I went to Japan for one major reason: to eat.

As I admitted before, last time I visited Japan I didn’t have quite the appreciation for food that I do now. This time around both Mike and I were ready to eat allll of the things.

First of all thank you everyone for not yelling at me about eating sushi while pregnant in my last post. I was hesitant to put that out there but so far everyone has held their cool admirably.

It’s funny though, because when I think of the best stuff I ate in Japan, sushi wasn’t even near the top. I mean the sushi is great, don’t get me wrong, but there is so so so much more to Japanese food than sushi.

Here are some of the most amazing meals we ate during three weeks in Japan, in no particular order: 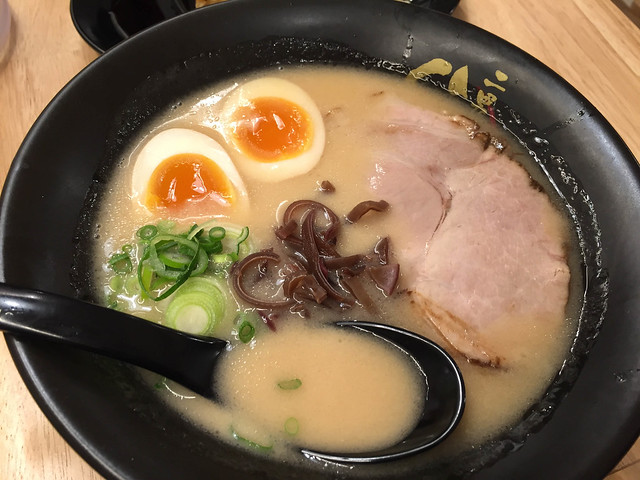 It’s hard to pick the best bowl of ramen we ate in Japan, partly because we ate so much of it and partly because it was ALL so damn good. Even fast food vending machine ramen in Japan tastes better than most of what you can find in the states. I’m not exaggerating. Still,, I’ll give my top ramen spot to the first bowl we enjoyed on the trip, at a small no-name place down a sidestreet in Kanazawa. The kind of place where there are only two things on the menu (ramen and a bigger bowl of ramen), the noodles are chewy and the broth is beyond savory. Nothing fancy, nothing out there, just really good ramen. 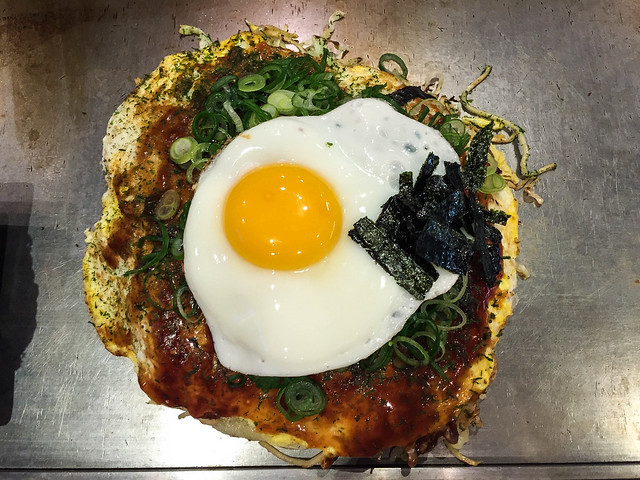 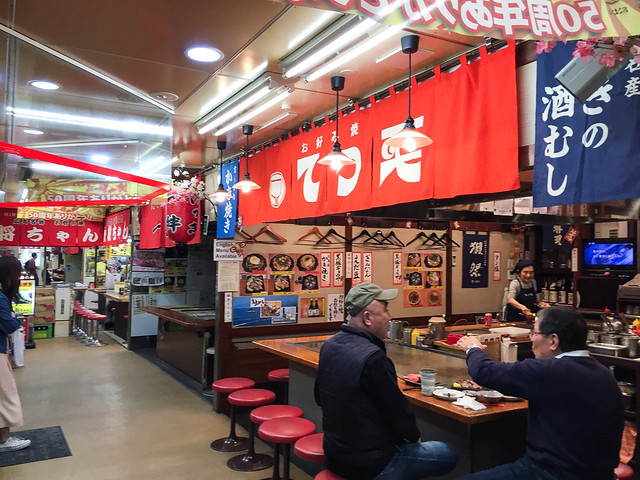 Okonomiyaki is such a strange mishmash of a dish. Hiroshima-style okonomiyaki is made with layers of cabbage, eggs, pork belly and batter cooked on a grill and topped with a thick sweet sauce. Mike was very eager to try it so our first night in town we headed to Okonomi-mura, a literal shopping mall featuring floors of different okonomiyaki restaurants. It was impossible to tell one from another but we ended up at a brightly lit counter on the third floor where an older woman grilled us the most perfect okonomiyaki, with a sunny yellow egg on top and a side of grilled gyoza. It was cheap, filling and just so so so delicious. 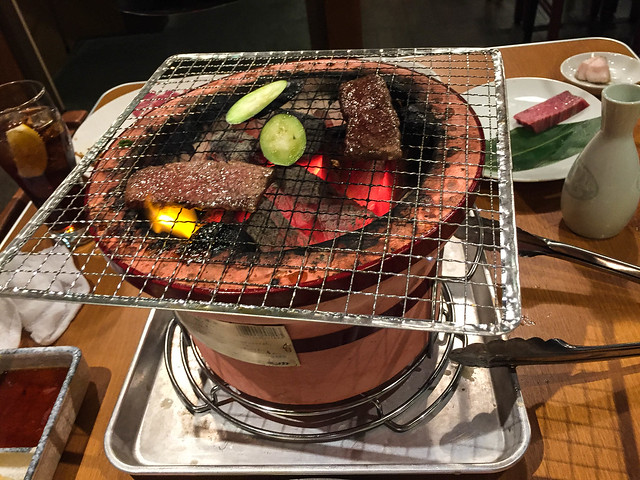 The neighborhood where we stayed in the city of Fukuoka was a warren of hip little shops and restaurants, crawling with young hip urbanites. It also seemed to be a hotspot for BBQ joints, and Mike was immediately taken with the idea of grilling our own meat tableside (Japanese BBQ is quite similar to it’s more popular cousin Korean bbq). As usual we picks this spot more or less at random and ordered a set meal involving some VERY buttery steak, sausage, pork and veggies and a little charcoal grill. We had to overcook everything a little for the baby but maaan it was still so so so tasty. 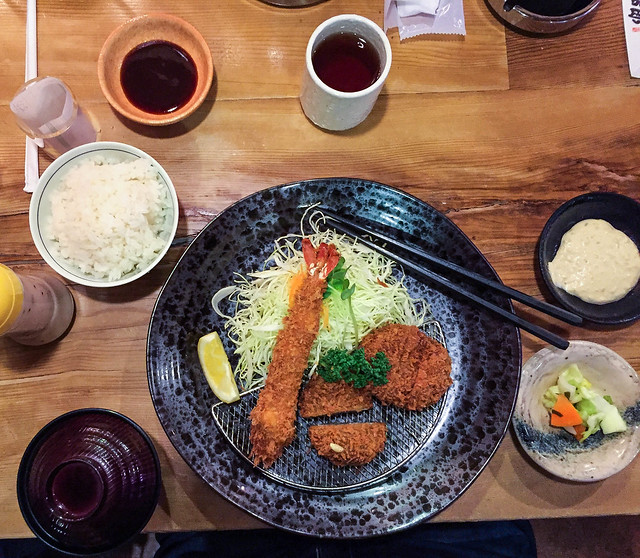 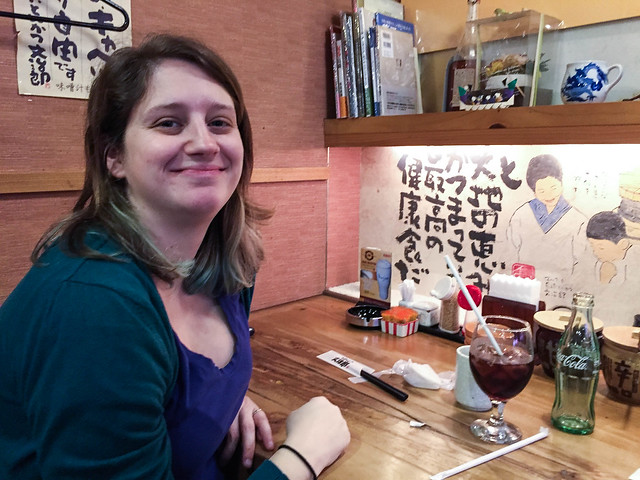 Nagasaki was truly a gem of a city- beautiful, interesting and really terrific food. We found Bunjirou on recommendation from our hostel, and it was SO good we ended up eating their twice! Bunjirou specializes in tonkatsu, breaded pork cutlets, although they also made terrific ebi-furai (breaded, fried prawns)l The lunch set was a terrific deal: unlimited rice and miso soup, salad, one or two pork cutlets and a prawn. Plus home made dipping sauce. So filling, so delicious. 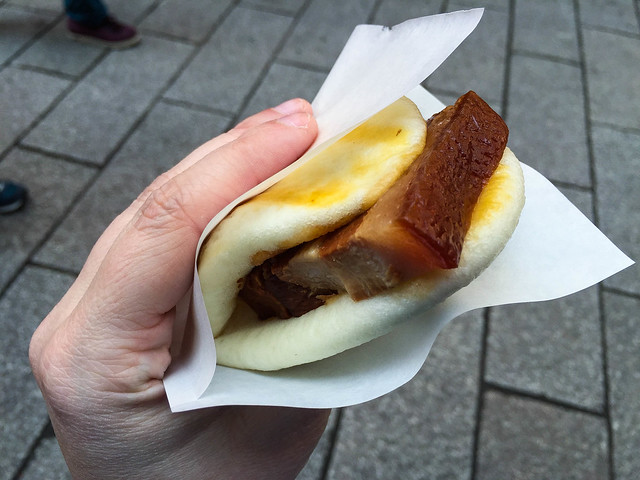 Nagasaki has such an interesting history. As the only open port in Japan for many years, it absorbed quite a bit of international influence, and developed it’s own unique brand of “chinese food.” We weren’t crazy about the area’s iconic dish, Champon, which is a fishy, noodly stew. We did however LOVE the street food we found in Nagasaki’s chinatown, particularly the kakuni-manju, braised pork belly on a steamed bun. Super fatty, super tasty, I could eat half a dozen right now (I would probably die though). 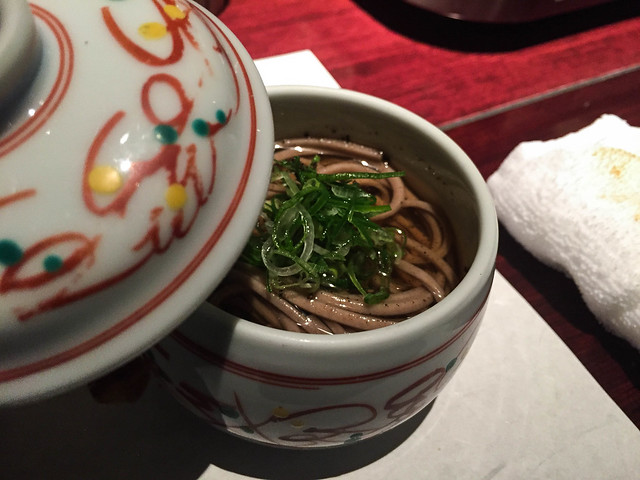 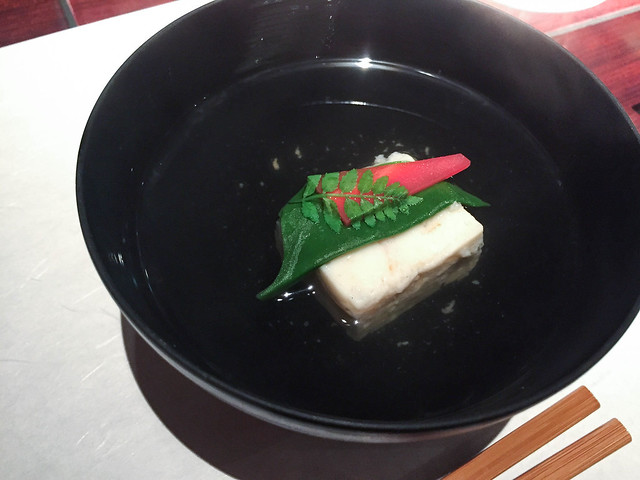 Kyoto is a hotspot of fine dining and Mike really wanted us to have a nice kaiseki meal while we were in town. Kaiseki is simply an elegant, multi-course meal, served in a traditional setting. They can be simple or really quite elaborate and can cost hundreds of dollars. Some need to be reserved months in advance. We are not nearly so organized, so we found our kaiseki meal while wandering the long alleys of Pontocho. We simply found a place with a reasonably price, english menu and went for it.

What followed was about 8 courses of artistic and delicate feasting. Some courses were presented in small laquer boxes, others with artful decorations. There was a sashimi plate, cold soba noodles in broth, elegant tempura vegetables and more. The centerpiece was a simple but flavorful tofu stew. The meal ended with some green tea ice cream. 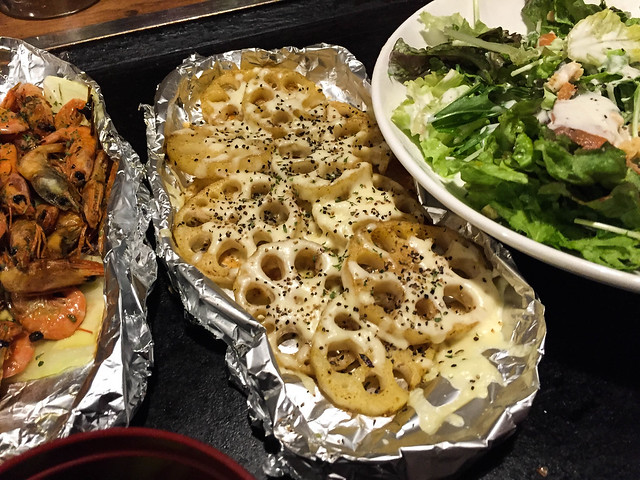 We were in Kyoto for a wedding, and one of my very favorite meals of the whole trip was the very casual rehearsal dinner at Hanatanuki near Kyoto Station. The bride’s parents organized the whole menu which meant we were treated to all sorts of dishes we would have never thought to order otherwise: yakiudon, juicy fried chicken, and more okonomiyaki. My favorite dish was a simple plate of fried lotus root, topped with cheese and oregano. It tasted like pizza! 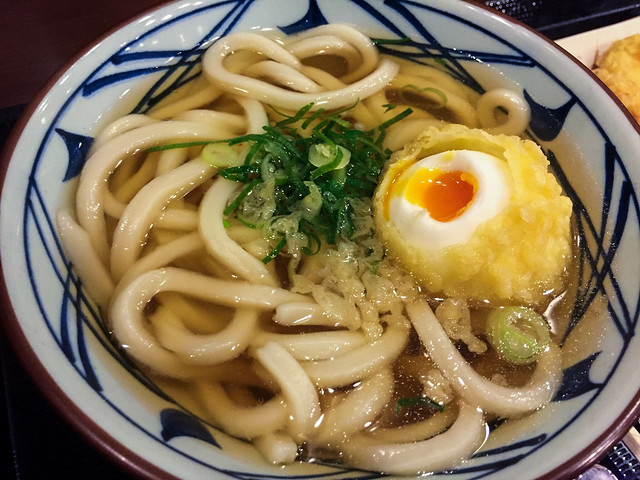 I’m almost embarrased to list this because it was essentially fast food, but I’m still thinking about the thick chewy udon we got at Marukame Seimen near Shibuya station. They specialize in sanuki udon, with very thick noodles, made in house. You pick what kind of broth you would like, hot or cold, then select from a buffet of tempura fried toppings. It’s super easy, even for non-Japanese speakers, super cheap, and most importantly, super delicious.

Did I mention the tempura fried egg? I still dream about it. 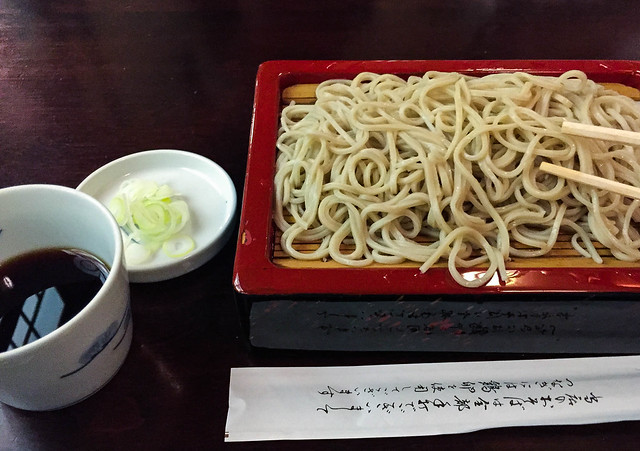 One of the most simple meals we had all trip turned out to be one of the most memorable. TripAdvisor actually led me to this quiet neighborhood shop, just a few blocks from the lights and noise of Akihabara. Once inside, the owner’s 8 year old son helped us decipher the menu, and recommended the most basic dish- handmade soba noodles, served cold with a salty, umami infused dipping sauce. Nothing too it, but when the ingredients are this good, what else do you need? 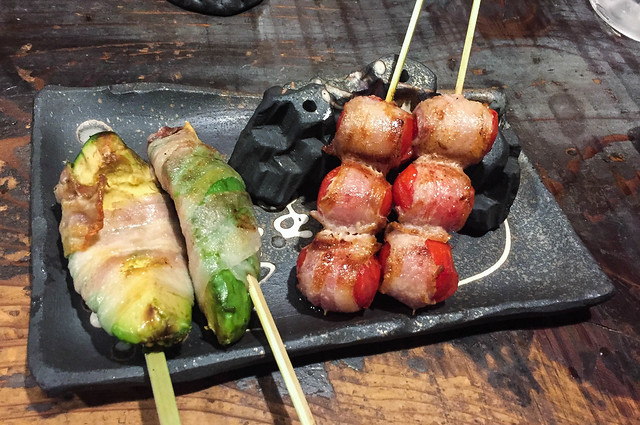 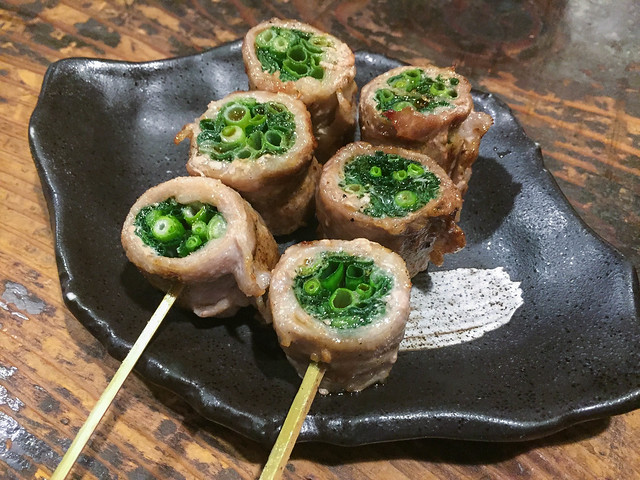 One of my major frustrations with Japan is the smoking inside of restaurants! Even if I wasn’t pregnant, the idea of enjoying a delicate meal surrounded by air pollution is pretty unappealing. Unfortunately avoiding the smoke meant cutting out pretty much all bars, izakayas and yakitori joints.

For our last dinner in Japan I was determined to sample some decent yakitori. We decided to investigate a tiny place in the base of our apartment building that didn’t look too smoky, and we were beyond surprised. A lively staff served us all sorts of treats on a stick- from your basic chicken to grilled avocados wrapped in bacon.

Of course that doesn’t even begin to touch on the many many bakeries, vending machine restaurants, bento boxes and street snacks we sampled during our time in Japan. It really is a food paradise, where it’s genuinely difficult to have a bad meal. Still these 10 were all memorable enough that I’ll be thinking about them for a really, really long time.