India has always been at the top of my travel bucket list and it’s the one destination that scared and excited me simultaneously. Just recently, I was able to cross off this amazing country off my list and though I enjoyed every minute of my time, India is definitely not without its fair share of challenges. With that said, here are some important travel tips to know before your trip to India that I picked up along the way:

I preface this tip by saying I’ve travelled to South East Asia multiple times and I was born in the Philippines so I’m not exactly foreign to humidity but India’s heat is the most extreme I’ve ever experience – triple digits in Fahrenheit with humidity at least in the 50s percentile. Though Mumbai tends to be cooler than New Delhi by at least 10*, make sure to pack wet naps (or some kind of cloth to dry yourself) and take multiple water breaks. In addition, definitely wear clothes made of light material and light colors – jeans are no good in India, especially with all the exploring you’re going to be doing.

Stay Safe and Illness Free in India With These Tips for Your Trip to India!

When you’re in India, don’t fret when Indians start staring at you and taking photos of you (and sometimes even with you). Right at the beginning of my trip, I noticed this immediately so I asked a local about it. It turns out that most Indians who visit the same landmarks tourists do are from villages who have never seen a foreigner before and therefore want to take photos to show them to their family at home. So don’t be alarmed if you get some stares or get asked to pose for photos – embrace your “celebrity” moment; it’s all harmless and part of the experience.

Because most places in India open at sunrise and close at sunset, you can get an early start for most of the major landmarks, including the world famous Taj Mahal. As India is one of the countries with the most population, popular places get very congested so getting a head start allows you to beat the crowd, especially if you’re going to visit places that attract a large number of tourists, such as the Taj Mahal. Lastly, as India’s heat gets unbearable in the afternoon, visiting places when the sun is not at its peak makes traveling a wee bit more comfortable.

India has a two-tiered price system

Most, if not all, landmarks and popular tourist spots in India, have a two-tiered price system where Indian citizens pay a significantly lower fee and foreigners pay a more expensive price. With that said, these same locations also have a separate entrance for Indian citizens and foreigners, which helps alleviate the flow of traffic. As an extra tip for your trip to India – make sure you have your student ID with you from college as some places will give a student discount, regardless if you’re an Indian citizen or not. For instance, the entrance fee at the National Museum in New Delhi is only 1 Rupee with a student ID – that’s not even a penny in US Dollars!

As a traveler, you should always be on your guard and India is no exception. In India, the rule of thumb is to learn how to say “NO” many times as tuk-tuk (rickshaw) drivers will try to convince you that certain locations are close when they’re not and take you to markets and bazaars where they get a commission. Before getting on a tuk-tuk, make sure to establish a set price and where you want to be taken, with no side stops. Similarly, when you’re traveling via train to Agra (the city where the Taj Mahal is located), avoid people telling you there’s a tourist tax you have to pay. One man tried to convince me I had to pay 2000 Rupees when the tourism office was not even open at the time. Often times, scammers try to lure you away so you miss the train and don’t make your final destination.

So now you are prepared for your trip to India!  Remember to keep these 5 things in mind when you plan your trip.

Need more tips for your trip to India?  Check them out here!

Kirstin Carag works in entertainment publicity. When she’s not promoting films and TV shows, she’s busy seeing the world and planning her next adventure or eating her way through life – one French Fry at a time. Follow her random rants at @kcarag. 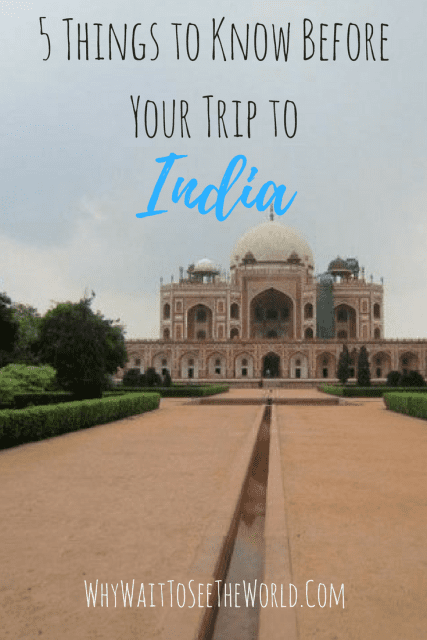