I spent a few weeks in Mexico recently, and it really impacted me. I haven’t been able to stop dreaming about my time in that awesomely delicious country since I sauntered across the boarder to Guatemala. Because I can’t stop thinking about it, I can’t stop writing about it! This one is going to be a little different though. I’m going to admit that I didn’t do my trip right. In fact I made a lot of travel mistakes when visiting Mexico.

BUT I get the opportunity to make the lives of future Mexico visitors better by sharing my mistakes with them to make them better travelers.

First piece of advice: get the heck away from Cancun and Cabo! Mexico is awesome. Mexico is filled with adventure. And tacos. What more do you need to convince you to see a country than the opportunity to eat as many tacos as humanly possible.

If you must go to Cancun, get off the beaten path!

Did I mention tacos?

Anyways, because it is such a vastly misunderstood country it’s easy to make mistakes when planning a visit there.

I Made 6 Travel Mistakes when Visiting Mexico

I didn’t plan anything about my visit.

Like most countries, a lot of the infrastructure of Mexico was a bit difficult to figure out. In Cancun and Mexico City, hiring a taxi at the airport was totally different to anything I’d ever experienced. The bus schedule, stops and ticket desk were so elusive to me. I wound up having to spend a lot of extra money in taxis and Ubers to get back and forth from the bus station a few times buying and changing bus tickets.

If I could do it again? I would set some tentative ideas of the regions or cities I wanted to visit. I’d spend some time mapping out a route and asking around in forums for the best ways to get from one place to another.

I ended up in the border town of Tapachula expecting to find a certain bus company stand in the bus terminal and wound up finding no such stand and no simple way of booking the next leg of my bus. Fun fact, if you’re in the Tapachula ADO bus terminal and you’re trying to continue on to Guatemala City, the ticket office for the next round of buses is across the street in a room under a hotel there. It’s not marked. Ask around.

It was a pretty frustrating example of how I should have done a little more research before my trip.

I expected it to be extremely dangerous and dodgy.

Let’s be honest and real for a second. Mexico has a bad reputation. I expected to have to hide money in my shoes, not venture out after dark, and be extremely cautious while sightseeing. I have to say I probably missed out on a lot during my visit because I was so apprehensive to actually relax and enjoy my trip. I feared that the second I let me guard down, something was going to happen.

I bought my ticket to Cancun and had absolutely 0 intentions of going anywhere else in Mexico. Once I started talking to other travelers I got recommendations for all sorts of places. I let their accounts persuade me into trying out Mexico City and then Oaxaca.

I fell madly in love with both of these cities for very different reasons. And I still shudder to think I almost visited them because I let social stigmas drive my travel plans.

Even after getting to Mexico City, I still heard warning after warning about how dangerous the subway was. Even from locals. BUT the subway was 5 pesos and taxis to downtown were 80-100 depending on traffic. See the dilemma? Luckily, I had met a fellow traveler during a weird Cancun airport experience and we had spent a few days traversing Mexico City together to calm our nerves.

We decided to brave the big bad subway together, at daylight, from tourist neighborhood to tourist neighborhood. We spent 10 minutes outside the entrance to the subway securing all of our belongings, taking deep breaths and telling each other that the second one of us feels unsafe we will get off.

And what happened once we got into the subway??

We were surrounded by people in business suits, professionals, all around well put together people. We were actually drawing more attention to ourselves by being so cautious. I ended up riding the subway a few more times during my visit. Every time I felt a bit of a terrifying thrill run through me, only to have it be completely eased upon stepping into the subway car.

If I listened to the words of others I would have probably ended up spending over $100 extra on taxi rides during my time there!

I didn’t branch out enough and see enough of the country.

This goes hand in hand with the points above. I just couldn’t shake the nervousness I felt.

I was too scared before my trip to even think about seeing any other part of the country besides the well beaten path of Cancun.

And once I was traveling within Mexico, I kept waiting for the shoe to drop. I kept expecting to come face to face with the dangerous side of the country so I wouldn’t look into visiting other parts of the country solo.

I didn’t expect to need to know much Spanish.

This was a super rookie move on my part. I PREACH learning some of the local language when visiting somewhere. To be fair, I expected to only be staying in Cancun, which is a hyper touristic area chock full of English speakers if you haven’t heard of it (HA!).

I did, however, have the opportunity to take a week long Spanish crash course from Cristina who owned the Airbnb I stayed in in Cancun. I soaked in as much Spanish as I possibly could in those 7 days and still didn’t feel like my language skills were adequate enough for my traveling needs.

Just to toot my own horn, my skills WERE higher than a lot of other travelers, ANDDDD I paid it forward often and helped out my fellow backpacker in negotiating directions, rooms and food whenever I could.

With my experience in French, I think Spanish would have come to me easily. I feel like I wasted a lot of potential opportunities I could have had to interact with locals because of this language barrier of sorts.

If you want to avoid my mistake and actually learn some Spanish beforehand definitely download the app Duolingo. It makes learning a language simple and almost like a game. I would do 20 minutes of lessons before bed during my trip and that really helped a little! Bonus: it’s free!

If you’re looking to actually take your Spanish learning somewhat seriously, I recommend an audio disk or full package like this. I even recommend booking yourself some Spanish lessons for a week or two somewhere before starting your trip. There is no better way to learn a language than by being immersed in it.

I made the silly mistake of thinking, hey! it’s Mexico! it’s closer to the ocean than NY it’s gotta be like 90 degrees!

The truth: only the coastal areas are usually stiflingly hot. Mexico City was a bit chilly. During the day, as long as the sun was out, I was good with shorts and a shirt. But most days I opted for jeans and a blazer.

I only brought one pair of jeans and a pair of leggings when it came to pants. So after 10 days of alternatively wearing each, they were officially really dirty. I could certainly have benefited from a few more options.

I just didn’t try enough variety. I fell in love with a few dishes and just couldn’t help but eat them every chance I got. Have you ever tried actual, real, authentically delicious tacos al pastor? It baffles me that this country as a whole ever developed any other food groups than slow roasted pork, tortillas, and pastor accompaniments. Mexico’s cuisine is vast and has a lot of dishes and ingredients that the average person knows nothing about.

I wish I had dove further into the markets, deeper into the street vendors and asked around for the secret hot spots more. 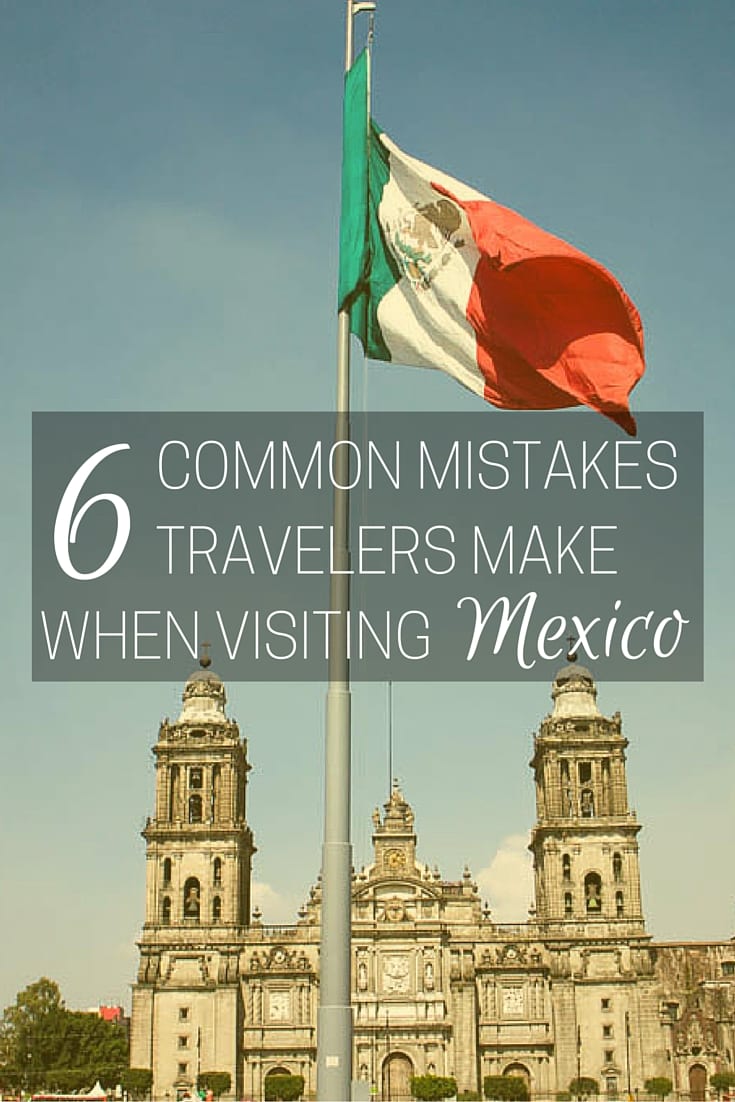 Have you ever made any mistakes when visiting a country? Were they in your planning process or once you got there? Did you fix it somehow during your trip?

1 thought on “6 Mistakes I Made When Visiting Mexico”