What is Portuguese food anyways?

This was the question I asked myself almost immediately after we booked our plane tickets for Porto. I was intimately familiar with Spanish, Italian, even French food, but for some reason Portuguese food was big old blank.

I’m not sure why Portuguese food doesn’t get the same sort of fanfare as other western european cuisines, because everything we ate during our week in Portugal was exceptionally tasty. I learned that Portuguese food is rich and varied, with a few constants mixed in. I couldn’t sum it up in a single article, no matter how hard I tried, so instead I decided to tell you about 7 iconic and delicious dishes you absolutely must try if you visit Portugal: 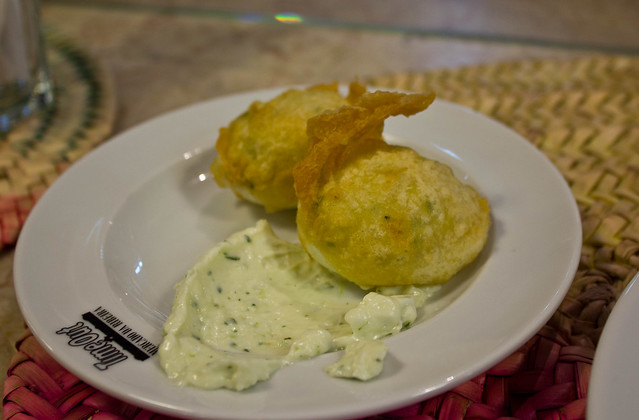 I never knew how important a single fish could be to a country’s cuisine until I learned about bacalhau. Salted cod forms the basis for hundreds of different Portuguese dishes, and its ubiquitous in both supermarkets and restaurants.

Not being a huge fish fan, I was a bit intimidated to try bacalhau for myself, so I went for these bacalhau fritters (I mean, anything is good if you fry it enough) and they were quite tasty!

Two kinds of sausage that are common appetizers in Portugal. Alheira is very unique and was invented by the Jews during the Portuguese Inquisition (which I’m guessing was just as ugly as the Spanish version). It’s made with any meat that’s not pork, sometimes several different kinds mixed together along with bread crumbs. As such the texture is a bit different than traditional sausages. It’s a bit crumbly and nutty tasting, and usually served fried.

Morcilla you may be more familiar with. It’s essentially blood sausage (an obsession of mine). In Portugal they typically slice it thin and fry it up so that it’s both crunchy and juicy. Even if you don’t think you like blood sausage, it’s worth a try. 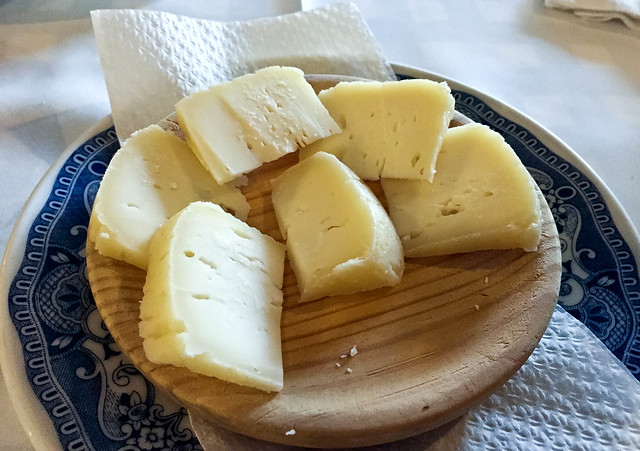 Portuguese cheese is super delicious, but not well known outside of the country, so you will of course want to try it at every opportunity. It’s usually served as an appetizer or side, not integrated with the main meal.

Most cheese in Portugal is made with sheep or goats milk which gives it a rich, nutty flavor. There are 15 official varieties, usually coming from specific regions of the country like in Italy. 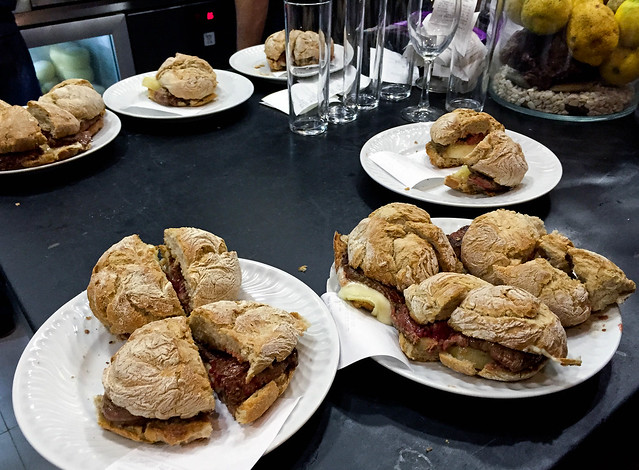 Mike and I got hungry while watching a football game at the local bar one night, and the only item on the menu was this simple steak sandwich. It was absurdly delicious: thin steak pounded with garlic and served with onions on a crusty bun. Best of all: unlike literally any meat I have ever had in Europe, this steak was served rare! I later found out a popular bar snack around the country. 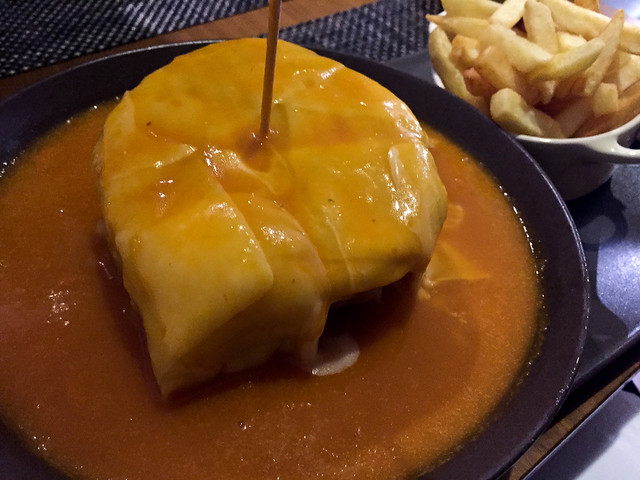 Another popular sandwich option is the Francesinha. Unlike the sandwich above, this one is extravagant as hell, and best served in the city that invented it- Porto.

Each restaurant makes theirs a little differently but the basics are a sandwich made of ham, steak or sausage (or some combination), covered with melted cheese and a tomato-beer sauce. Usually fries come alongside for sopping up the mess. It’s a monster, messy, food challenge kind of thing, best taken when you are super-duper hungry. Mike and I split the one above which was served in a soup bowl. 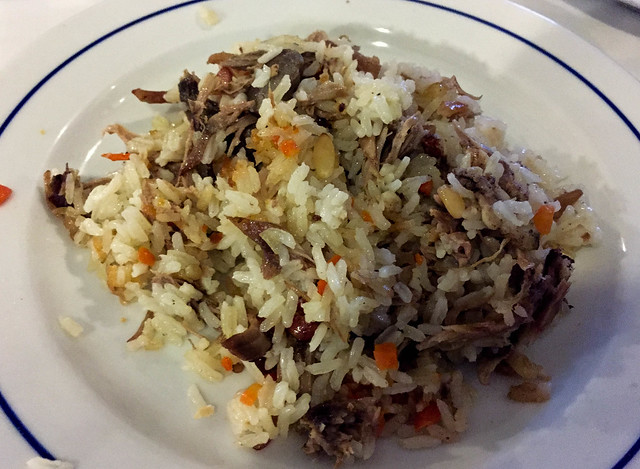 A lot of Portuguese main meals are very meat and potato centric, but duck rice is also popular and common. It’s simply fragrant rice cooked with shredded roast duck and chorizo. It’s similar to Chinese fried rice in it’s consistency and appeal, but the flavors are more rustic. Portuguese comfort food I imagine.

When I ordered this at a restaurant a humongous serving dish was brought out and the food was scooped directly onto my plate. 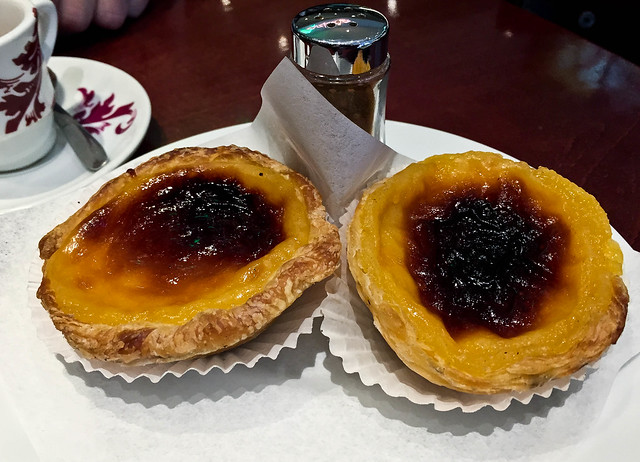 Portugal is a country with excellent pastries (trust me, I would know), but none stand out quite as much as their national pastry, the pastél de nata. A small tart made mainly with egg yolk custard, sprinkled with powdered sugar and cinnamon. Biting into one is a revelation: the top is crispy, the inside is creamy and the crust is chewy. They’re rich, but small, simple but obsession forming.

I could write a love letter to these little egg tarts. Over the course of our time in Portugal Mike and I became absolutely obsessed with them, seeking them out 2, even 3 times a day. It’s a good thing we left when we did, otherwise I’d probably be surviving on nothing but pastéis de nata now.