Last Friday I was contacted by a reporter from the Daily Mail, asking my opinions on “dangerous countries for female travelers.”

Now, as an avid internet procrastinator I’m pretty familiar with the Daily Mail and their sensationalistic brand of journalism. I had a pretty good idea where this article was going when I agreed to contribute, but I thought just maybe I could interject some reason to counteract the eventual fear-mongering. I sent the reporter my article on why solo female traveler is not the problem, as well as my honest opinion:

“I’ll also be up front that I strongly believe that most of the perceived dangers to solo women travelers are overblown and sensationalized by the media. Traveling as a woman is different than traveling as a man but I don’t think it’s inherently less safe.”

The article came out on Sunday, you can see it here: Sex attacks, muggings and harassment: World’s most dangerous holiday destinations for women (and some of the places may surprise you).

I’ll admit, it was pretty cool to see my name in such a big publication- even if it was misspelled as Stephanie Yodel (“London based blogger Stephanie Yodel”, in fact) [Edit: This has now been corrected]. My friend Amanda Williams was quoted too, and considering that we are both pretty strong advocates for female solo travel, I’m sure she was as disappointed as I was at the final product. Actually I know she was, because she responded with this.

Aside from the truly unfortunate title, there are a few reasonable moments in the article, mostly quotes from travel bloggers who understand that of course women need to think more about their safety than men do, but that this shouldn’t be a deterrent to seeing the world.

The rest of the article is textbook scaremongering, complete with stand alone anecdotes and shoddy figures. Most of the data in the article is pulled from a website called YouGov, an internet based market research firm which seems to specialize in opinion based polling. This becomes apparent in the weird sidebar on “Cities with the Most Unsafe Transport Systems for Women.”

That is some staggering misinformation.

I feel a little bit terrible ripping apart an article that quoted me, but I think we need to call out bad journalism when we see it. So, I will combat misinformation the only way I know how, by steering you towards better information. Let’s go down the Daily Mail’s list of The Most Dangerous Destinations For Female Travelers:

I understand why India made the list- a lot of women have anxieties about visiting, especially after a couple of very highly publicized rape cases in the past year.

I haven’t been to India myself, so I can’t speak to the experience of traveling there. However, I do know quite a few women who have traveled extensively through the country without problem. Most notable is Mariellen Ward from Breathe Dream Go who loves India and spends months at a time traveling alone there. She is definitely your go to expert for India safety tips.

Brazil definitely has a lot of social problems, however most of them are a problem solely for the poor and disenfranchised Brazilian people. This is a classic example where widespread crime affects locals disproportionately to tourists. You will see this again and again on this list, and it’s an important lesson on keeping crime in perspective.

Our own staff writer Kay Rodriguez traveled extensively in Brazil during her year of study abroad.

Turkey was a popular punching bag a few years ago when Sarai Sierra went missing (link). People were quick to jump on her for visiting such a “dangerous country.” It turned out that what happened to Sierra could have happened anywhere in the world- she was murdered by a drugged-up homeless man.

Blogger Katie Nadworny, who I met in Sri Lanka, blogs about living in Istanbul. Christine Gilbert from Almost Fearless, one of the smartest ladies I know, is currently traveling in Turkey alone with her two young kids.

I have literally no idea why Thailand is on this list, other than that it is a place people like to go. I felt extremely comfortable traveling alone in South East Asia. The article offers this:

According to Thailand Domestic Violence Information Center, violence against women is a growing problem in Thailand, fuelled, in part, by the widespread availability recreational drug Yah Bah as well as alcohol.

Domestic violence may indeed be a serious problem but violence against foreign by thai people is still extremely rare.

Alana Morgan lives in Thailand (and dates a Thail man) and wrote this on her blog:

Of course you need to be aware of your surroundings, who you’re with and what you’re doing, but I’ve never felt unsafe, threatened or in danger in Thailand. As a woman, I’m barely even given a second look by most Thai men and as a whole places (and people) are safe and welcoming. I’ve been catcalled more in the past month in the U.S. than I ever was in Southeast Asia. 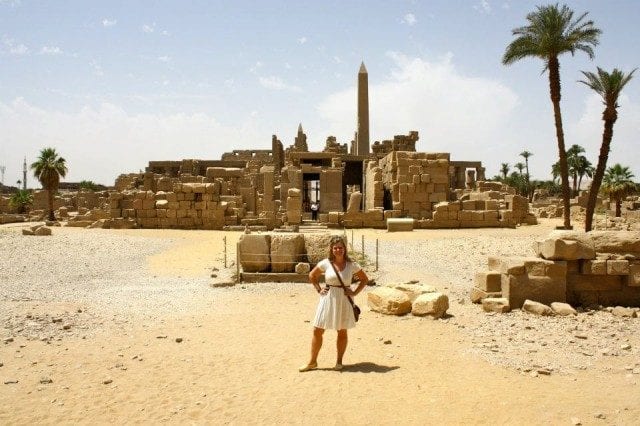 To be perfectly honest: of all the places on this list, Egypt probably gives me the most pause personally. I have heard a lot of stories about street harassment in Egypt from women traveling alone. It’s also true that it’s a country experiencing a significant amount of political unrest right now. Liz Carlson wrote about her experiences being harassed in Egypt awhile back. Does this mean you can’t go? No, but you should do your research first and know what to expect.

Then there are countries on this list that just make me shake my head in disbelief. I know it’s a popular scapegoat, but throughout my 9 months in South America I never felt safer anywhere, than I did in Colombia. In Argentina and Ecuador I was constantly watching my back and my posessions, but in Colombia I felt safe and relaxed, even when I was alone.

The arguments in the article are weak. A callback to the weird public transportation list from earlier and this:

But while the country is undoubtedly far safer than it was even 10 years ago, sexual violence against women remains widespread, particularly against displaced women in poorer areas.

I have no doubt this is true and supremely unfortunate, but it conflates two different issues: violence against local women and  foreign travel to Colombia.

South Africa’s terrible rape rates do give me pause. The article states that

Adventurous Kate is a big fan of South Africa and wrote a great article on safety there. According to her, it is possible to travel safely alone in South Africa, but you do need to take certain precautions.

I think the DM may have been running out of steam at this point because even they admit:

Although the Foreign Office advises that violent crime isn’t currently major issue, it’s common for female tourists, particularly those travelling on their own, to be routinely harassed by men.

This actually fits well with what I’ve heard, which is that street harassment is common, which can be exhausting, but not dangerous. I like Lauren from Never Ending Footsteps advice for women traveling solo there:

My time in Morocco was challenging but it was rewarding, too. As long as you’re fully aware of what to expect, stay positive, dress respectfully and take time to rest when the hassle gets too much, there’s no reason you can’t have a safe and enjoyable trip.

I wish I hadn’t saved Mexico until the end because now I simply don’t have the energy to get worked up about this mischaracterization of a country I called home for nearly a year. Go back and read my article on safety in Mexico if you want some righteous indignation. Bottom line: as long as you’re not traveling through a conflict zone, Mexico is extremely safe, welcoming and wonderful, even for solo females.

Here’s the major problem with this article: It’s not just that it’s misleading, it’s that it’s actively harmful to would be female travelers. This scaremongering cloaked in concern isn’t designed to help anyone. It’s meant to validate outdated opinions and to scare people.

And aren’t women scared enough already? Most women I know are scared all the damn time, of things real and imaginary. That is WHY solo travel is such an important tool: it forces you to separate the hype from the reality and to really get to the truth. It’s empowering.

Another important point I told the reporter which wasn’t included: the one time I’ve felt truly unsafe on my travels wasn’t in Mexico, or Thailand, or South America. It was in London, when a man followed me down the street begging to take my picture. Bad things can, and do, happen everywhere in the world. That alone can’t be a deterrent to travel.

If you happen to be one of the people that clicked over to this blog from the Daily Mail article, I hope this will be your takeaway: Think for yourself, do your own research and don’t let fear stand in the way of your dreams.