Ahhh, the world of Arabic sweets and Middle Eastern desserts. As a Latina, my sweet tooth is omnipresent. I remember my mom requiring dessert after every meal– including breakfast. And so the ritual followed me to the Arab world, where I lived, studied, traveled and eat all the Arabic sweets for 16 months. Below are some of my favorite Middle Eastern desserts, including only those that I had not even heard of while living in America.

When I had my first basbousa square in Egypt, I didn’t know what to think. Maybe it was the impending-death thoughts while crossing the street in Cairo that ruined my experience of one of the iconic Arabic sweets. But after having it once more during the month of Ramadan, the syrup-soaked goodness grew on me. Also known as hareesa or revani (Turkish) in other parts of the Mediterranean, the semolina (or sometimes farina) Middle Eastern dessert tastes best with a touch of orange blossom or rose water mixed into the batter, topped off with almonds or pistachios right out of the oven.

Halvah is believed to be one of the oldest desserts in the world not just in the realm of Arabic sweets, dating back more than 3,000 years and is a crumbly sweet made from tahini generally. Naturally, its origin is widely disputed and halvah varieties can be found not only in the Middle East, but also in South Asia, Central Asia, West Asia, North Africa, the Horn of Africa, the Balkans, Eastern Europe, and in some Mediterranean islands. Since I have an odd pet peeve when it comes to texture ( the reason why I don’t like most fruits), it was odd to have a slice of solidified tahini (sesame paste) as dessert. I first had the Israeli halvah while kibbutz Couchsurfing and hitchhiking one summer. I had it with milk and it was the perfect pair–just like milk and Oreos are.

I like pudding, any way you cook it. So it wasn’t a surprise for the sweet umm ali to become an instant favorite of mine when it comes to Arabic sweets. But please, oh please, never have this delicacy cold. It is one of the few Middle Eastern desserts that must be hot in order to be enjoyable. Opinions may vary, but I feel the hot condensed milk, dripping out of the puff pastry, tastes best this way. Add shredded pistachios, almonds, and/or raisins for crunchy, chewy bites.

The original sweet cheese pastry is from Nablus, Palestine. However, there are 3 different types of Middle Eastern kunafa: Khishnah (خشنه) is the crunchiest variant, made with long noodle threads; na’ama ( ناعمة) is made with semolina dough, with a softer bite; and mhayara (محيرة) is made with both crunchy noodles and softer semolina (Wikipedia). My favorites are the Egyptian kunafa fingers: Noodle rolls stuffed with ricotta cheese, rose water, vanilla, cornstarch/milk mixture, and topped with pistachios.  This pastry can be found all across the world of Arabic sweets.

Have you tried any Arabic sweets or food?  What was your favorite? 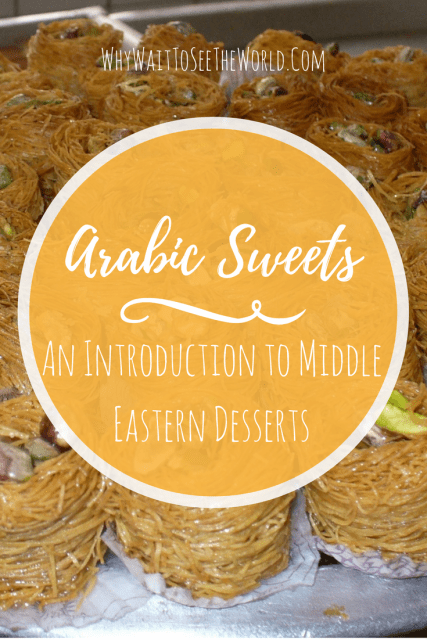 Completely enamored with the Middle East and Africa, Maria Laborde is a twenty-something budget traveler that has lived, studied and traveled extensively throughout the region. Through tales, tips, travel guides, and everything in between, she shares her knowledge and love for the Arab world on her niche blog Travel The Middle East. Moreover, Maria is the author of LatinAbroad | Nomadic Translator, where she shares her tales, photos and advice after traveling to more than 20 countries across 4 continents.

1 thought on “Arabic Sweets: An Introduction to Middle Eastern Desserts”