One of the first things I did when I began this blog is set up an interview with Alex Pollack, a college friend of mine and an awesome writer. Like me, Alex decided to go abroad after graduation (to teach in Korea), and like me, he caught the travel bug. This month, he’s taking a break from his MFA program to spend a month studying Spanish in Buenos Aires. For the next month or so I’ll be featuring his stories and insights every Thursday.

I opened my eyes and saw a saucy blur of light.  Everything was out-of-focus: from the optometrist’s diploma on the wall to the cell phone screen glowing like a solar eclipse in my hand.  I had just gotten my pupils dilated at an Orlando-area Walmart Vision Center; in five days, I would be flying to Buenos Aires, Argentina for a month-long stay.  I’d wanted to make my eyes right and ready for the country’s baroque architecture, stacks of flank steak, Diego Maradona futbol jerseys, and whatever wonders it had to offer beyond the scope of Wikipedia.

The optometrist gave me sunglasses.  The plastic handles pinched my ears and the windshield shades clipped my nose, dimming and purpling Walmart’s fluorescent lights.  I could see again.  Kind of.

After a McDonald’s lunch in which the cute cashier seemed to ignore my smile, I found myself in a mirror.  I laughed. 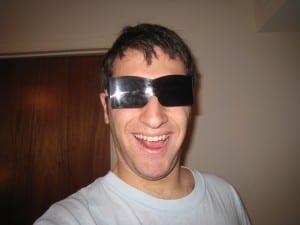 Though I looked like a vacationing Mr. Magoo, the students I passed in the breezeway of the University of Central Florida looked neither impressed nor depressed by my appearance.  I was just a dude in space cadet frames, no better or worse than the “normals” around me.

“Hey, Cyclops,” my co-worker Chris said.  Cyclops. He’d said it like a curse word.  I was squinting at the computer in the Florida Review office, temporarily incompetent at my lit mag proofreading gig.  “Did you just come in from the geriatric ward?” he asked.

This ribbing from Chris made me think about my soon-to-be status as a foreigner in Argentina; will I wear my Americanness like a purple windshield on my nose, and if so, will the Argentines look beyond my frames and see a cool hombre?  Or will they see a Cyclops?  The issue might lie more with my own assumptions, and what I will choose to see through my purple windshield.

As I write this, my eyes are improving to the point that I’ve tossed aside my Magoos.  I’m excited for the sights of Argentina, but I’m aching for the smells I have not yet sniffed, like the scent of an Argentine woman’s hair sweeping through a bustling tango hall, or the smell of morning near Eva Peron’s grave at La Recoleta Cemetery, or the smell of night in tourist-saturated San Telmo.  From The Travel Channel, I can conjure Argentina’s pictures and sounds, but not its smells.  Not yet.

In a few hours, I leave for Buenos Aires.  By day I will participate in a Spanish immersion program; by night I will explore what this capital city has to offer.  I hope you’ll join me for the ride.

If you’re thinking about visiting Buenos Aires and would like to know more about my preparatory costs, please read on.  If you’re here for stories, please tune in next time for an on-the-ground essay.

* Flight-> Roundtrip expense from the USA to Argentina varies depending upon the time of year and the region from which you fly.  To give you an idea of my own costs, I purchased a round-trip plane ticket for:

I bought the ticket on October 23rd for the following itinerary:

* Spanish Classes-> I’ll be participating in a twenty-hours-a-week Spanish immersion program at Expanish in the Recoleta area of Buenos Aires. (For more information on the school, click here.) I was placed in this school through Cactus Language, an international organization based in the U.K. (For more on Cactus, click here.)  I cannot yet vote yay or nay for the school, but the Cactus representative with whom I’m speaking has been a consistent and pleasant email contact.

* Accommodations-> I will be sharing an apartment with a guy named Alejandro, who according to Cactus, “works in Finance, speaks English and French, and likes soccer.”  Cactus gave me the option of doing home-stay with a family or adding meals to my residency, but I decided against it. (The cost would increase by $100-200 with these additions.)  My apartment stay will cost me USD542.50 for the month.

*Airport Transfer-> Cactus gives an option of this and I decided to take it; was I ripped off?  Maybe.  But after my ten-hour flight, I figure I’ll be safe and pay the USD 80 to get me to my new place.

Add everything up here (along with some pesky taxes) and you can expect to pay up to USD 2,500 if you want to fly to BA, stay for a month and learn Spanish (other language institutes I researched were in a similar price range as Expanish). From my understanding, food will be an affordable, but an additional expense. I’m not a rich man, so this trip is putting a dent into my savings.  But what can I say?  Argentina, te quiero.