Everyone told me not to go to Tangier. Although Tangier has its gritty charms, its grimy alleys and insistent hustlers are a relatively harsh introduction to Morocco; however, we were arriving in Morocco by boat from Spain, making Tangier a convenient and logical first stop.  Fortunately, Brent and I met some new friends who had heard about a small town along the coast, 30 kilometers south of Tangier, where we could skip the chaos for an afternoon and just enjoy all the things that make Morocco amazing.  Let me introduce you to Asilah, Morocco. 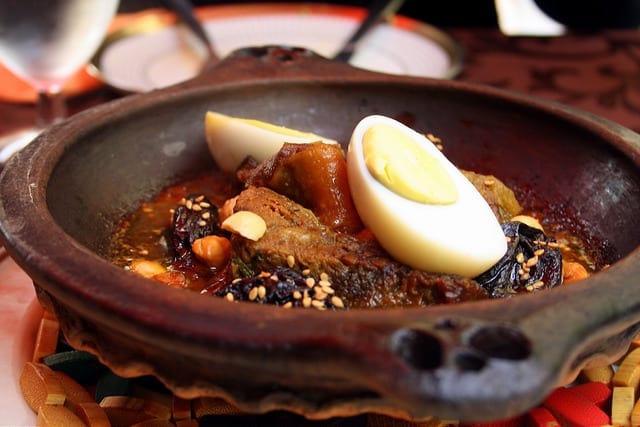 We spent about 8 hours in Asilah, Morocco and I’m pretty sure at least 3 of those hours were spent eating. We had one of those rare, perfect moments that sometimes occur when you’re traveling in which we chose a completely obscure, modest-looking restaurant and it turned out to make what I’m certain is the best food in the city.

I’d had maybe one or two tagines in my life before but, post-Asilah, I’m now completely obsessed with them. For those who don’t know, the name “tagine” describes a savory, slow-cooked Moroccan dish, as well as the cone-shaped pot in which it’s cooked. Traditionally, tagines are cooked over hot coals, although they can also be cooked on a stovetop over low heat. The pointed lid of the tagine locks in steam, returning moisture to the ingredients and cooking everything to perfect tenderness. The finished dish is usually left in the round bottom portion of the tagine for serving. It’s typically shared among a group, with diners using pieces of Moroccan bread to eat the tagine.

The tagines we tried are fairly typical: The first was a mix of beef, cinnamon, prunes, egg, and peanuts; while the second was made with chicken, olives, lemon, and other veggies – and, of course, both included an elusive and delicious mix of spices I could never hope to replicate.

I also drank far more Moroccan Mint Tea than anyone should reasonably drink in a single day considering that it’s packed with sugar. This sweet tea is made by steeping green tea with mint leaves. It sounds simple, but it’s insanely tasty. I was in it as much for the presentation as for the tea itself – it’s typically served in delicate silver teapots, called berrad, along with beautifully-decorated tea glasses.  We were so happy to stumble upon amazing food in Asilah, Morocco. 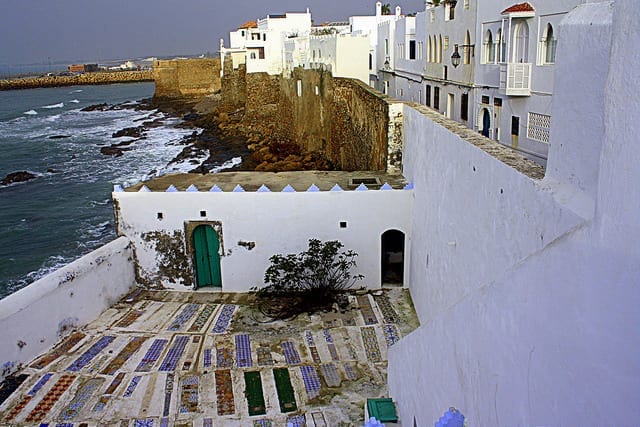 Like many Moroccan cities, Asilah has an old town called the medina, with entrances marked by massive stone arches. The pedestrianized medina is a maze of pretty courtyards, narrow cobbled streets, and whitewashed houses with bold blue doors. In Asilah, the medina is surrounded by stone ramparts, which were built by the Portuguese during the 15th century. Just beyond the ramparts, I could see the beach and weathered coastal rocks extending out to the ocean.

As cliché as it sounds, Asilah, Morocco really is one of those places where you easily can and should get completely lost wandering through the old-world alleys. Luckily, our aimless walking led us to one of the town’s most popular viewing platforms, Bab Krikiya, which overlooks the coast and a colorful patchwork graveyard. It was a spectacular spot to watch the sunset over the ocean.

Morocco is a fascinating country.  Learn more about travel to Morocco here! 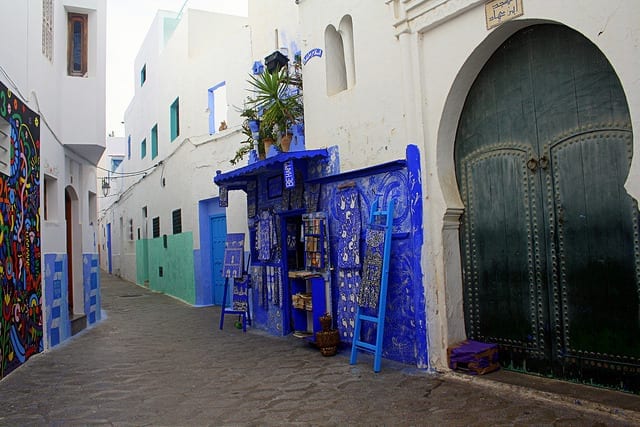 Asilah was ruled by the Portuguese beginning in the 15th century, and its proximity to Spain has helped the town to retain a distinct, almost Mediterranean atmosphere. Like most of Morocco, French and Arabic are spoken, but most locals here also speak Spanish. I often felt confused about whether to address people in my rusty French, my very limited Spanish or if I should attempt the few Arabic words I had learned.

The town’s medina is mostly residential, which I think is partially responsible for how quiet and peaceful the atmosphere felt. There were shops here and there, but no one really pressured us to buy anything. It also helped that we visited during the low season – with beaches found nearby, Asilah, Morocco is supposedly extremely popular in the summer but in late November, when we were there, it was almost deserted.

Asilah is known as one of Morocco’s most artistic cities, mainly thanks to the Asilah Cultural Festival which takes place in July and August each year. We weren’t able to see the festival, of course, but the street art created during the public art demonstrations is left throughout the rest of the year, adding color to the white walls of the medina. We passed by the workshops of dozens of artists and craftspeople, and musicians played impromptu concerts in the streets.

Asilah, Morocco is a laid-back and playfully creative city and an awesome introduction to Moroccan culture.

Looking for a place to stay in Asilah, Morocco?

Residencia Turistica Garcia is a centrally located apartment rental that can be your home away from home in Asilah as you relax with sea views.

Dar Manara is a modern guesthouse with traditional Moroccan details.  Relax in Moroccan style on the terrace and take part in breakfast before exploring the town.

Azayla Hotel is located just steps from the water and this small five-room hotel is a quick walk to the highlights of Asilah. 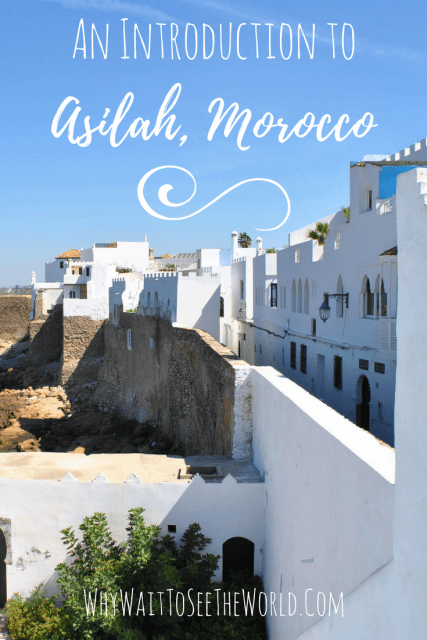 18 thoughts on “An Introduction to Asilah, Morocco”