Brent had visited Thailand before he and I came together, and had told me stories of Thai cuisine that were the stuff of food fantasies: Dishes filled with fresh herbs like lemon grass and mint; and ingredients that magically came together into perfect combinations of spicy, sweet, sour and salty. I was therefore completely crushed after we arrived in Thailand, and the first street stall we came across served nothing but khao man gai (boiled chicken served on plain white rice).

Although it’s often possible to get lucky by guessing and pointing at dishes in restaurants and at street stalls, I quickly learned that it’s also easily to miss out on some of the best Thai dishes if you don’t know what you’re ordering or what exactly you’re looking for. Even after living in Thailand on-and-off for a year, I still often find myself surprised and mystified by the diversity and complexity of Thai food. This is an overview of some of my favorite dishes, which will introduce some of the basics and hopefully give you a few ideas about what to order. 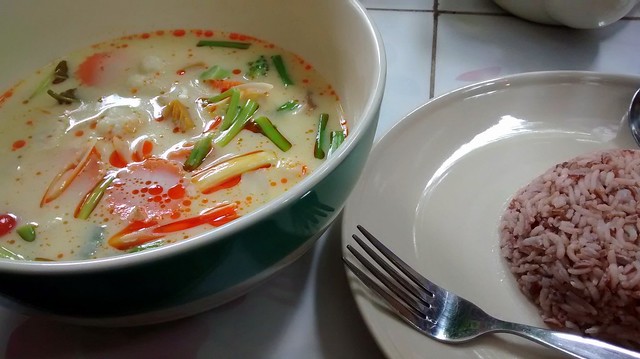 One of the more embarrassing lessons I learned early on about Thai soups is that they’re often flavored with ingredients like galangal (a ginger-like root) and lemongrass, which you’re not supposed to eat (except I totally did, and wondered why they tasted so horrible). You can spoon these ingredients out of the soup or just eat around them as you go.

One of the most common Thai soups is tom yum, which is made with lemongrass, galangal, fish sauce, kaffir lime leaves, and crushed chili peppers. Tom yum goong is a popular version of this soup that includes prawns (goong). If you like spicy dishes, tom yum is filling enough to be eaten as a meal, particularly if you have it with a side of rice. My preference, however, is to share it with a group, accompanied by some milder dishes to balance out its intense flavor. As a side note, one of the best parts of eating in Thailand is that when you dine out with a group of people, everyone shares all the dishes rather than ordering their own plate, which is fantastic because it means you get to try all kinds of different foods in a single meal.

If I want a soup as a stand-alone meal, I usually go for something sweet and milder like tom kha gai, which is made with chicken, coconut milk, lemongrass, and galangal. 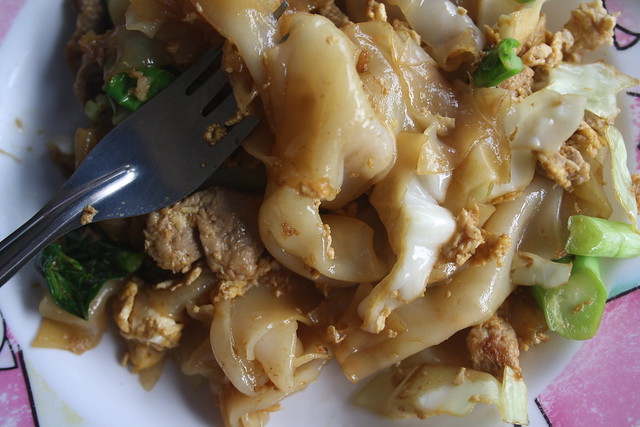 It’s kind of impossible to write about Thai noodles without mentioning pad thai. Although locals sometimes joke about Westerners’ obsession with this mix of stir-fried rice noodles, egg, tofu, bean sprouts and onion, I’ll be honest: I love it and I eat it all the time. Plus, like most Thai dishes, pad thai is a little different everywhere you order it, which I think is why it still manages to hold my interest. My other go-to noodle dish is pad see eiw: Wide rice noodles, chicken and Chinese broccoli, stir-fried in soy sauce. It scores big on comfort food points, plus if I’m ever limited to eating at a very basic street stall, I know they pretty much always have the ingredients for pad see eiw. 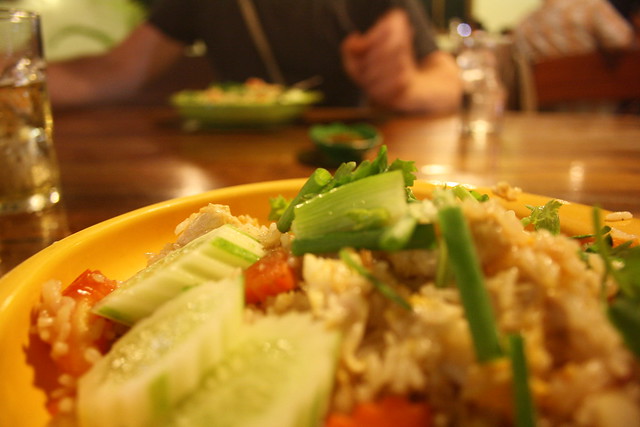 A lot Thai rice dishes I see at street stalls are just simply different kinds of meat served over plain rice. It’s therefore useful to know the most common meat words in Thai: gai is chicken, moo is pork, neua wua is beef, and plah is fish. If you’re a vegetarian, you can order a dish “mai sai neua” (without meat).

One of the cheapest dishes wherever you go is omelet rice, which is basically a fried egg served over rice. Thai omelets are really different from the French version: Instead of being light and fluffy, they’re golden-coloured and crispy on the outside, but soft on the inside. The dish can be a little bland on its own, but this is an example of when the use of Thailand’s ever-present condiments is the key to creating a satisfying meal. Whether you’re eating in a restaurant or a roadside stall, you’ll almost always have sliced chilies in vinegar, dried red chili, sugar, fish sauce and, sometimes, ground peanuts on your table. When I used to eat school lunches with my Thai colleagues, they would load their omelet rice up with all of the above. Omelet rice is good if you’re searching for non-spicy Thai dishes because you’re starting with something bland, and then you get to add the condiments yourself to control the level of spiciness. 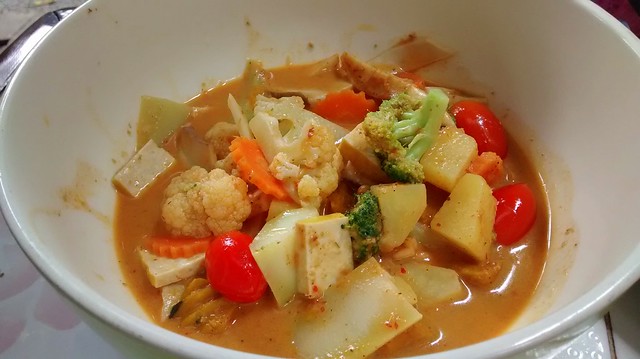 Thai curries are made with coconut milk, which is probably why they’re among my favorite dishes because I’m obsessed with all things coconut-based. Thai curries have a completely different taste compared to Indian curries, because they generally incorporate herbs, leaves and other fresh ingredients, rather than spices (and like with soups, they often include leaves and other bits that are added for flavoring, which you’re not meant to actually eat). By far my favorite Thai curry is massaman curry, which generally contains potatoes, roasted peanuts, bay leaves, cinnamon, sugar, tamarind sauce, and meat or tofu. I really like this curry because it’s a little sweeter and the coconut flavour is quite prominent, although I always ask for mine without peanuts or ‘mai sai tua’ since I’m allergic to them. 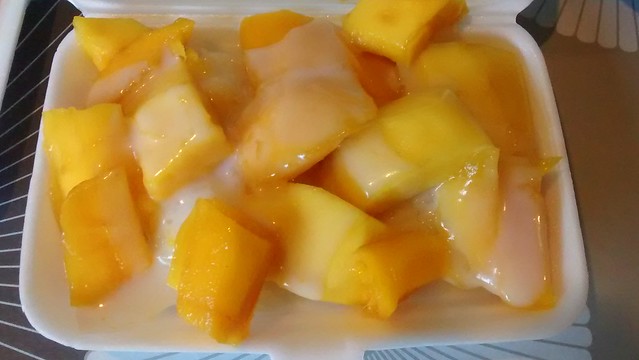 Easily one of the best things about eating in Thailand is the widely-available fresh fruit, which makes for an awesome, cheap dessert or snack. You’ll see street vendors everywhere selling little bags of juicy pineapple, bright rambutan, and sweet mini-bananas. Even better are all the desserts made with fresh fruit, my favorite of which is kao niew ma muang: Fresh slices of mango served over sticky rice and topped with coconut cream syrup (did I mention I love coconuts?). You’ll find it everywhere, from tiny street stalls to restaurants, and it’s almost universally amazing.

20 thoughts on “A Beginner’s Guide to Thai Food”