The Taiwan Night Market scene is a huge part of the local culture and one of the more beloved aspects for travelers visiting the country.  If you tend to err on the side of adventure with your culinary travels, here are three of the more unique, and perhaps bizarre, foods to check out at the Taipei Night Markets.

And note, stinky tofu is not on this list because it’s so mainstream in the country that it’s often declared the national dish of Taiwan!

After nearly 2 ½ years of working up the nerve, I finally tried a duck tongue! Perhaps I may have cheated by going for the deep fried version over the more au naturel one, but hey, a duck tongue is a duck tongue, right?

Surprisingly, it wasn’t bad, but the texture was pretty much like eating a thick cut potato chip with shards of glass.  The tongue is filled with hard fibrous pieces that can stab you in the roof of your mouth if you aren’t careful.  And if your idea is to take it all as one big bite, you may be in for a world of hurt!

Like most Taipei night market foods, duck tongue comes on a stick – typically three to an order – so bring a friend or two if you don’t want to try more than one.

Oh yes….the butthole of a chicken. This one I actually tried by accident and it ended up being one of my more favorite bizarre Taipei night market snacks.  The first time I tried it, my friends were visiting from the US and wanted to play Andrew Zimmern.

The first night market stands we hit had a dizzying array of unidentifiable animal parts on a stick.  Turns out the woman running it spoke a little English and she pointed to a rather innocuous looking stick and then pointed to her buttocks, and said: “chicken butt, you want to try?”

We all thought, “Hmmm, the butt of a chicken? This is easy!”  We split a stick and it was quite tasty – we just figured it was meaty part of a chicken’s tush.

It wasn’t until later that night at a different night market when several local girls were identifying various meats on a stick for us and they got to the chicken butt and when we proudly exclaimed we tried it already, their shocked faces and giggles made me quickly realize that was not your average chicken butt.

Through a few more giggles, and the helpful gesture of a hole with a finger through it, did we finally realize what we had eaten.

Sometimes ignorance is bliss perhaps, although I have to be honest now, chickens have some rather tasty buttocks!  So if you are feeling adventurous at the Taipei night markets, there is always chicken anus.

Those keeping Kosher or eating Halal may want to avert their eyes for this one.  Taiwanese Night Markets are known for a pretty interesting staple – pig’s blood cake.

Unlike things that have misleading names and may not be as bad as they sound, no, this is literal.  These yummies are just glutinous rice and congealed pig’s blood cut into nice squares and skewered for your night market munching convenience.

The use of blood is not all that uncommon in many other cultures either. Blood pudding and blood sausages are two common ways animal blood is incorporated into cuisine.  However, there is just something that often catches people off guard about eating a stick of pig’s blood held together by sticky rice.  You can even go gourmet and find versions that include peanut shavings, cilantro, and hot sauce drizzled on it.

And all pig’s blood cake is not alike – find a vendor that specializes in it rather than trying one from a stall that sells other organs and skewered meats – huge difference!

This is obviously only an intro to some of the bizarre eats you can find at Taipei Night Markets.  While these may border on the “gross” for some, rest assured night markets in Taiwan are filled with countless “normal” and less obscure eats for those who don’t define culinary adventure as chomping on a chicken’s bunghole. 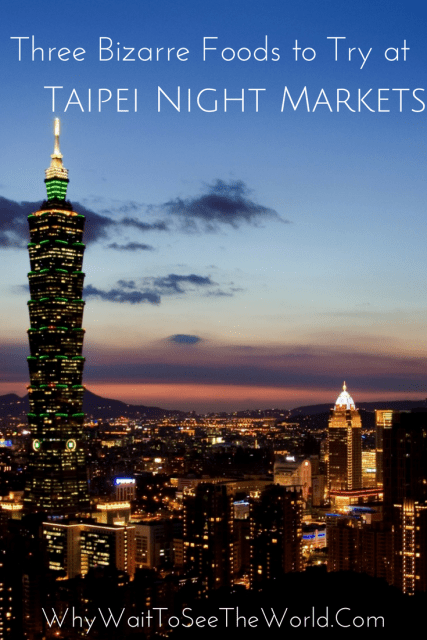