This is part two from Burmese Piracy: Rangoon to Pathein

We arrived late to Mandalay, after a week in the Northeast highlands near Lashio. You weren’t exactly the only foreigner up there – but you weren’t far off. This meant those that you did encounter became instant mates, not the least because they typically exhibited the character of the hardcore traveler. Trading tales on that lumpy train ride allowed the hours to slip by, although we made a point of paying attention while crossing Gokteik Gorge, formerly the world’s tallest trestle. 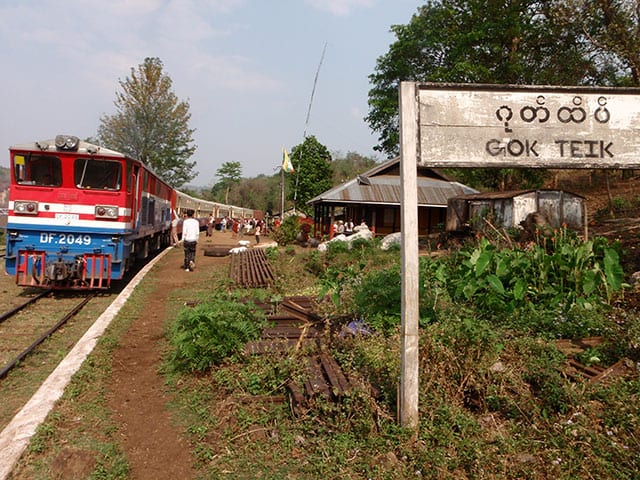 Along with Ed, a Frenchman following the same route, I alighted at Pyim U Lwim. The train did proceed directly to Mandalay, but if we were to make our vessel the next day, we needed to hit the gas pedal, so we found ourselves a precarious perch on the back of a pickup on the outskirts of town.

The run down the mountain slopes to the flatlands of Mandalay I won’t soon forget. High lightning began to flash while we were still an hour out, which quickly deteriorated in to a full-on thunder squall, complete with blasting winds, falling trees, and driving rain. By the time we arrived in the city, my pack – balanced on the roof – was a sodden mess. The rain was still falling in sheets in the deserted streets of Mandalay when we jumped out, around one in the morning. Our kindly compatriots from the ride made sure we had our bearings, and we shook hands with them all before leaving. Then Ed and I squished through the empty streets to a hostel and put our heads down. Four hours later, we were sitting in the back of another pickup, splashing half-consciously through the morning darkness to the riverside.

A disused barge sat adjacent to the river, grounded in the mud. It was our gateway, our ticket booth, wasting no real estate on dry land. Our foreigner status gained us the usual inspection of passports, we passed the chap 30000kyat, and hopped aboard.

This vessel was different. While the delta ferry was obliged to cope with the open ocean, this one was pure riverboat; it was wide and shallow-bottomed, the type that needs little more than a paddlewheel to resemble a CCR track. The date on the engine room bulkhead read 1948, a British build. As the sunrise began to illuminate Mandalay’s riverside, the diesel growled to life, and we pushed off in to the mid-channel current. 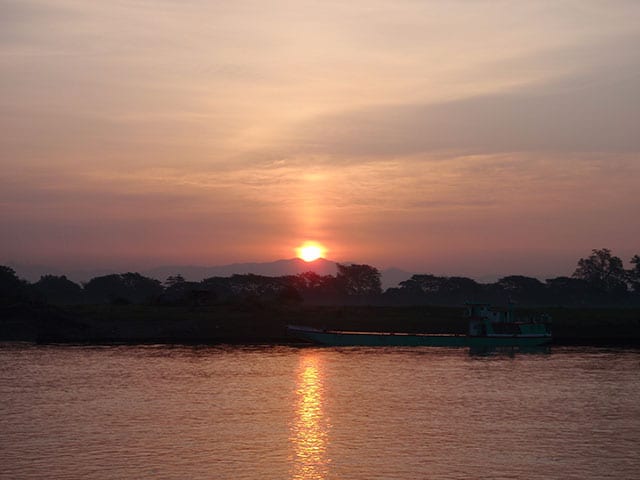 Our hiked price (roughly $15) didn’t give us the same degree of privacy and comfort as the delta ferry; this one lacked any form of privacy at all, in fact. It’s double-decked layout was completely open. And it was packed – one of the reasons we had to rush it down from the highlands was it sails only once weekly. This was the only game in town. But they laid out plastic chairs for us on the upper deck. Families sat crossed legged and laid out spreads of breakfast, while a few army blokes lounged in slung hammocks. It was packed, but peaceable, and as the morning and the heat made up, a breeze came along to keep us happy. 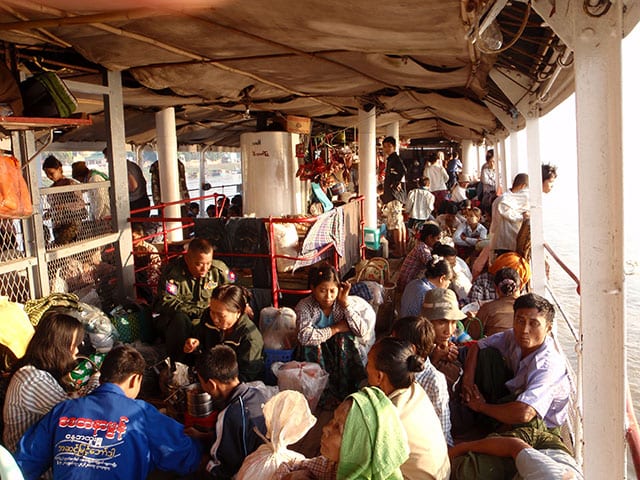 After three hours, the ferry described a large U-shape, and nestled up against the bank, there to offload some people and produce at one of the riverside settlements. What appeared to be most of the village turned out on to the bank for the occasion: the women in their colourful dresses and sun hats, the deeply-tanned men in rough khaki pants.

Around noonday, starting to feel the after effects of my insufficient sleep, we alighted on the west bank, opposite a small settlement, for another offload. We then proceeded to get undeniably stuck in the mud. Despite ‘working’ the boat back and forth using the engines, we stayed stubbornly entrenched. There was only one option: we had to lighten the ship.

So the gangplank went back out, and the lower decks, knowing the score, jumped on to the bank. I quickly gave my camera to an Australian seatmate, and grabbed Ed.

“Once in a lifetime, mon frere..besides, you alone will probably make a real difference.” 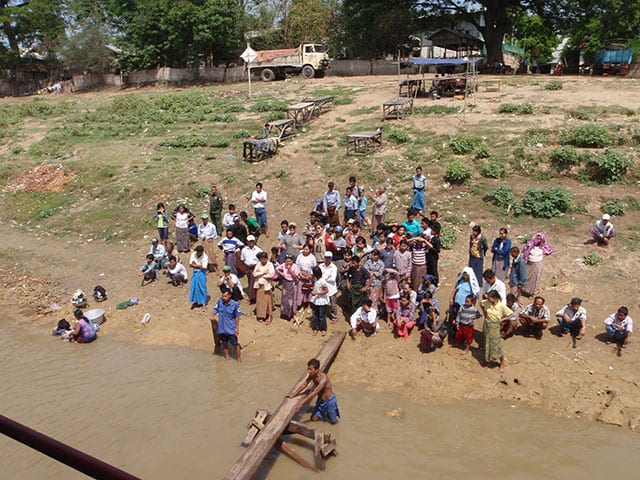 It took some effort, both from us, some chaps with long pushpoles, and the vessel itself, but eventually we were freed. Buoyancy restored, we hopped back on board, and headed south.

The floodplain grew wider as we pushed south throughout the day, pushing the settlements further and further afield so as to avoid monsoonal flooding. We were properly detached from modernity now; the goods from the vessel were offloaded by hand in to beast-drawn carts, from which they shuffled off in the direction of some diffused smoke drifting up from inland. Electricity, and even proper roads, were non-entities. 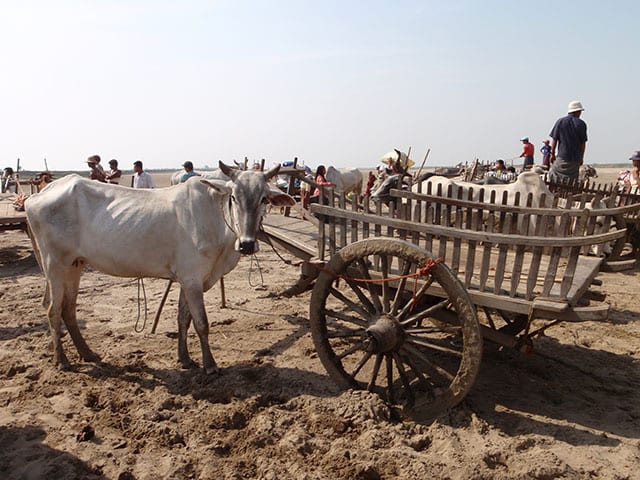 Our last stop took a solid hour. Most of the hardware on the lower decks had to be offloaded here. I took the opportunity to hop in to the murky water of the river for a dip – upstream of the boat, and it’s hole-in-the-floor facilities.

Images of colossal catfish filled my imagination while wading in the murky, silty rivers. They are truly opportunistic predators – one Nepalese river, where tradition has locals float their dead relatives down the river, has led to the fish developing a taste for human flesh. Several people go missing each year. The Irrawaddy has it’s own brand of giant cat – most tropical rivers do – similar in stature to the enormous Mekong cat, but considerably more numerous, a result of Burma’s thin population and less intensive fishery. In Laos, you couldn’t roll past an eddy without seeing a phalanx of plastic bottles marking baited trotlines. Luckily for the giant catfish here, he didn’t try and mess with me. 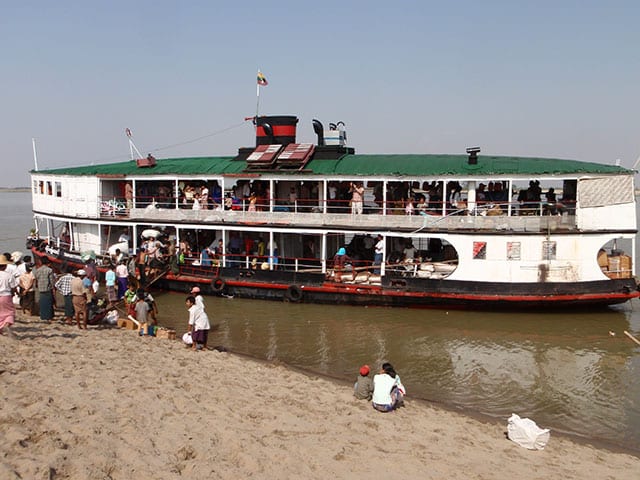 The Irrawaddy’s wide course decreases the number of pinch points where fisherman can intercept these big migratory cats, making this one of their last strongholds in Southeast Asia. Outside of the Congo, Amazon, and Orinoco basin, you are hard-pressed to find them anywhere. Even rivers as large as the Mississippi were fished out by the turn of the last century. Little wonder: long-lived and massive, they can feed an entire village for a week.

Early April was low season, and the Irrawaddy was running low. The flat basin of the riverbed widened out as we approached Bagan, the sun setting in the west. A crew man on the bow continuously sounded the river with a bamboo pole to ensure we had adequate water, while the mate up in the pilothouse used the searchlight to attempt to locate shifting sand banks in the murky waters. Several times, you could feel a gentle shudder as the ferry ploughed through one. Eventually, the captain pulled us to the side of the river and docked us against a barge. There were no lights about, no sign of civilization. We weren’t in Bagan yet. The first mate addressed us:

I asked him how much further to go.

This late in the going, the guest roster was entirely foreign, maybe a dozen of us. I was pretty contented; we had plenty of mosquito repellent, the tiny kitchen near the stern had just fed me a decent curry with rice, and I was lounging by the rail with Ed and Will, a Brit, smoking and bantering. Other passengers, however, were going somewhat more ballistic.

The captain came out to speak to us, but his reasoning was complimented by the good-natured smirk that usually indicates a bribe is being sought. I wasn’t overly concerned. Even the pilot house didn’t have screens on the windows, so if he wanted to leave us stranded here overnight, he would suffer right along side. I don’t always have the patience for it, but the old ‘go along with the new plan’ response works very well in these situations. Particularly if you get excited about it.

“Cool! We’ll drink the bar dry! I have some scotch in my pack somewhere.”

Ed picked it up quickly. “Bien sur! I bet we can scrounge some cheroots…maybe have a shoreside camp fire?”

I was never clear if anyone ever actually paid him, but after some negotiating, he relented. We pushed back off in to the darkness, and eased our way the last ten miles to the grassy shoreline of Old Bagan. Having been awake for around twenty hours, in the wake of the previous lengthy travel day, Ed and I took a horse cart the last mile to Pyinsa Rupa Guesthouse, almost oblivious to the landscape of the town around us, and slept very, very well.