The biggest groups of tourists in China are definitely not Americans, Brits or even Australians. It’s other Chinese people. Which makes sense when you think about it- there are literally a BILLION of them and they aren’t really allowed to leave the country much. So they travel domestically, sometimes drawn to things like the Forbidden City, and sometimes to things that are a little more… hokey. 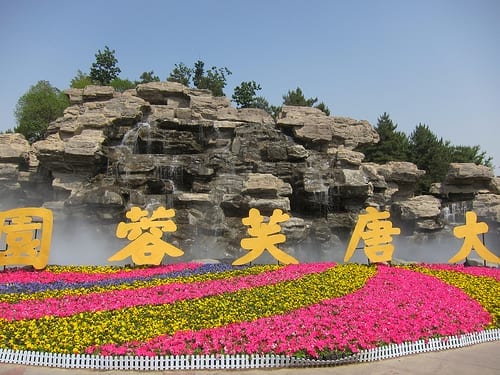 Last week Mike and I visited one of these uniquely Chinese tourist attractions. Tang Paradise, is a recreation of a Tang Dynasty pleasure garden, except that instead of being built in 483 AD it was constructed a couple of years ago. And it looks like it- the entire place is shiny and new. It’s billed as an amusement park but you won’t find any roller coasters or bumper cars- instead there are 165 acres of parks, lakes, fountains and well, nature stuff.

It WAS a pretty park, and I decided to make the most of the day, and our exorbitant 90 RMB entrance fee by trying my best to be a Chinese tourist for the afternoon.

So here are my tips for being a Chinese tourist:

Get Ready to Pose

Chinese people, particularly teenage and twenty-something girls, LOVE posing for pictures. They will spend half an hour striking the perfect pose in the most scenic spot of any attraction, other tourists be damned. Even better are statues that can be used as props. I saw about a dozen teenagers posing with these enormous hand statues, so I had to try myself: 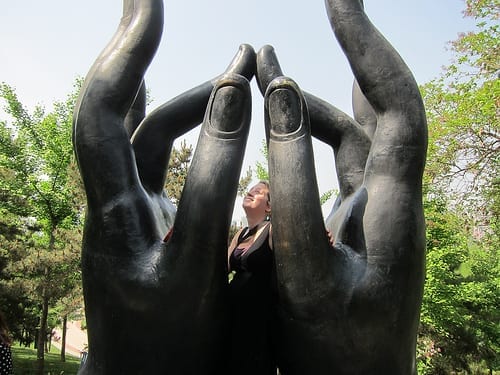 Got Mike in on the act too: 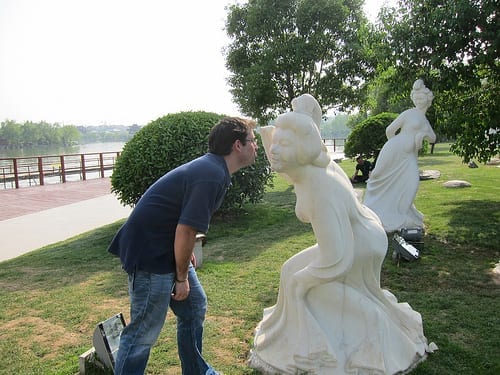 I’ve seen these stands in front of all the major tourist attractions in China. They rent out traditional clothes and headdresses for a photo op. While getting one of those lame “old saloon” recreation pictures back in the states will set you back a good $75, the place by the Lake at Tang Paradise was charging 20 RMB (less than $3). Since I was playing Chinese tourist I decided I better give it a shot: 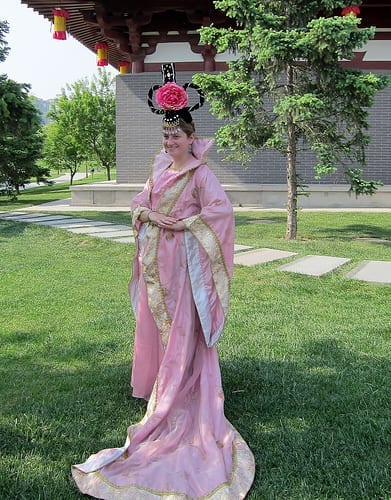 The clothes were really hot and itchy, and the headdress is obviously made for someone with dark hair, but not bad right? They made me make some really weird poses that the Chinese can obviously pull of with more grace than me, but it was still pretty fun.

Carnival games were spread out all around Tang paradise. These games are high stakes: in China you don’t play to win some stupid stuffed animal- you play for ACTUAL animals: 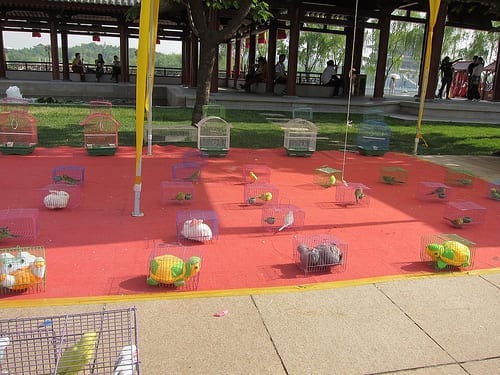 Yes those are parrakeets, and rabbits. I felt really sorry for the rabbits crammed in those tiny cages so Mike and I wasted 10 RMB trying to win one. We didn’t, I’m pretty sure it was rigged. It’s just as well, I don’t know what we would have done with the little guy!

Seriously, you can act as Chinese as you want, you can even speak Chinese, but if you are Caucasian (or really anything besides East Asian) you are going to stick out like a zebra at a racetrack. 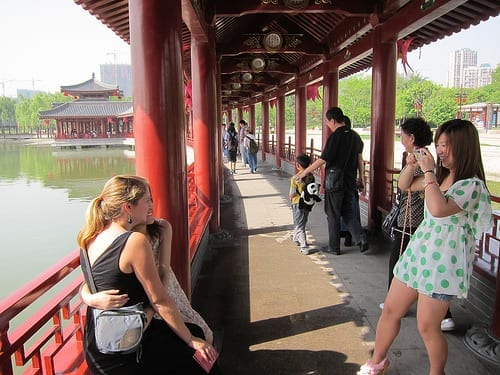 This unbridgeable divide gets wider at areas popular with Chinese tourists. People stare, sometimes they point. You become more interesting than the actual tourist attraction. I spent a large part of the day posing for photos with everyone from old women to kids. One woman even plopped her baby into my lap (“please don’t poop” I whispered into his ear)!

So I’ll never be a Chinese tourist. Still it was fun to pretend- if only for the day!

24 thoughts on “My Day as a Chinese Tourist”