Hello there! Remember me? The girl who wrote this blog for six years then had a baby and dropped off the face of the earth?

Well I’m back and everything is the same but also totally, unexpectedly, different. Let me tell you all about it.

First off let me count my blessings. I’m so lucky that we were in a place financially where I could basically take 20 weeks of unpaid leave to hang out with the best baby in the world. I’m so lucky that more than twenty of my most awesome blogger friends stepped up and contributed guest posts on all sorts of subjects so my blog wasn’t a desolate wasteland during that time. I hope you enjoyed hearing some new perspectives while I was gone. I’m also super lucky that Megan was around to keep things up and running smoothly while I spent entire days trying to convince Marcella that naps were maybe a good thing, please, oh god, just go to sleeeeep.

And now I feel super lucky to be back, with a million things to do, an overflowing inbox to tackle and distractingly cute four month old baby begging for attention. I’m also lucky that Mike starts two months of paternity leave today so he is hanging with Marcella while I start to put the pieces of my work life back together.

Since I’ve been MIA lately, let’s reconnect shall we? I’ll start by tackling the 4 questions I’ve been answering over and over to almost everyone for the past month or so.

How Are You Liking Motherhood? 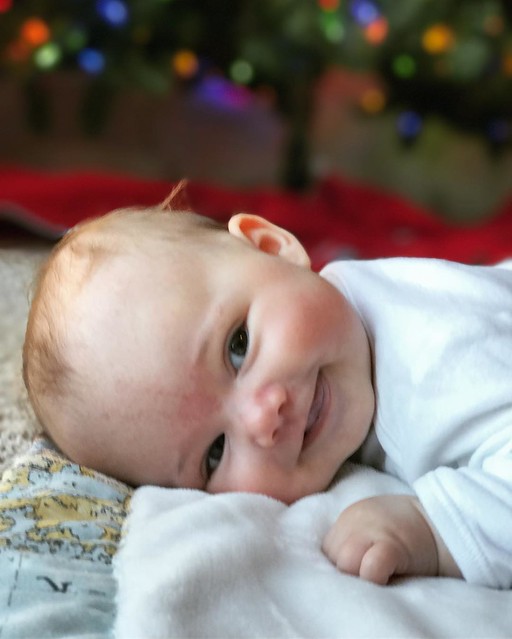 Let’s get the pleasantries out of the way first, right?

Well for starters I LOVE my baby. She doesn’t like to sleep much and I’ve never been so tired in my life, but I can’t even be mad at her for that. She is so adorable, funny, fun to hang out with, and it’s so interesting to watch her grow and learn about the world. I can literally just stare at her face for hours.There is so much I’m looking forward to doing with her, so much I want to teach her. Along with Mike she is absolutely the love of my life.

But, if I’m being brutally honest I would say the whole motherhood thing is pretty tough. It is all-encompassing: babies demand every ounce of your attention, your emotions, your physical energy, just everything you’ve got. It’s exhausting on multiple levels, and after a little while you can start to feel a bit lost. Some women are cut out to be stay-at-home moms and I am simply not one of them.

Which is why it feels GREAT to be back at work, sitting in a coffee shop, thinking about non-baby things (and drinking a massive amount of tea because I only slept like 90 minutes last night).

Except dammit… I already miss her chubby little face.

What are You Working On? 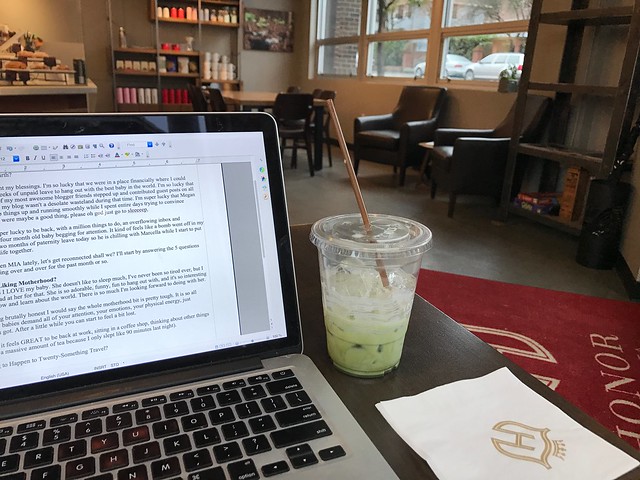 This blog post is literally the first thing of substance I’ve written since July. It just hasn’t been a priority. I sat down to write up Marcella’s birth story (would anyone actually be interested in reading that or would it be total TMI?) but I never even finished that because the baby started crying or trying to smother herself in the couch or something. Those first couple months I could barely sit still long enough to put together an email.

Not writing for four months was strange on many levels. At first I didn’t miss it at all, but by November I was dying to get some words out. I think it’s actually been an important break for me, a chance to reassess why I write and what I want to write and a time to incubate some new ideas. Now, with limited time, it’s more important than ever for me to work smarter, not harder.

Basically, I’m starting from zero. I quit most of my writing gigs, the ones that felt like mind-numbing chores, the ones that I procrastinated on for hours and hours because just staring into space felt more entertaining then writing another 500 word piece on The Best Hotels in Philadelphia. I’m not doing any more unpaid stuff (so don’t ask), or projects that are more about SEO than quality writing. No more busy work.

I’ve got a blank slate right now and I’m going to start slowly adding in the things I actually want to do. I have a lot of ideas- including one really big one that I’m still incubating and will hopefully be able to share in a few months. I am taking myself seriously now- I got into this business for real reasons and I need to be proactive about those goals.

Vague? Maybe. It’s a little bit vague on my end still too. Hopefully it will all come into focus soon.

Ah yes, that’s the question I’ve been wrestling with for literally years now. My first child that has grown far too big for it’s current situation. I’ve been avoiding making any big decisions about what to do with this space because the idea of change is scary and also a lot of work. Guess it’s time to man up and deal with this.

Twenty-Something Travel will be undergoing a rebranding in early 2017. I’m still working out some of the details but the general content and basic message will remain the same: don’t wait to see the world.I’m not trying to write a Mommy Blog, but I’m sure there will be a family travel element from here on out. The name has got to go for starters. A thirty-something mom can not legitimately write a blog called Twenty-Something Travel. I need to be able to sleep at night! Haha just kidding, I don’t sleep at night anymore.

So consider this a big “Pardon our Dust” sign. Changes coming soon.

Where are you Going Next?

Right now I’m just happy to be out of my apartment and at a coffee shop!

After far too long hibernating at home, travel is coming back in the picture, slowly but surely. Marcella had her first flight at two months old, we flew cross-country to meet Mike’s relatives in Pennsylvania and New Jersey. She saw the Atlantic Ocean (although weirdly hasn’t seen the Pacific yet). We took our first family trip (Leo too!) in November, to Portland, where we walked until our feet hurt and drank a lot of beer. Next week we will be taking Marcella on her second cross-country flight to visit the grandparents on the East Coast for Christmas.

Traveling with a baby is like learning to travel all over again. There is a lot of logistics to figure out, and scheduling to consider. I expect it will get easier though and soon we will be squiring our baby all over the world like my friends Chris and Tawny are managing to do with Marcella’s friend Holden. We have at least one international trip planned for 2017 and hopefully a few domestic ones. Maybe more if we’re lucky. You know we can’t sit still for long…

So there you go, 4 questions and not a single satisfying answer to any of them.

As much as you can prepare for having a baby (and we really did everything we could think of to prepare), it’s impossible to know what the reality will feel like until it happens.

It kind of feels like a bomb went off in my life, and now I’m trying to put together the pieces. Except I don’t want to put them back the way they were, I want to build something new and inclusive and better.

It feels ambitious as hell, but hey, I’ve only been back at work 90 minutes and I already wrote this overly-long mission statement/screed. I needed that break like I didn’t even know: I’m feeling more enthusiastic about work than I have in maybe years, and I’m excited to see where this will go.

Until then, send me some good sleep juju? I’m really, really tired.