I promised more Seattle stories on Monday and I am doing my best to deliver!

Going up in a seaplane has been on my Seatle bucket list since the day I arrived. I’ve seen them buzzing around the city and gliding across Lake Union while I went about my humdrum, non-aerial business. So when Viator offered me the chance to explore Seattle with one of their tours I jumped at the chance to finally realize my seaplane dreams. 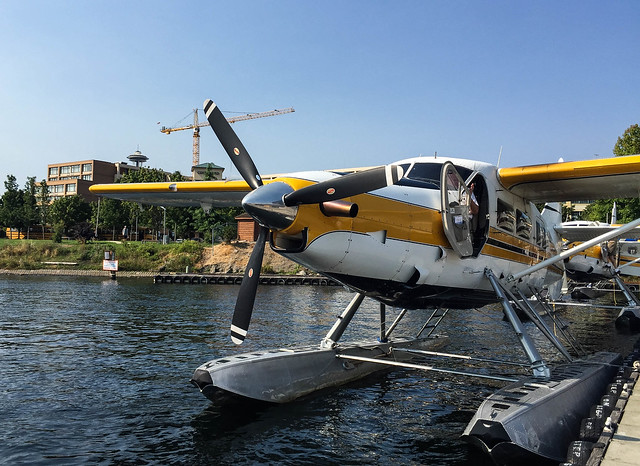 I took their Best Seattle Seaplane Flight from Lake Union tour, which hooked me up with a local seaplane company that offers short scenic flights around the city in addition to their usual commuter flights. Lake Union is right smack in the center of Seattle, so getting there is super easy.

My first attempt to fly was cancelled due to thick fog and rain (probably a good thing. Fog doesn’t make for great pictures). I rescheduled for a few days later, on what turned out to be a sunny, if slightly hazy day (thanks wildfires).

The flight, while only 20 minutes long, was incredible. Although I like to think I know Central Seattle pretty well by now, viewing the city from above gives you a new kind of context. The plan goes high enough to give you a birds eye view but not as high as a commercial airliner, meaning you can see everything in high detail. 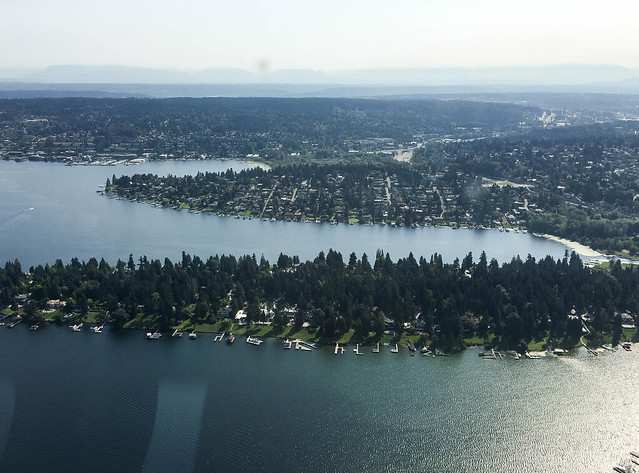 The biggest takeaway: Seattle is one wet city. From central Lake Union to the enormous Lake Washington to the East and Elliot Bay to the West, the city is surrounded on almost all sides by sparkling water. Across the bay you can see the tip of West Seattle (home to Eddie Vedder and the NVR Guys), and Bainbridge Island.

The plane seated roughly 8 people total, and everyone gets a window seat, along with a set of thick headphones which pipe inspirational music and a pre-recorded narration. I spent most of my ride simultaneously glued to my left side window and worrying that I was missing the views from the right side windows.

Both views were good: the left side got better views of the bay and lake, while the right side got a better shot at downtown. It all evened out though with the grand finale when we zoomed past the Space Needle and Seattle Center. 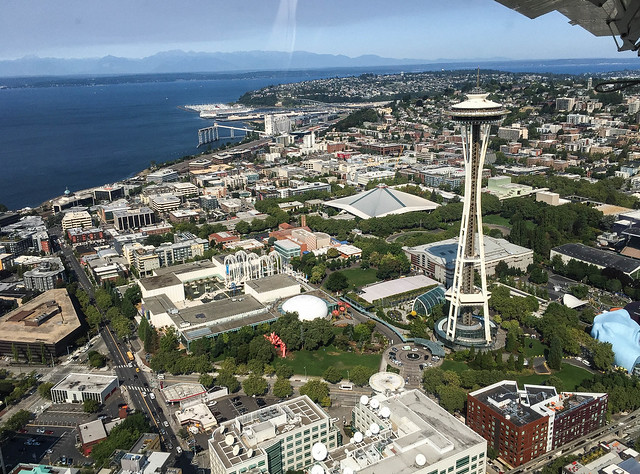 I look at the Space Needle every single day- I see it from all over town, but this was undoubtably the best view of the space needle I’ve ever had.

Our plane touched down back on Lake Union all too soon, speeding past a battalion of kayakers. I walked away with a ton of pictures and a whole new perspective on my new city.

Disclosure: My tour was provided compliments of Viator. All opinions are my own.

4 thoughts on “Exploring Seattle via Seaplane with Viator”