I wasn’t going to write this article because once I get started it’s hard for me to stop, and suddenly I have pages and pages of an angry feminist travel manifesto. Which is not what I’m trying to do today, so I will restrain myself and just offer some opinions on what’s going on in the world today.

Lots of people are talking about the 33-year-old American woman, Sarai Sierra, who was found murdered in Istanbul last week. It’s a very sad situation that’s currently being investigated by both the local authorities and the FBI. At this point, it’s impossible to know what happened and why.

[UPDATE: Sierra was killed by a homeless man who attempted to sexually assault her. Her death was 100% not her fault and something that unfortunately happens on streets everywhere in the world]

Perhaps because there are so few details, the media has zeroed in on the idea of a pretty woman traveling in a foreign country alone. So you see articles telling us women’s solo travel is under scrutiny that contain quotes like “A woman has no business traveling alone,” and “No way I would even let my beautiful wife out the door to travel to any country alone.”

Pause a moment while I try not to rage smash my computer.

I find this infuriating not just because there are human beings who actually think that way in 2013 (I mean, thank god I’m not that guy’s wife- am I right ladies?), but because it’s all totally misdirected. There are a lot of problems evident here, but ladies wandering around unsupervised isn’t one of them.  I will say it again: Female Solo Travel is NOT the Problem.

Xenophobia is the Problem

I get asked about safety for women travelers a lot, and it’s not surprising. Movies like Taken (if you don’t know why Taken is an absolutely ridiculous, impossible scenario, I don’t even have time to start to explain it to you), and the news media do a pretty good job of convincing us the world is a really scary place, particularly for women.

The thing is: the world isn’t a scary place. Time and time again, in places like Colombia, China, and Bosnia, I’ve found that the hype about traveling abroad is far scarier than the act of actually doing it. If you have a good head on your shoulders, the world is a pretty safe place. There is nothing inherently dangerous about being outside the United States- something we often seem to forget. Because uh… women are raped and murdered here too- a LOT of them. Washington DC has a higher murder rate than Bogota, but nobody seems worried about me wandering around by myself here.

If this poor woman had been murdered in Chicago or New York City we probably would never have heard about it, because it doesn’t play on this fear of the unknown.

Female Solo Travel is NOT the Problem: Double Standards Are the Problem

So why is nobody cautioning men on the dangers of traveling abroad, or alone? Why was that article above questioning female solo travel and not just solo travel in general?

Not that I’m not saying solo travel is unsafe- I think it can be perfectly safe as long as you are aware and don’t act dumb. And I don’t think the experiences of traveling alone for men and women are identical. I just think it’s incredibly unfair that only women get questioned for doing it.

Violence Against Women is the Problem

But the worst part of all, this debate about solo travel is a distraction from the real issue: a woman was murdered. Why was she murdered? Not just her, what about the four other Turkish women who were killed that same weekend?

When terrible things happen to seemingly innocent people, our minds do a funny thing. We don’t want to believe these things can happen to us, so we immediately try to figure out what that person did wrong. Were they walking alone late at night? Dressed provocatively? Traveling alone in a foreign country? Anything to convince ourselves that this horrid thing was their fault, and couldn’t happen to us.

Sierra may have been a woman traveling alone. But travel isn’t what killed her: a person did it. In the case of the other four women who were murdered: their husbands and boyfriends did it.

So I take it back, sometimes the world IS a scary place. We do have a problem, but it has nothing whatsoever to do with travel. Once again, female solo travel is NOT the problem.

What do you think? 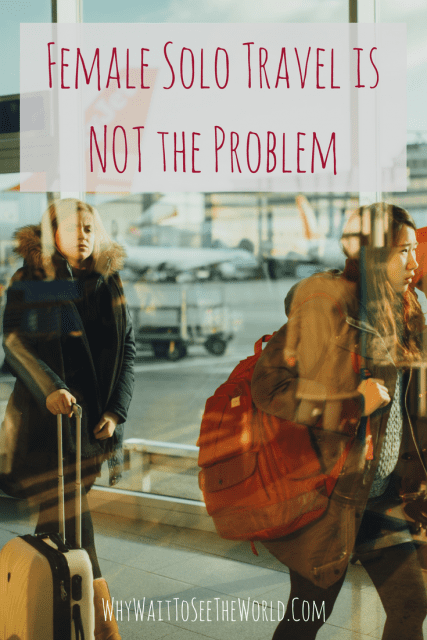 149 thoughts on “Female Solo Travel is NOT the Problem”