People think it’s strange, but I totally geek out for cemeteries. There’s nothing creepy about it; for me they are quiet reserves of history, culture, and yes, beauty. I’ve written on here several times before about Highgate Cemetery in London but had never gotten a chance to visit myself until this past November.

Highgate is the crown jewel in a city filled with cemeteries. It is both a working burial ground and a museum of Victorian beliefs, technology and architecture.  Opened in 1839 to accommodate a recent population explosion in London, it was once the height sophistication to be buried there. Wealthy families competed for the most impressive monuments and mausoleums. In the early twentieth century the cemetery fell victim to disrepair and vandalism that it is only just now recovering from. The original cemetery, now known as the West Cemetery is an elegant and elaborate maze, which is only accessible by, guided tour. We took the last tour of the day and an early dusk gave the heavily wooded cemetery a dark and ominous effect.  Over the course of a freezing two hours we were able to see the most famous graves, the catacombs and the gigantic Cedar of Lebanon, a three hundred plus year old tree that looms over the entire cemetery. There was of course also the famous Egyptian Avenue, an architectural marvel built to boost the prestige of the cemetery. And slews of expensive and elaborate graves. My favorite was the life size lion snoozing on top of the grave of menagiarist George Wombwell. At the height of its popularity, the owners of the cemetery began to run out of room. The solution was to purchase another tract of land across the road, which became the East Cemetery. The new addition presented some serious logistical/theological problems. A dead body that has been consecrated must not leave holy cemetery land. The chapel was separated from the East Cemetery by a busy road. The clever Victorians solved the problem by digging and consecrating a tunnel underneath Swain’s lane. Bodies could now pass from one cemetery to the other with the use of steam powered lifts. The Victorians even tossed in a little symbology, claiming the process was an allusion to the resurrection.

The East cemetery is not as ritzy as the West, but it is home to many notables including Karl Marx, George Eliot and Douglas Adams (I was most excited for Mr. Adams).  You pay a small admission fee and then you can walk about freely. It’s much sunnier, open and less gothic then the West tract. There are many modern tombstones with an artistic flair, as well as more traditional fare. Off the main path tree roots and mud are quietly reclaiming many stones. The cemetery keepers practice “managed neglect” here. They can’t afford to keep everything trimmed and neat but try to cut back the worst of the overgrowth and prevent litter and desecration. The effect is really very beautiful. 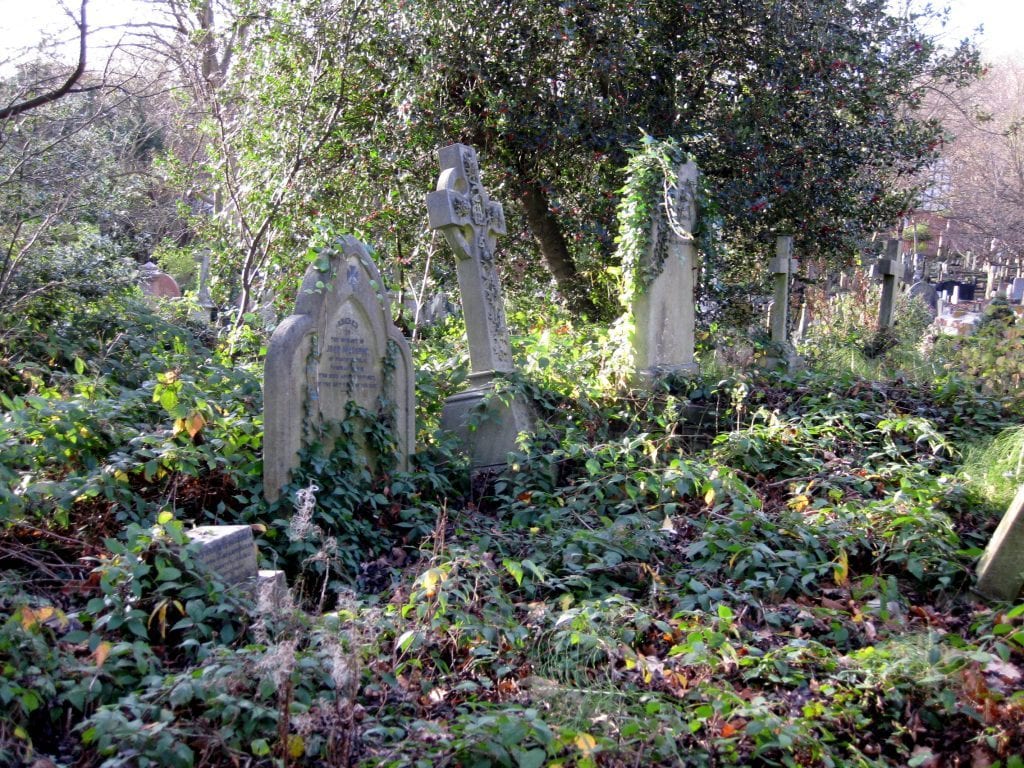 I went away with a better understanding of the Victorians and of London itself. If you can’t make it out to visit Highgate is featured in a number of novels. I suggest reading Her Fearful Symmetry by Audrey Niffenegger. She is a brilliant writer and her novel, set in and around Highgate, truly evokes the mystery and beauty surrounding this iconic cemetery.

17 thoughts on “Finding the Victorians at Highgate Cemetery”