If you’re like me before I visited Japan, Tokyo was pretty much the only city I’d actually heard of. So, if you’re curious what Japan has to offer beyond Harajuku and unusual vending machines (although these are both pretty awesome too), then this post is for you. This Japan itinerary is for two weeks since that seems to be roughly the amount of time most tourists spend in Japan, plus this gives you a rough idea of how much time to devote to each city. This route starts towards the south, and gradually takes you north, so you can arrive at the airport in Osaka (Kansai airport) and fly out of Tokyo (Haneda or Narita airports) with no backtracking. 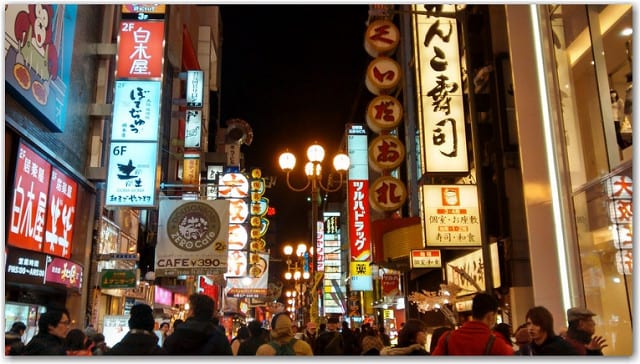 I wouldn’t consider any of Osaka’s attractions to be “must-sees”, yet this city is more than the sum of its parts. Osaka is one of my favourite cities in Japan to just be in. It’s big, busy, friendly, and yet still charmingly unassuming about everything it has to offer.

Osaka is well-known within Japan for its unique and fantastic food. Particularly around Dotonbori, one of the city’s main downtown areas, you’ll see dozens of vendors using thin sticks to flip balls of dough on spherical-mold skillets. They’re preparing one of Osaka’s most famous dishes: Takoyaki. When I think of Osaka, I think of happily burning my mouth on the gooey, hot center of these pancake-like balls filled with octopus, while standing in the middle of the crowds rushing down the streets of Dotonbori.

If there’s one particular attraction in Osaka I recommend checking out, it’s the Osaka Aquarium. I wouldn’t say aquariums are usually my thing, but I was completely mesmerized by this place. The tour starts on the 8th floor and you circle downwards, looping around the same massive tank which is always found in the center. Along with seeing other tanks on each level, this means you get to see the same animals in the main tank from different perspectives, and the effect is really cool.

The Cross Hotel Osaka is a perfect place to base yourself to explore Osaka’s tourist sites and to shop ’til you drop. 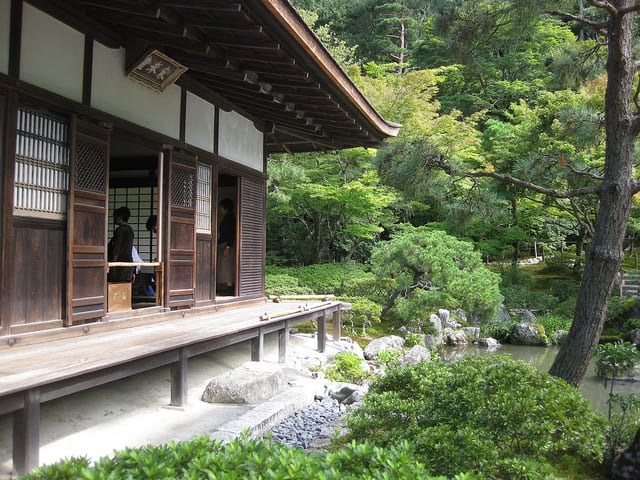 Home to literally thousands of temples and shrines, Kyoto is where most tourists go to experience old-world Japan. As Japan’s capital for more than 1,000 years, Kyoto is the birthplace of much of Japan’s traditional art, culture, and food. It’s definitely not some quaint small town, but the pace of life is gentler here compared to forward-thinking, modern cities like Osaka and Tokyo.

My biggest tip for Kyoto is to pace yourself with the temples and shrines. I’ve met people who hated Kyoto, and it’s generally because they burned themselves out by trying to cram ten different temple visits into a single day. My strategy was to choose one or two temples or shrines each day that I wanted to see and explore them slowly. Some of my favourites were Fushimi Inari Taisha, known for its thousands of bright orange-red torii gates, which you’ve probably seen photos of at some point; and Kinkaku-ji  Temple with its stark golden building looming over a pretty lake.

If you’re looking for elegant accommodations in an incredible location, give the Hotel Gracery Kyoto Sanjo a stay. Rooms are comfortable and feature everything you need for a comfortable stay. 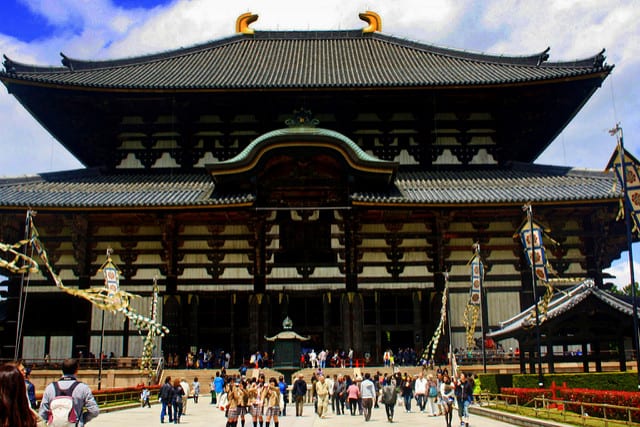 Kyoto’s temples and shrines are relatively spread out across the city, which means you end up spending a lot of time riding buses from one attraction to another. That’s why Nara is perfect side-trip from Kyoto, because its temples are all concentrated in one area: Nara Park. Nara is only a 30-minute train ride from Kyoto, so you can even keep your guesthouse for the night in Kyoto and just visit Nara for the day.

Wild deer roam freely in Nara Park, nudging tourists for food and playfully snatching maps and anything else they think could possibly also be food. There are a number of temples scattered throughout the park, but Tōdai-ji alone is worth making the trip for. The main hall of this temple is one of the world’s largest wooden buildings, and it contains a massive 15-meter-tall bronze Buddha.

With onsite dining options and a location just minutes from the train station, the affordable Guest House Nara Komachi offers a great place to rest your head while exploring this city. 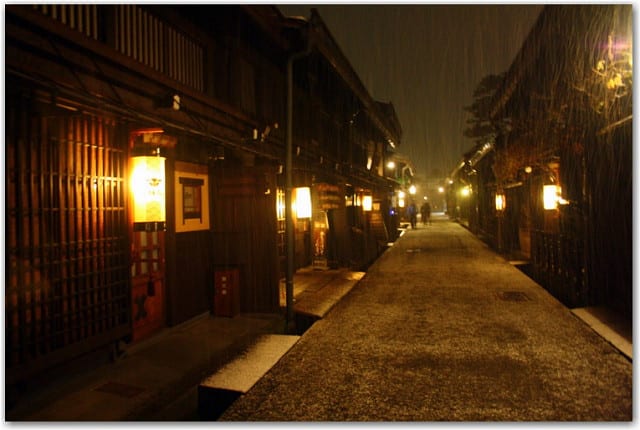 I’ll admit that I’m a little biased because I lived in Hida-Takayama for a year, but it will always be one of my favourite cities in Japan. It’s known for its Edo-period shop houses: Dark wood buildings clustered in narrow alleyways with noren curtains billowing in the entrance. Even after I’d lived there for months, the magic of this neighborhood never seemed to wear off for me.

Hida-Takayama has lovely morning markets by the riverside, and sake breweries where you can do tours and tastings. The whole town is sandwiched in the middle of the Japanese Alps, so there are also lots of places to go hiking, both in town and in the surrounding area.

With a colorful interior and even hot spring baths for guests to enjoy, The Oyado Koto No Yume is a Japanese-style hotel in an excellent location to explore Hida-Takayama. 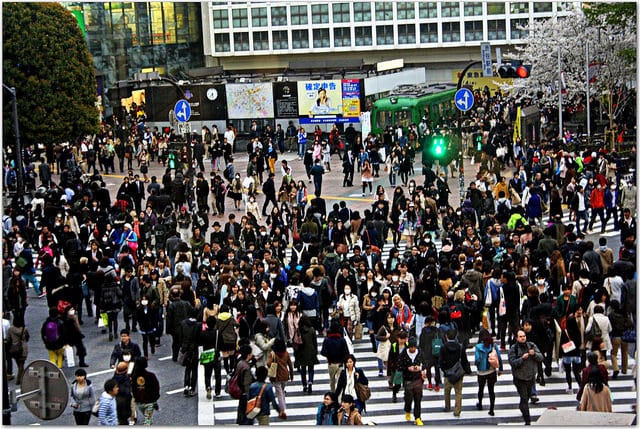 I’ve met travelers who spent a week, two weeks, even their entire trip in Tokyo, and it’s totally understandable. You can certainly see the highlights in a few days, but the more you see, the more Tokyo’s complexity reveals itself.

One (perhaps somewhat obscure) thing I recommend doing in Tokyo is checking out a jazz club. Jazz is hugely popular in Japan, and one of the memorable experiences I had in Tokyo was seeing this shy, stick-thin Japanese women start singing Ella Fitzgerald in this impossibly-rich, soulful voice.

For further reading about visiting Tokyo check out either of these posts:

Tips for Planning Your First Solo Trip to Tokyo, Japan

Tokyo is Too Much 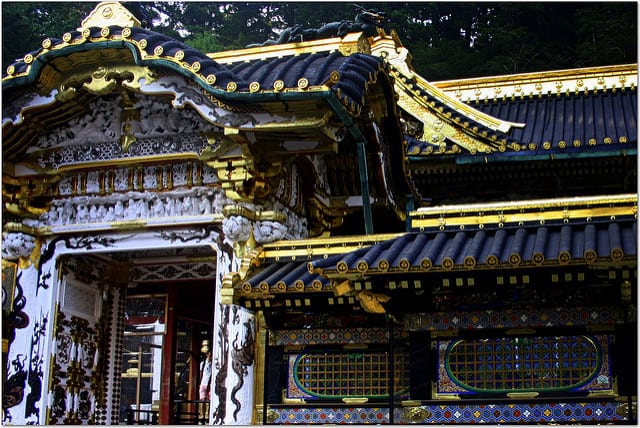 Nikko is the city found at the entrance to Nikko National Park, where you could easily spend several days discovering waterfalls, hot springs, and hiking trails. It’s also possible, however, to see Nikko’s UNESCO World Heritage temples and shrines in a day-trip from Tokyo. I mainly went to see Toshogu, one of the most elaborately decorated shrines in Japan, which is reached by following a long path lined by massive, centuries-old cedar trees. Even if you’ve already seen dozens of religious monuments during your trip, Toshogu is still completely remarkable.