I won’t lie, a part of me felt like I was giving up. Cashing in the glamorous nomadic lifestyle for a lease, furniture and a gym membership. What a sell out.

“How long are you planning to stay in Seattle”, other travelers would ask me, (“a year?”).

“I don’t know. Maybe forever?” I would reply and their eyes would widen with a mix of surprise, confusion and (maybe?) envy. I work in an industry where people strive to become more mobile, less attached, where freedom is the ultimate destination. Yet here I was, daydreaming about decorating schemes and my own desk.

So how did I come full circle, from a girl who wanted to never slow down to where I am today? I have a theory:

Back when I was working full time in DC, I felt trapped and stifled. I wasn’t crazy about where I was in my life on a variety of levels, but most importantly, I felt that I couldn’t really be my true self unless I was traveling. It was only with the freedom of the open road that I felt confident, capable, relaxed and more myself.

So I managed to loosen my bonds and travel full time. It was that mindset that led me to meet the man who is now my husband, that led me to build my career, that led me across continents, to place I’d never even dreamed of visiting. It was fantastic.

I know pretty early on that it wasn’t going to be forever. It took about 6 months before I started to feel the stress of constant travel . I spent a couple months stationary in China and was ready to keep going, but the feeling hit Mike and I again a year later in Argentina. We decided that constant travel wasn’t compatible with working full time, and instead decided to spend 3-6 months in certain places, using them as a home base as we traveled. That worked for awhile too, but by the time we reached Mexico last year, we knew we needed a new solution.

While travel had at first opened me up to what felt like my “true self,” constant motion now felt stifling. I started thinking about all the other sections of my personality that were withering because I was constantly abroad: my new-found love of cooking (hard to do without steady access to a kitchen), my need for creature comforts and maybe most importantly, my need for community, friends and a social life.

All of a sudden I felt like I was living half a life.

Luckily Mike felt the same way. He was tired of working odd hours for little money, of being constantly on the computer and not having friends or hobbies to call his own. He wanted to join a gym and get in shape, to get back into playing video games. We both wanted to have our own social lives and not depend on each other for literally everything.

We wanted a home. We didn’t know where, or how, and we knew we would have a lot of explaining to do to so many people who idealized our lives. I worried about how I would explain myself on the blog, so I never really did, until now.

I see now that it wasn’t about giving up. It was about evolving and finding the way in this world to be our most authentic selves.

Maybe us travel bloggers have had our sales pitch wrong the whole time. Leaving everything behind to travel is fantastic, if that is what you want, but what’s more important are the lessons and transformations we experience as a result of travel. If you can take a year or more to travel the world, that is wonderful and such a good experience, but if you can only manage a couple of weeks a year, there is a lot of good in that too.

Similarly, there is a lot to be said for working remotely, and having the freedom to travel and live everywhere. Some people can do this indefinitely, but not everyone has to or even wants to. Technically, Mike and I still have that freedom, we’re just using it in short bursts instead of long ones.

The move wasn’t about giving up travel completely either. Since we moved to Seattle six months ago, I’ve been on over a dozen plane rides, to places near (Vegas) and far (Sri Lanka). I’ve got potential travel plans out the wazoo for 2015. If anything, it’s way easier for me to travel now than it was when I was living in Mexico, or Argentina and constrained by our low income and the high price of plane tickets.

For Christmas, Mike got met something I’d been wanting badly. A really nice map to go above our couch, the kind with little pushpins to indicate where you’ve been. You won’t be surprised to hear we almost immediately ran out of pushpins and had to order two more boxes. We’ve done a lot of travel, but we also have a lot of travel left in us. It’s ingrained in us, an important part of our lives that we can’t simply abandon. 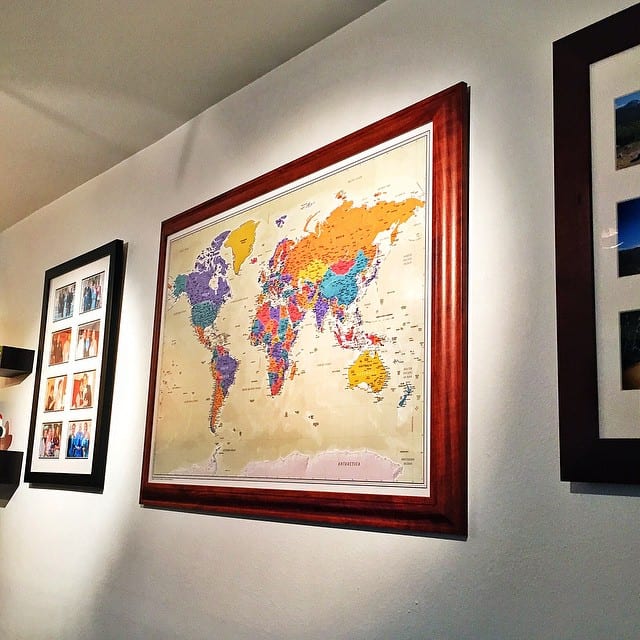 We’ll always be travelers, but for now we’re trying to be other things too.

50 thoughts on “From Digital Nomad to Something New”