Chances are that if you’re reading Why Wait to See the World that you’ve got more than a bit of wanderlust.  Whether you’re in the middle of a meandering sojourn around the world or just planning a couple of weeks to see the sights in Europe, there is no doubt that you already recognize the value of a global perspective.

However, not everyone knows just how easy (or cheap!) it can be to add educational attainment to that global perspective.  Plenty of people have studied abroad, but for many people, earning a bachelors or graduate degree in Europe can open doors to travel, adventure, and international perspectives while not making an unbearable impact on the budget.

Haven’t Missed the Boat (or the Plane, Rather)

First, if you have already started or even graduated college, please know that you are not out of luck!  Hundreds of opportunities for graduate study exist in Europe, almost all of them flexible enough to permit plenty of travel throughout the continent and beyond.  Getting your graduate degree in Europe means not only being in Europe but a smaller investment in time as well.  Typically, a Master’s degree can be earned in just a year, while a PhD can be had in three.  That is about half the time of comparable qualifications in the United States.

With that short length comes with the demands of top-notch coursework.  European courses tend to be demanding, with a great deal of emphasis on the ability of the student to work independently.  That extra rigor comes with an advantage – since you are in control of your studies, you get to set your schedule.

For example, British universities offer reading weeks during November and February to allow students to catch up with work.  However, if you are able to balance your coursework during the term (which, to be fair, is not difficult if you approach it systematically), you essentially have built-in vacations.  For example, when I was in graduate school in Europe, I spent my first reading week in Turkey and second in Spain.

Additionally, being in Europe means that you’ll have access to the incredible rail and air networks.  Want to get away to Scotland for the weekend?  Done.  Or perhaps you just read about an interesting cathedral in a history class and want to go see it.  With a cheap flight, you can be there by Friday evening.

All of this ignores the fact that you will likely be in a pretty incredible place even on ‘school nights.’  Living in London means lunch breaks on the Thames and access to some of the greatest global cuisine in the world.  Enjoy fashion?  Try Paris or Milan.  What about music?  Then Berlin and Stockholm are calling.  Your everyday will be the thing of your friends’ somedays.

Best of all, getting a graduate degree in Europe offers a number of other advantages, even over typical long-term travel.  Plenty of discounts are available to student travellers, ranging from reduced museum or musical tickets to free local transportation.  Additionally, most countries allow those on student visas to work as many as twenty hours a week.  This can be a big help on your resume, while also giving you plenty of extra travel money.  Perhaps most rewarding is the depth of friendships you’ll build.  To this day, some of the best friends I have are not Americans, but British or German.

Finally, having international experience on your resume matters greatly in a world that is becoming increasingly globalized.  Here too there are a number of advantages.  Most obviously, it opens doors to continued work abroad, as many countries allow those who have completed degrees to stay and find employment.  Further, while some may bemoan the fact that so many people are going to college now, one sure way to stick out is to consider an international option.

Speaking of affording it, it is worth noting that getting a graduate degree in Europe is not as expensive as you might think.  At a number of universities in Europe, tuition is free.  Instead, students pay a nominal fee (usually around 500 euros) that covers the costs of administering their enrollment and subsidizes their healthcare and local transportation.

At the other end of the spectrum are those universities, especially British ones, that charge increased tuition for non-European students.  Even these fees are comparable to in-state tuition at many American colleges.  Combined with the fact that your degree will take less time to earn, there could be a substantial savings.  Best of all, depending on the country and institution, some financial aid is available, including US Federal Loans.

Studying for a graduate degree in Europe isn’t for everyone.  It requires dedication to a field of study, the independence to make it on your own, and an openness to cultures far beyond your own.  That said, aren’t those the same reasons that call us to travel?

Kevin Newton is the owner of An Education Abroad, a company that helps American students earn full degrees in Europe.  After earning an MA in Islamic and Chinese Law, he got his dream job and then found himself spending as much time helping friends apply to European schools as actually working.

Kevin is offering 10% off his services to Why Wait readers who use the code WWTSTW.

Curious about Studying Abroad?  Read On For More Information:

HELP: I Want to Study Abroad But My Parent’s Won’t Let Me!

Language Learning On A Time Crunch

The Honest Truth About Studying Abroad

What Should I Major in for a Life of Travel? 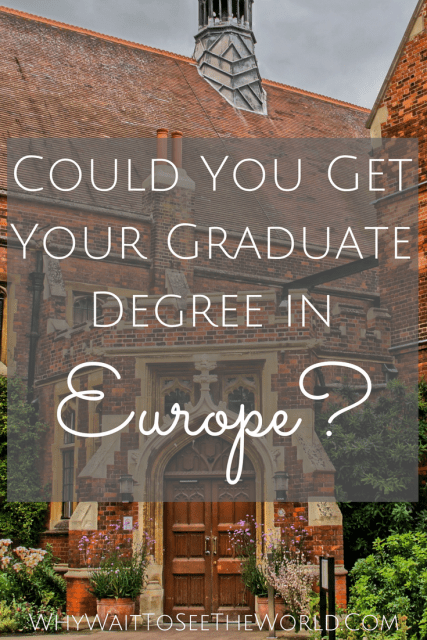 1 thought on “Could You Get a Graduate Degree in Europe?”