One of the major selling points for my house sit in Spain was finding out that the home was only a short bus ride away from Gibraltar. Aside from some vague associations with a massive rock, I knew absolutely nothing about this former British colony – now officially known as a British Overseas Territory – so I was instantly curious.

Besides flying directly into the territory’s tiny airport, the only way to reach Gibraltar is from a Spanish town in Cádiz Province called La Linea de la Concepción. Brent and I did have to flash our passports, but otherwise entering Gibraltar was more akin to crossing a large police road block than crossing the border into a new country (although I suppose it’s not technically a country).

So what exactly can you expect from this mysterious patch of Britain perched on the edge of Spain? 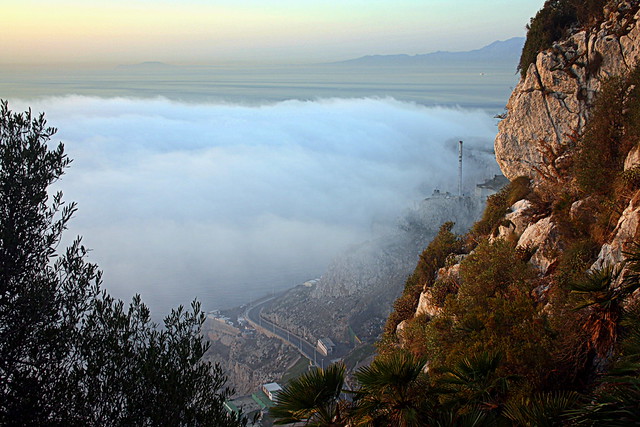 While I’m pretty sure most North Americans couldn’t point out Gibraltar on a map, in Britain, I get the impression that Gibraltar has some not-so-flattering associations with older cruise ship day-trippers. As a common port of call for Mediterranean cruises, this reputation isn’t completely unfounded. Gibraltar’s main street was packed with the visor-and-fanny-pack-wearing crowd, but when we branched off into the quieter side streets, we started to see that this town has some serious charm.

The smaller alleys are lined with centuries-old buildings, many of which mix Mediterranean, Moorish, and British architecture, reflecting the many cultures that have impacted Gibraltar at various points throughout its history.

Then there’s the famous rock itself. Approaching La Linea by bus, you can see this massive limestone ridge towering 1,398 feet upwards and redefining the meaning of epic. It’s possible to take a cable car to the top, but far more rewarding to make the steep hike. The walk is best done early in the morning, not only to take advantage of cooler hiking temperatures, but because you can watch the sun come up over Morocco, Spain, and Gibraltar at the same time – and it’s insanely magical.

The upper portion of the rock is actually a nature reserve, best known for its Barbary macaque monkeys which are the only population of wild monkeys found in Europe. The monkeys are pretty accustomed to humans, so you’re almost guaranteed to catch a glimpse of a few at some point. Although it goes without saying that they’re wild animals, so feeding, touching, or generally treating them like pets is best avoided. 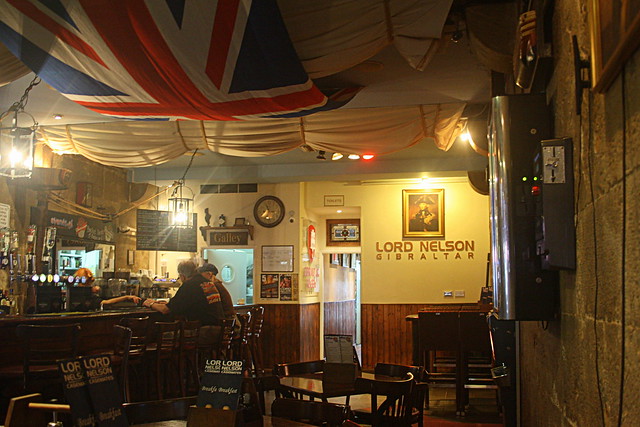 Initially, I couldn’t help but think that Gibraltar looked like a cartoon version of Britain with its red phone booths, police officers wearing old-fashioned helmets, and traditional fish-and-chips shops. Perhaps in part because of ongoing land disputes with Spain, Gibraltar seems hell-bent on distinguishing itself as British.

The streets are packed with British chains like Morrisons and Marks & Spencer, Union Jack flags fly everywhere, the walls are fitted with three-pronged electrical plugs, and the currency is pound sterling.

Interestingly, although Gibraltar looks like an exaggerated version of Britain on the surface, locals are fiercely proud of their heritage, separate from both Britain and Spain. English is the official language, but most residents are also fluent in Spanish, or speak a local dialect that blends the two languages. Gibraltar has its own flag, postage stamps, and media outlets, as well as a number of distinct local dishes that blend British and Mediterranean cuisine. 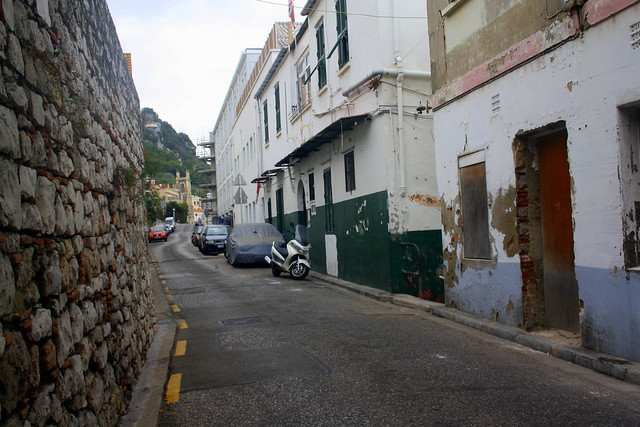 A few of the homeowners’ family members live in Gibraltar, giving me a chance to ask exactly what life is like on the Rock.

They described Gibraltar as a tight-knit, self-sufficient community. In an effort to strong-arm Gibraltar into joining Spain, the Spanish border with Gibraltar was closed for almost 20 years beginning in the 1960s. As a result, this small community of 30,000 residents is used to fending for themselves and taking care of one another. The territory has extremely low rates of crime, most sports leagues and clubs are free to join, and students receive free tuition to any university in the UK, along with allowances for flights home each term.

Only 4 square miles in size, it’s possible to walk pretty much anywhere in Gibraltar. Combine that with more 300 days of sunshine every year, and a location less than 30 minutes away from Africa and a stroll away from the rest of Europe, and I sort of want to move to Gibraltar.

4 thoughts on “Gibraltar: The Surprising Truth About ‘the Rock’”