Malaysian beaches are often overlooked with the magnificent beaches of Indonesia, Philippines and Thailand less than two hours of flying away.  That doesn’t mean you can’t find awesome beaches, however. In particular, the east coast of Malaysia has sneaky awesome beaches. The two major hot spots are the Perhentian Islands and Tioman. Yet there are a few more about, such as the island mentioned in the title of this post, Kapas Island.

The first time I’d heard of Kapas Island was by some long-term travellers I met on Sumatras Pulau Weh.

A few weeks later, my friend and I had befriended these long-term travellers (sidenote: shock horror they don’t have a blog) and by the time we went our separate ways they had convinced us to check out Kapas Island ourselves.

We were told to expect empty beaches, awesome sunsets, a relaxing vibe, and nice people. That’s four likes from me.

Things To Do In Kapas Island 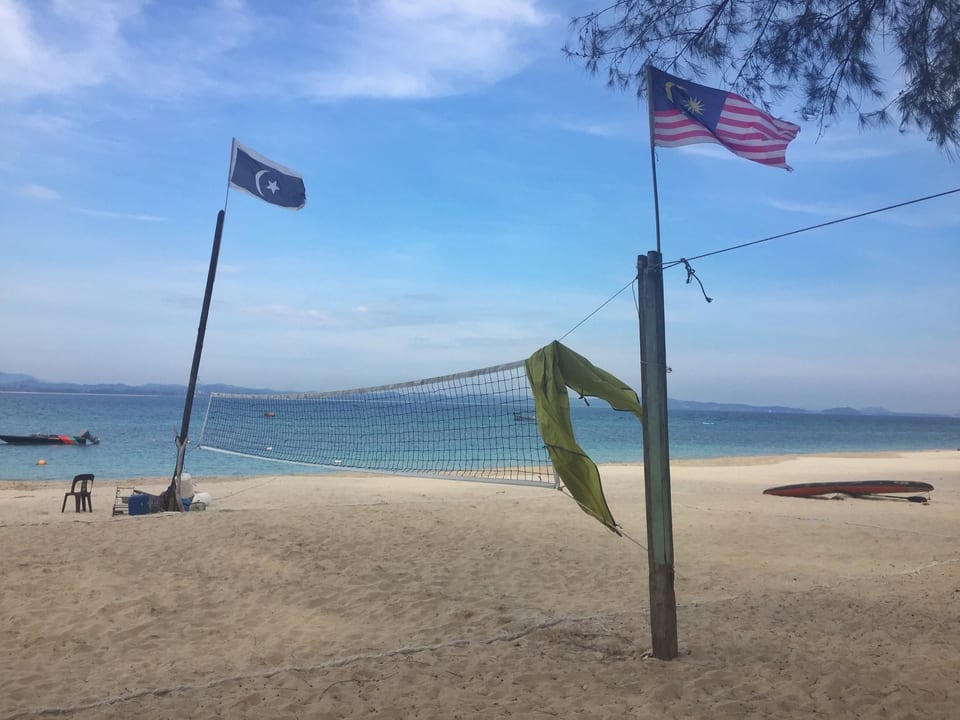 Snorkelling is the premier activity on the island. The sandy beaches are all facing the mainland and it is from here where most people start their snorkeling mission.

The coral was alive and well which is always a bonus in Southeast Asia.

As someone just learning to swim, I was gutted to discover no fins were available for rent, only life jackets. I believe this was to prevent people from damaging the coral, yay!

The best places to snorkel on Kapas Island varies day to day. What we found best was by talking to others on the island as much as possible to find out if they’d seen anything interesting, and if so where (because we all like to be sheep).

In general, there are plenty of your usual colourful fish found (read: Nemo and co.) all along the island but the things you are really looking for are the black tip reef sharks and turtles.

While on the island, I had the most luck snorkelling off the rocks to the north of Qimis restaurant where we found small shoals of baby sharks and a couple turtles (both firsts for me while snorkelling).

If you’re at one end of the island, at most you have a 30-minute walk to the furtherest beach. If you’re feeling lazy, you can find someone willing to take you there by boat and bring you back at a predetermined time. I’m not sure how much this is, 30 minutes isn’t exactly long and island life means you have plenty of time on your hands.

Snorkels and masks can be found for rent in various places on the island, usually 10 – 20 RM/day. We rented ones from our accommodation, Captain Longhouse, and were impressed by the quality.

Hang Out On The Beach (and sunsets)!

The beaches on Kapas Island are amazing. Like, legitimately the best I’ve seen in Malaysia. The island has no massive resorts so there isn’t ever many people on the beaches. There are five stretches of sand connecting by small walkways on the island and each is a white sand paradise. The beaches are kept clean which is always a bonus in Southeast Asia.

We were told the sunsets were epic on the island, ‘unfortunately’ we only had a couple of good ones. But as the sun goes down, the vibe on the beach is awesome and the mosquitos don’t hang out on the water’s edge with you.

On the two main beaches with accommodation, you’ll find a few volleyball courts permanently set up. If you have your own ball, you can start a game whenever otherwise ask your accommodation where you can borrow one from.

If you see a game going, they’ll almost always be informal and you’ll be welcome to join. Volleyball is the national sport of Kapas Island.

Hike To The Other Side Of The Island

Given the size of the island, this hike was more taxing than I expected. If you aren’t a fan of hiking, you can give this a miss as you only end up at a stony beach on the other side of the island. But if you want to walk on something other than sand for a while (no roads or cars on this island!), this is a good 1-2 hour walk.

Owls are a nocturnal animal unless you’re Kobe the local owl usually found hanging out around Captain Longhouse during the day. He lets you get up close to him for a selfie (no touching) but the weirdest encounter I had with him was one night at about 1 am. I couldn’t sleep so walked down to the beach for a swim only to find Kobe standing on the water’s edge, much like a human would. Random!

I’m not a big fan of scuba diving, but there are some places that can organize day trips further out off the coast. I can’t talk too much about this, unfortunately. 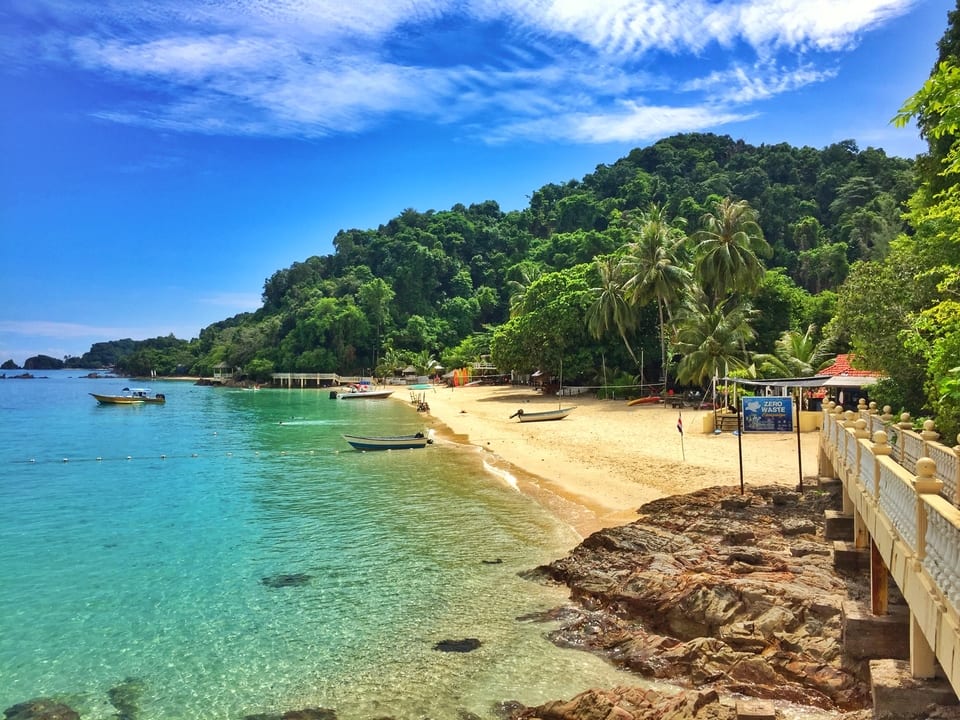 Beach camping is certainly something different. There are three campsites offering tents on a limited basis for you to use. Alternatively, you can bring your own tent and expect to pay 5 – 15 RM/day for the site.

Longsha Campsite is the most popular campsite on the island, but honestly, it was cramped and didn’t look comfortable with tents nearly touching each other. We took a walk south to Captain Longhouse and really liked this place. The longhouse is a traditional form of housing in Malaysia built on stilts with a room of bunks and private rooms. Below, the longhouse was a place wherever you could pop your tent. We paid 15 RM/night total. There is a pricing list, but it’s informal so if you stay longer than a few nights, ask for a discounted rate.

This is the most popular form of accommodation on the island with quality and facilities varying. I spoke to people who stayed at Qimi’s (80 RM/night) and Kapas Beach Chalet (70+ RM/night), all seemed happy enough with the arrangements.

Turtle Island Resort is a secluded spot a short walk by the lighthouse, but I personally wasn’t a fan of the service here when all I wanted a bite to eat.

Alternatively, Gem Island is a few hundred metres off the northern end of Kapas Island and has bungalows over the water. You can also go here and possible see some turtles hatching on the beach, although I can’t guarantee the ethics as I don’t know anyone who went along. 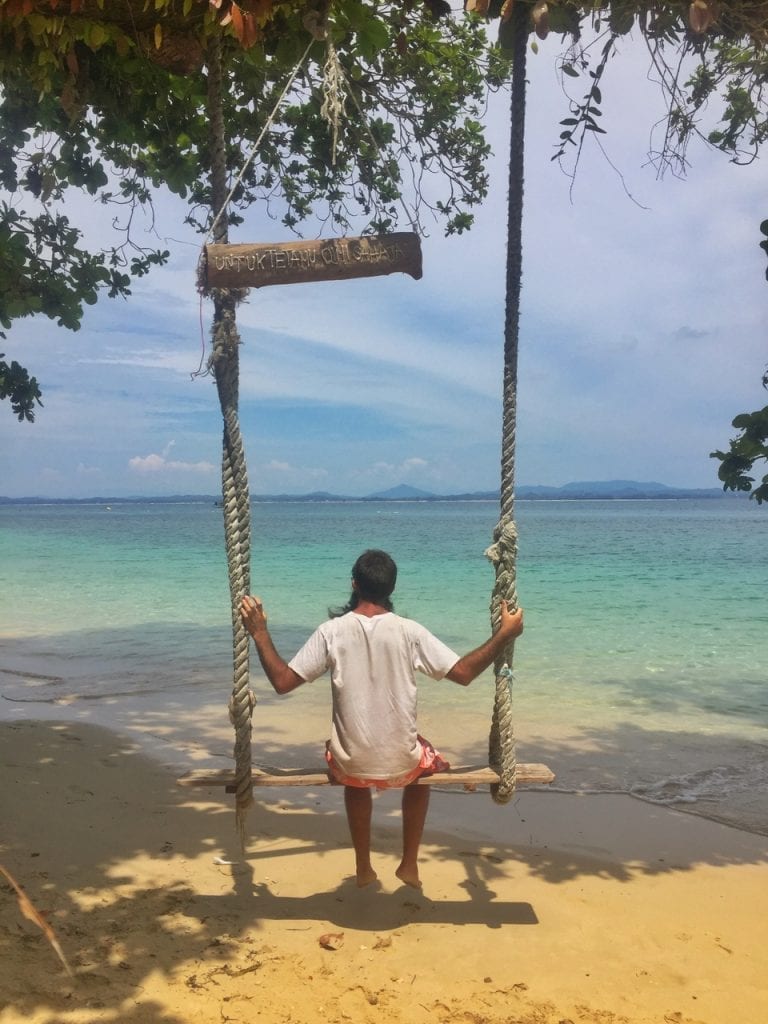 There are a few different restaurants on the island, but they aren’t open at regular hours. Most of the places on the island are closed from 2 pm – 5 pm which is super annoying if you’re not prepared.

My routine on the island was pretty simple really. I’d make my own breakfast with snacks brought to the island. For lunch, I would eat either eat more of my own snacks, or head to one of two places, the restaurant at Kapas Island Resort (KIR) or Kapas Beach Chalet restaurant.

For dinner time, there were two places I went regularly, KIR or Qimi’s.

Note: if you want to have dinner with Qimi you need to place your order before 4 pm to ensure they have everything required, and if need be they can bring ingredients over from the mainland.

Main meals prices would vary, I never paid more than 15 RM but usually was happy enough with 10 RM curry at KIR.

Note: most places can make a coffee on the island, you won’t be deprived of caffeine.

How To Get There 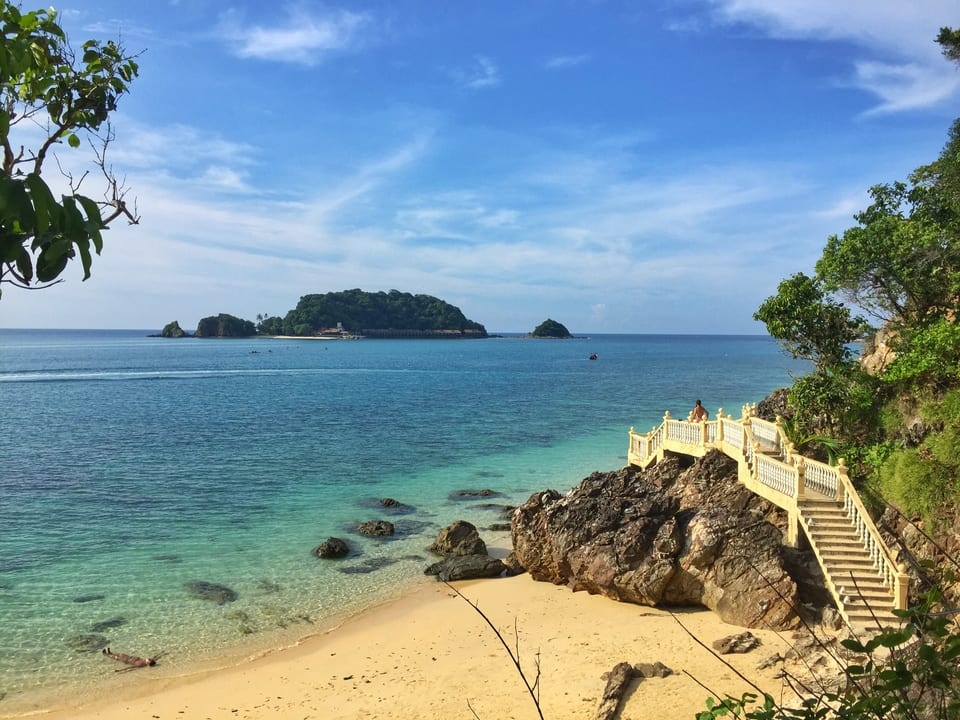 You need to get to Kuala Terengganu first, either by plane or bus from Kuala Lumpur

If you’re on another part of the mainland you might be able to fly or take a bus or two. From there, you need to take local transport to Marang (not to be confused with Merang) where you’ll be quickly pointed in the direction of the ferry terminal.

The ferries run throughout the day, with the last one leaving about 5 pm (make sure you get the earliest bus out of Kuala Lumpur if you want to get there on the same day). A ferry ticket cost 40 RM (return), with some hard bargaining you may be able to get it down to 30 RM. 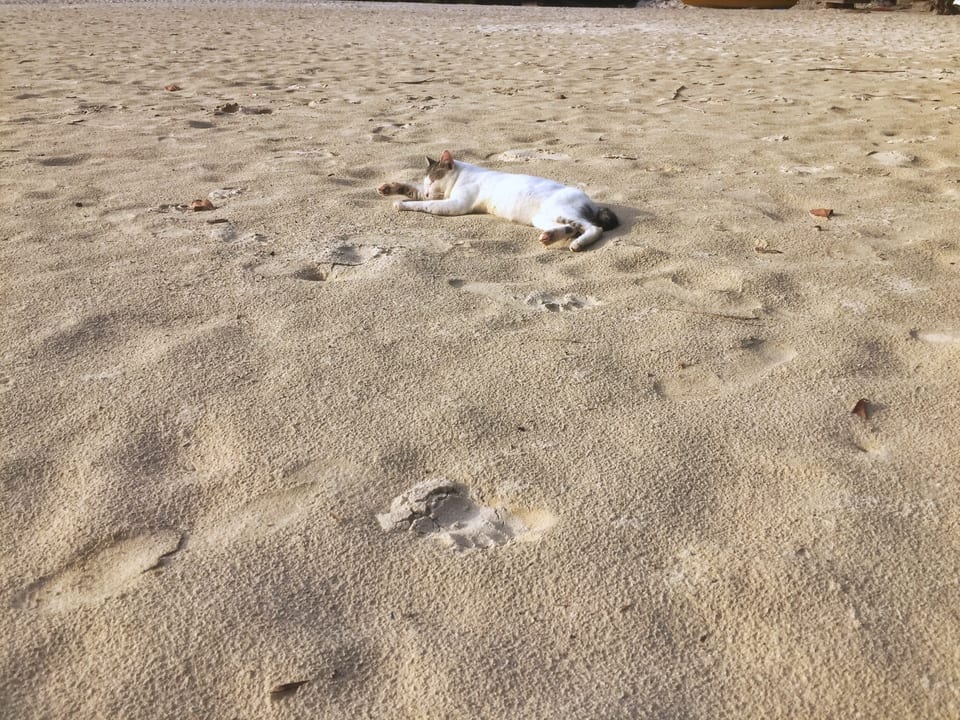 Avoid weekends: Malaysians love to travel domestically so in the weekends the island gets relatively busy. Interestingly, Terengganu is one of three Malaysian states (the others, Kedah and Kelantan) to have the weekend days as Friday and Saturday. Therefore you’ll see an influx of people on the island for Thursday, Friday and Saturday nights. You generally won’t need to book in advance, but there is a risk everything will be booked out.

Bring mosquito repellent: The mosquitos come out in force starting about an hour before sunset and hang around pretty much all night. You can buy some from the small convenience stores on the island, but they inflate the price.

The state of Terengganu is Muslim: This doesn’t mean much, but keep this in mind and be respectful. On the island, the locals will usually swim in long sleeves but don’t mind if you are sporting your newest swimsuit.

Want Booze? There Isn’t Much Availability On The Island: The only place we could buy beer was at a little beach bar near Longsha for 11 RM/can. That’s on the high end for Malaysia, so you’ll be better off buying alcohol on the mainland and bringing it to the island.

No/Minimal Wifi: There are a couple of places that have WiFi from time to time, and if you are at one of the nicer places you can get WiFi but if you’re travelling on a budget, expect to be offline while on the island. If you are desperate, you can pop back to the mainland and get some WiFi in Marang.

Don’t Expect Banana Boats Galore: Like mentioned above with the unavailability of fins, another way the locals appear to keep the island from falling apart is by not offering a tonne of offshore activities like banana boating.

Best Time To Visit: The east coast of Malaysia experiences the monsoon season from late-October/early-November to February when the seas and rainfall is heavy. The island is essentially shut down from November – Feb.

Bring Snacks With You: Everyday it would seem someone we’d met would be heading to the mainland for a few hours to do a food run. The restaurants can be reasonably priced, but with the opening hours being somewhat limited, you wouldn’t want to deprive yourself. 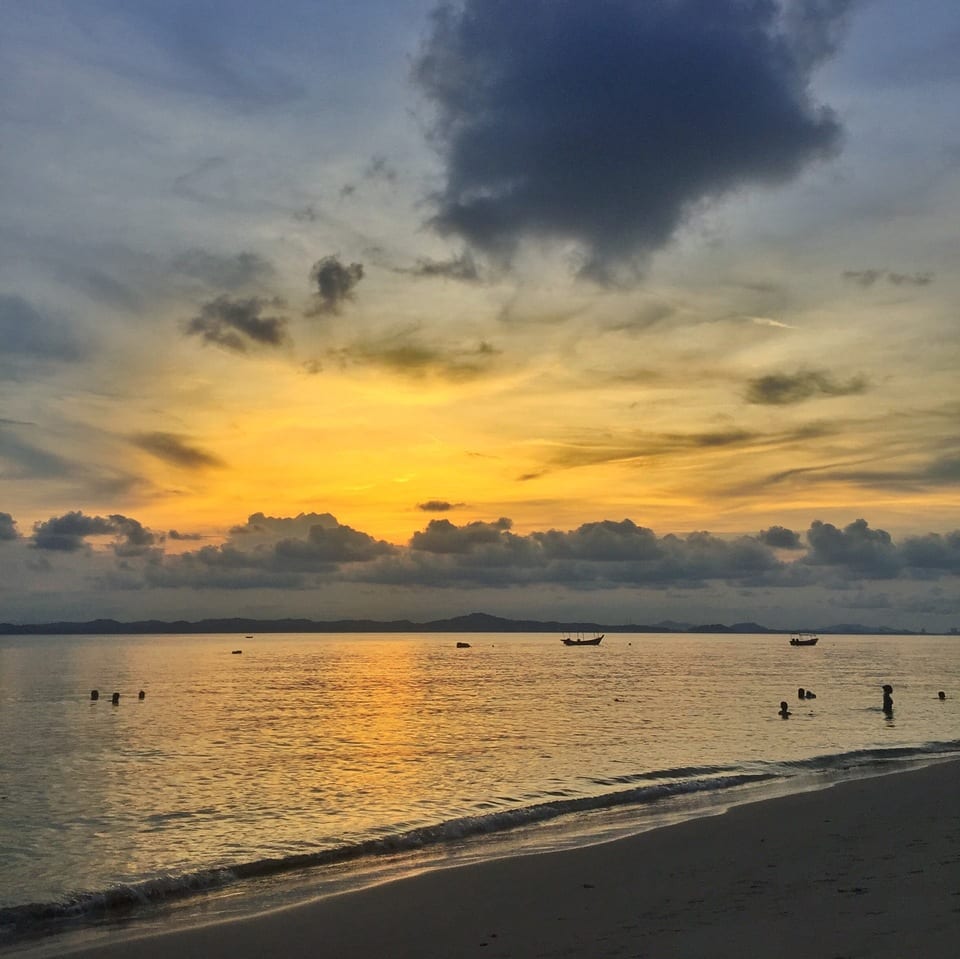 If you like to relax, where time isn’t a major concern, you’ll love Kapas Island as a way to disconnect from life.

I will be heading back there a few more times on my future visits to Malaysia that’s for sure.

Jub is a kiwi who has learned to fly, having been travelling more or less the last three-plus years. Jub has certainly slowed down his travels now, rather just happy hanging out in new places and trying to challenge the locals at their sport of choice. Places like Kapas Island excite him, beautiful places that locals have managed to more or less kept to themselves. You can follow Jub on his quest to experience the world through sport at tikitouringkiwi.com 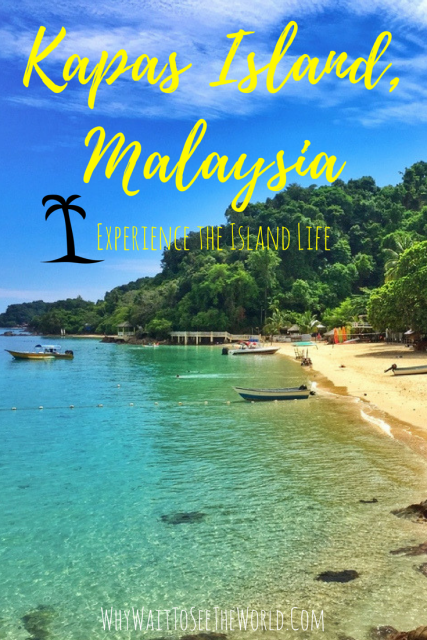