Ridiculously, I set out to climb a 14k foot inactive volcano in Guatemala to sleep under the stars while staring at a continuously erupting volcano less than a mile away with absolutely no gear, no training, and no idea of what I was getting myself into. 14,000 feet is half the height of Everest, by the way. Let that sink in. 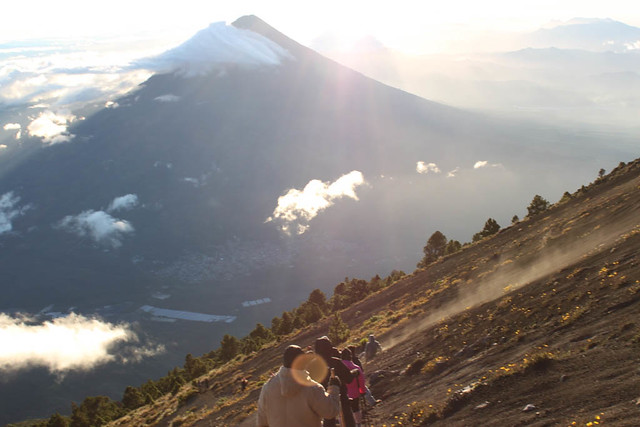 It is important for me to mention that I am not an active person.

I like to call myself a skinny-fat person. I give off the illusion of being in shape, but when you put me in a rigorously active situation, I’m the one keeled over in the corner wheezing. Cute, I know.

In reality, it was simply an experience I wasn’t going to miss.

I am not an avid hiker. My shoes were sneakers and the only pants I had to protect me from the 10°F weather at the summit were elephant pants from Thailand. Not exactly fit for hiking a 14k foot volcano. But I did it anyway!

We had heard warnings that the first hour was the toughest. I quickly fell behind and chose the slow and steady method. This hike would have been strenuous by itself but we were also carrying extremely heavy backpacks filled with supplies the whole way. It was heavier than when my backpack was filled with all my normal stuff; water is HEAVY! 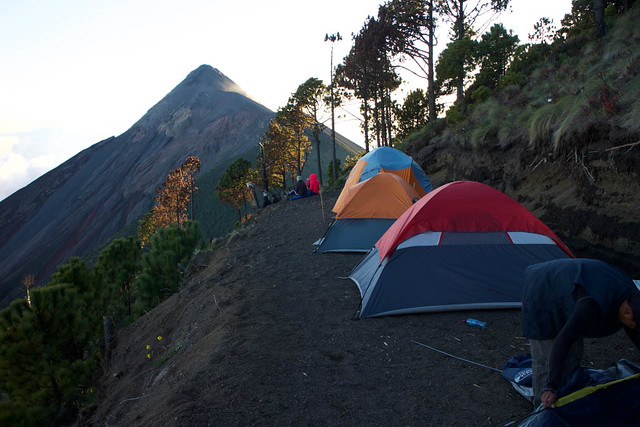 There were moments when I was close to breaking down, but ya know what? I knew going down was going to be just as hard so what choice did I have? It did go by pretty quickly, in hindsight.

It wasn’t easy, I felt like my lungs were going to collapse and I fell often and hard. I just kept telling myself it would be over at some point and I guess that was enough to keep me going.

At each rest stop, my friend and I were always the last two to want to get going again. The guide, who was a small little Guatemalan guy, would come over and say “vamos chicas” but in a sing-song, kind of way that we started laughing every time and it became a permanent expression that we used the remainder of our trip.

Eventually, I did make it to the campground and was immediately stricken with the view (and the cold!). We were above the clouds and the volcano tops were poking out here and there. The sun was just setting and it was unlike anything I had ever seen before.

As soon as it got dark, the show started. The neighboring volcano, appropriately named Fuego, started smoking and then every 20 minutes or so it would spit out varying amounts of lava. Yes, lava! It was hard to look away when you could possibly miss a major eruption!

We were all awestruck with everything that was going on around us. You could see the lights twinkling from the cities below, the stars, the full moon and the volcano. It was surreal. 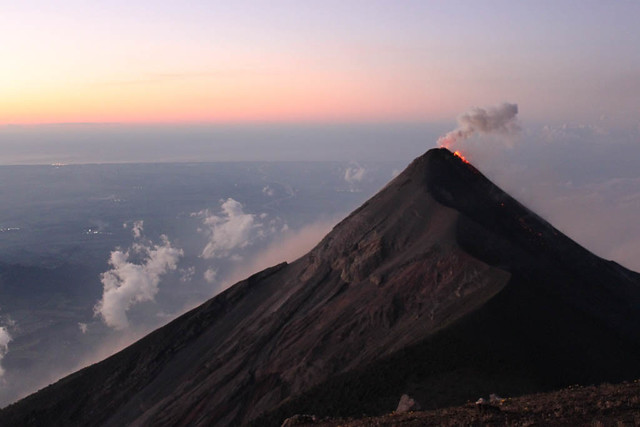 We had a 4am wake up to climb an hour and a half to the summit to watch the sunrise over the volcanoes. My friend and I were both pretty checked out on doing that, we didn’t have flash lights or head lamps and were pretty concerned about doing the hike in the dark. And/or we were too sore and exhausted.

Somehow, we did end up convincing ourselves to get out of the warm sleeping bags and begin the climb to the top. I still don’t know how this happened. This hour and half was the hardest thing I’ve ever done. It was actually straight up and often not solid ground; it was typically loose lava gravel so it felt like you were climbing through 2 feet of snow. The higher I went the more nervous I got about getting back down.

The summit was breathtaking. Can you imagine what watching the sunrise is like above the clouds? Yeah, I couldn’t either. It was insane. Pictures certainly don’t do it justice.

The descent ended up being a bit easier than I expected. From the summit back to camp it was like going down a hill in a couple feet of snow. You kind of put your foot down and let it slide through the loose dirt until it catches enough for you to do the same with your other foot. It was kind of fun. 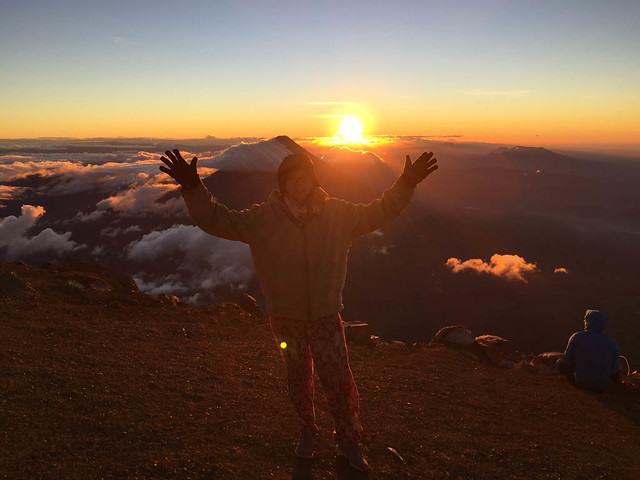 The rest of the descent from our campground wasn’t too bad once you got the hang of it. We found it was way safer and easier to actually jog down slippery, steep areas rather than try to carefully place each foot. A few hours in, your knees and hips start to really ache, though, and the fun factor is no longer there. The last 30 minutes were brutal. The ground was hard with loose gravel on top, which made it very difficult to get solid footing. We were hiking down in a group and the falling quickly became pretty funny. One person would fall, 2 minutes later another person would then the next and it would circle back around and repeat until we got to the base.

I could barely walk for days after because my muscles were so sore, but you know what? I climbed a 14k foot volcano! BOOYAH! Sappy moral of the story: You really can do anything you set your mind to! 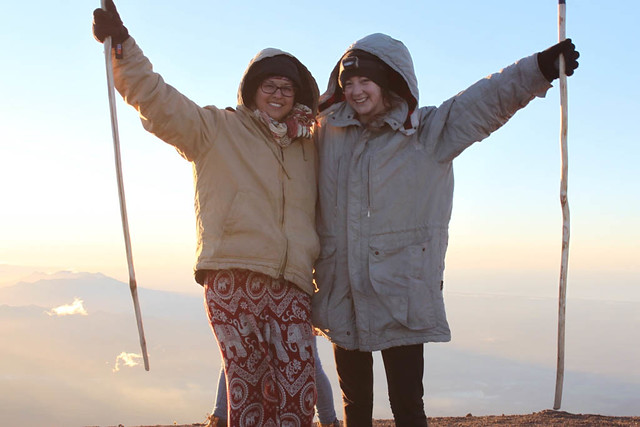