You may be wondering how I saved 20k in two years, ten thousand of that within an eight-month period before my trip. As a result, I’ve become a little bit of an expert on how to save a lot of money quickly. If I pulled this off, you probably can too. I’m not money genius, even now I struggle to keep a budget on a monthly basis. I had a couple lucky breaks, but I didn’t have a particularly high paying job. I did have determination though, and that gave me discipline.

In a lot of ways, saving money to travel is like going on a diet. When you want to lose weight, you have to change your habits, your intake and output, and you have to adjust the way you think about food. There are a million fad diets but we all know that in reality, the only way to lose weight is through healthy diet and exercise.

Similarly, the only way to save a lot of money fast without going insane or giving up is to spend less and make more. It’s not glamorous, and it’s kind of hard but it gets the job done.

So instead of some elaborate system, here is the common sense way to save money and still see a movie or have a cocktail once in a while:

When I made the concrete decision to travel I set myself a goal of saving $10,000 in 8 months. I already had $10K in savings and I figured I’d need around $20,000 for what I wanted to do. That meant coming up with an extra $1250 dollars a month, which wouldn’t be easy but I was something I felt was obtainable based on my situation.

So the first thing you should do, right now, is set yourself a goal. Think about how much money you need to make your dream a reality and how much you can realistically save per month while still being able to like, eat and stuff. You can also set yourself smaller monthly goals to keep up momentum.

It’s important when you do this that you don’t set yourself up to fail. You have to believe that the goal is obtainable, otherwise, the whole thing is still in fantasy territory. Set yourself a minimum amount, then view anything more than that as gravy.  If my goal wasn’t obtainable I would never have been able to save 20k in two years.

A word on debt:

Debt is the worst! I get many, many emails from people who want to travel, but feel trapped by their loan payments.

I don’t think that student loans should necessarily prevent you from traveling. It may make things a little tougher and slower, but loans can be worked around. It’s something you will need to take into account as you plan your budget and your goals. Personally I had, and still have, student loans that I pay off every month.

When you plan your travel budget, be sure to budget for paying your loans (trust me, you do not want to default while you’re on the road). Consolidate if you can so that you are only dealing with one monthly payment, and make it religiously, even as you’re traveling.

If it’s not just student loans we’re talking about, if you are deep in credit card debt or home payments or something, then the first step is to get your financial house in order as best you can before planning out your trip. Kind of a bummer, but once you straighten out your finances you’ll be good to go.

After you’ve set your goals it’s time for the hard part. Look at where your money is going and figure out where you can cut way back. You will find most of your new savings come from turning off your spending on things you don’t really need.

For me, this meant moving in with my mother to save on rent. If you can do this, I highly recommend it- nothing saved me more money as rent is usually a major expense and this was to key to how I saved 20k. It wasn’t always ideal but I kept my sanity. Even if you can’t crash with parents or a relative, downgrading to a smaller apartment or taking on roommates are both options for paying less rent.

It also meant giving up on a lot of poor spending habits. I stopped buying lunch at work and started bringing a bagged one. I gave up online shopping- the amount of money I’d spent on impulse while bored at work was out of control. I started passing up on social opportunities that cost a lot of money: concerts, fancy dinners or clubs and concentrated on things like hanging out at dive bars.

I didn’t strip my life to total austerity b/c I don’t believe that will work. To go back to my diet analogy: if you completely starve yourself you’re just going to end up binging later on. I still spent money, but I was much more conscientious about where it was going- only to things that truly mattered to me.

It wasn’t enough for me to just cut my spending way back, I also needed to get more money coming in. After all, I was only making 37K a year before taxes and there’s just so much you can squeeze out of that.

So I started looking around for other ways to make a few bucks. The biggest boost to my savings came when I sold my car. I loved my sleek black Jetta but it wouldn’t do me much good while I was tromping around Asia. My only regret was that I waited until I was down to the wire to sell it. If I’d done it earlier I would have had more time and probably could have gotten a better price for my baby.

Many people take it even farther than that and offload all that stuff that they won’t need in their new life. Honestly, I was a bit lazy on this front, but you can make a surprising amount of money selling your old clothes, books, electronics etc.

I also had money coming in from this blog which, while not a lot, was a helpful extra boost. Most people probably don’t have a profitable website but you can still pick up an extra part-time job. If you don’t have time for that look for smaller opportunities- babysitting, helping someone move, whatever little gigs you can pick up.

Every extra dollar brings you one step closer to your goal, so get creative! 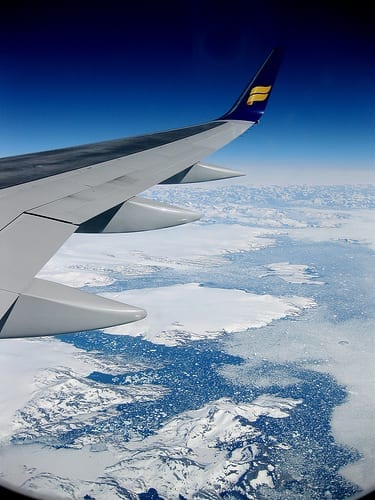 It’s hard. Living simply for many many months while everyone you know is continuing to be normal can really get to you.

Keeping your eye on the prize, reminding yourself constantly what you’re working for can help a lot. Every $20 I managed to save and not spend was a day in South East Asia. Every extra $100 that came in was some cool activity I would get to do somewhere. It’s delayed gratification but it works.  You have to remind yourself of the light at the end of the tunnel and that is how I saved 20k and stayed motivated to save.

Make yourself a separate savings account and don’t touch anything that goes in. The highlight of my month used to be depositing a huge chunk of my paycheck into that account. Watching the number jump higher and higher was a reward in and of itself.

Finally, don’t be afraid to splurge a little once in awhile. During my time of intensive saving, I still found the money to fly across the country to visit a friend in San Francisco. I felt like if I didn’t my restlessness would make me lose my mind. Spend money on things that really matter to you and you won’t spend it on crap that doesn’t.

That’s pretty much it and how I saved 20k in 2 years. There’s a pretty good chance that once you make these changes, you won’t ever go back to your old ways. I reached my goal over a year and a half ago, my initial trip is over, but I still don’t spend money on stupid clothes I don’t need or Starbucks coffee. It just doesn’t seem worth it anymore. Just like people who want to lose weight need to learn to eat better, I’ve learned how to spend in a healthy fashion. 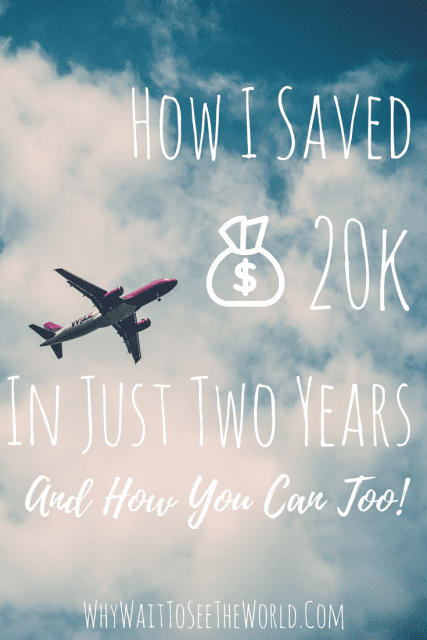