“Don’t go to Jordan,” they said. “How safe is Jordan,” they asked. Although I’m not a traveler that lets other peoples opinions change my own, it was hard to not be a little bit nervous when jetting off to a country that borders Iraq and Syria, two of the worlds most dangerous countries.

We’ve all seen on the news the unrest that is happening in these countries, and although I haven’t heard much about Jordan in the headlines, you still begin to question the impact their neighbors could be having on them.  So how safe is Jordan? I decided to find out for myself.

When I arrived in Amman, the capital city and largest city in Jordan, I expected chaotic disorganization, similar to what I’ve experienced in Asian countries, and to be overwhelmed with culture shock, but what I discovered was pleasantly surprising. I walked out of the airport to discover that Amman seemed to be functioning similar to how the Western world was.

I guess you can say that maybe I did let the images on the news get to me a bit, but it’s hard to ignore these completely when it’s all we see or hear about a certain part of the world. But as we watch the terrifying news of Syria, and refugees fleeing to anywhere they can, what the news isn’t showing is the neighboring Middle Easterner countries that aren’t just surviving, they’re thriving.

So How Safe is Jordan Especially for A Solo Female Traveler?

As a female traveling alone in this country, I expected to feel a bit uneasy at some point or another, it’s just a sad reality of being seen as a “vulnerable” tourist, and as a female, but I never once had a moment of doubt in Jordan. The high level of security throughout the country may turn off some tourists, but to me, it was comforting and made me trust Jordan even more. My hotels had metal detectors and security that checked cars coming in and out, the highways had multiple checkpoints, and you could genuinely tell that Jordan was dedicated to keeping their country safe for visitors and locals, and it was working.

On my one week trip in Jordan, I walked the busy streets of Amman during their Friday souk (market), I visited the ancient ruins of Jerash, the holy sites of Mount Nebo and Bethany, saw the jewel of the Middle East, Petra, and rode through the desert on a camel’s back. With each new city and destination, I continued to be impressed with how safe, and secure the country made me feel.

The locals on the street wouldn’t bother me or stare, even though I may have been the only white tourist walking around.  The shop owners didn’t beg me to buy their merchandise, but instead, welcomed me to their country, and I can’t even list the amount of times I was invited in for tea from locals. Being the cautious traveler I am, it took me awhile to really trust that these people were genuinely happy and friendly, and not putting on an act to try and scam me like in other parts of the world.

Before leaving on my trip, I read a lot about Middle Eastern hospitality, and everything is 110% true. The people in Jordan were so welcoming, friendly and genuinely wanted to make sure you had an amazing time in their country. I’m not sure if I’ve been anywhere before as happy and friendly as this country, and what made me upset, was the fact that so many people won’t even consider a visit to Jordan based off of what they hear on the news about their neighbors.

Everywhere I went I saw the effects that Syria and Iraq’s unrest was having on Jordan’s tourism. Almost every attraction I visited I’d have to myself, aside from some locals and school groups. In fact, I felt like I had the whole country to myself, which to some extent was great for me, but I knew this wasn’t great for the tourism industry and the locals who depended on their jobs in tourism to put food on their tables.

When I asked my guide while visiting Petra how many visitors the site saw in a day, his answer surprised me considering this site is a Seventh New Wonder of the World, and the most popular site in Jordan. He told me that Petra was seeing around 500 visitors a day, but when their tourism is high, they’d usually see 5000+ visitors a day. He told me that Jordan hadn’t seen a decrease in tourism this major since 9/11 in 2001, a sad reality that you can tell the locals are just waiting to change.

What I learned on my weeklong trip to Jordan, was really how wrong and ignorant people can be about parts of the world. It’s natural to not want to travel to places that are unsafe, but Jordan isn’t unsafe, people just assumed it is because it is located in the Middle East. What I ask of travelers is to open your mind to other parts of the world, and educate yourself before jumping to conclusions. The news will often only show one side of the story, and sometimes you need to formulate your own opinion instead.

For those questioning whether or not they should visit this country, I encourage you to go, and go now! In fact, this may be the best time to visit, when tourism is low and you can get the true cultural experience of having the country to yourself.

So how safe is Jordan?  I would say now is the time to go and that it is indeed safe!

Learn More About Travel To Jordan

What To See In Petra Other Than the Treasury

An American Girl in Jordan: An Interview with Cari Pittleman

Lauren is a Toronto-based blogger and marketing professional. Lauren’s blog, Twirl The Globe, was created to encourage and inspire other full-time professionals to get out there and see the world. You can follow Lauren on Twitter here, like her Facebook page here, or check out some of her photos on Instagram here. 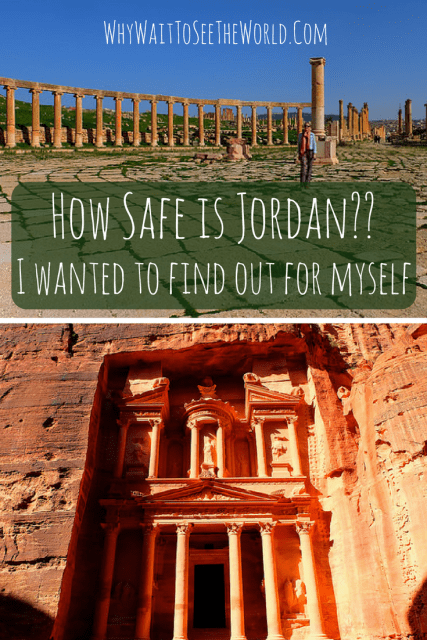 4 thoughts on “How Safe is Jordan? I Wanted to Find Out For Myself”