It’s common knowledge that I’m really, really into trying local food, and recently that’s culminated in an obsession with taking food tours. From exploring Chinatown in Manhattan to combing the streets of Trastevere Rome, I’ve found food walking tours to be a great way to get to know the food culture of a neighborhood.

Sometimes though, there are no already existing food tours- at least not the exact tour I have in mind, so I have to improvise a bit. Recently this culminated in Kim and my DIY tour of Flushing’s Chinatown where we ate some incredibly delicious foods at some great spots despite really knowing nothing of the area. I also did this last month, when Liz from Young Adventuress and I hit up the DC food truck scene to eat like a DC local.

This got me thinking. I mean sure there’s nothing quite like getting shown all of the tastiest spots in town by a local who really knows what they’re doing. But if that’s not an option, couldn’t we all be organizing our own mini food tour wherever we wanted?

With that in mind, here are my rules, and resources for creating your own 1-day food tour pretty much anywhere you like. Please chime in with your own suggestions below.

The Rules for Planning Your Own Food Tour

Doing a food tour of all of New York City is a terrible idea unless you have your own private chauffeur and a LOT of time. Even doing a food tour of Brooklyn is a terribly, terribly ambitious idea. Pick one neighborhood and/or one theme: Lower East Side maybe, or the best pizzas in Manhattan. We chose Flushing because neither of us had ever been to Queens and we both really love Chinese food.

We probably could have just rolled up in Chinatown, picked a place at random and had a pretty sweet meal, but that’s not the point of a food tour. We wanted to experience a variety of absolute highlights from the area. So we spent several hours beforehand researching using a variety of resources I’ll list below, in order to track down some of the best of the best.

Our findings took us to subterranean pocket restaurants and generic looking street carts I’m quite certain we would never have found on our own. It also gave us a better idea of the story and culture behind each place we went.

How many full sit down meals in a row can you eat? I’m guessing not that many, no matter how tasty the food is. The point of the food tour is to get an overview of the best an area has to offer, not to just pig out at one amazing place (you can come back and do that later).

Instead, focus on one stand-out item at each place on your itinerary: the famous soup dumplings from one restaurant, the perfect Taiwanese shaved ice from another. Share your dishes and try to taste as many different things as possible without filling up on any one thing.

If I were making my dream wish list of places to try in any one area, I could probably make it stretch on for hours and hours, with dozens of restaurants to be tried. In reality, though, you probably have one afternoon, and one stomach and once those two are spent you’re done. Curate your list carefully: most food tours I’ve taken have involved 5-7 different tastings, usually all within walking distance of each other. This seems like a good balance between trying quite a few different things and not feeling sick.

You may be about to sink into a food coma now, but after a 4-hour nap, you’ll awaken disoriented and somehow famished again. Make sure you have some leftovers you can dive into at that point or pick up extra cookies, dumplings, cheese, whatever while you’re out on your own personal food tour.

Here are some of the resources I have used in the past for culinary tourism adventures. I’d actually like to keep adding to this list- so if you have any resources let me know!

Yelp– user-contributed reviews on restaurants, bakeries, markets in nearly every major city in the world.

Serious Eats– Great articles, round-ups and restaurant reviews on a variety of US cities.

Urban Spoon– restaurant reviews and blogger feed aggradation from around the world.

Wikitravel– Great for learning about local dishes and iconic restaurants around the world.

Blogs are of course also a fantastic resource, with many bloggers writing detailed descriptions of where and what they’ve eaten abroad.

What are your tips and resources for planning a food tour? 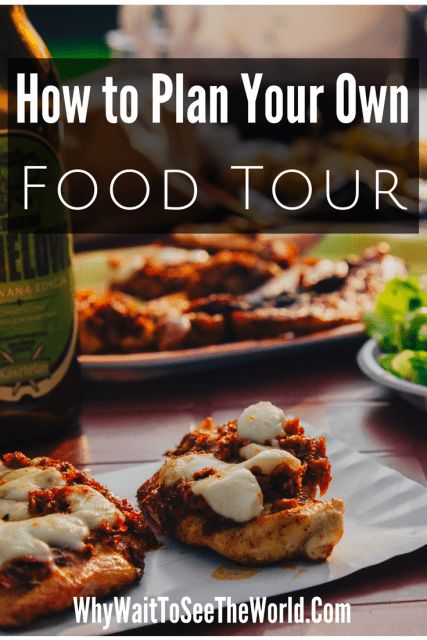 19 thoughts on “How to Plan Your Own Food Tour”