Leipzig surprised me. Although, I really didn’t know what to expect.

My only experience with Germany to this point was a quick, long weekend in Berlin. And although Berlin has the world’s greatest flea market and Sunday afternoon public karaoke (seriously, check it out), my experiences there didn’t make me super keen to return to Germany.

BUT! When the opportunity presented itself to bop over to a place I could barely pronounce, Leipzig, and a place I had heard about but knew nothing of, Dusseldorf, I jumped at it.

I like walking into cities and places that I know nothing about, that I have no expectations for. It gives me a clean slate to base expectations off of. I didn’t read any Lonely Planet articles or see any viral videos about Leipzig or Dusseldorf beforehand and I think that’s rare nowadays.

Sorry, but I’m about to burst that bubble for you.

A quick note, I visited these two cities back to back, one in East Germany and one in West Germany, at the same time as the recent clashes in Charlottesville and when racism, white supremacism, and bigotry reared their ugly heads in America in very public ways. I don’t want to ignore this coincidence and what it felt like being in a country whose history was completely shaped by white supremacy, but, in all honesty, I’m still processing how I want to use this outlet to express my feelings on the matter and how to encourage our readers to spread love not hate. Stay tuned.

Anyways, I started my reacquaintance with Germany journey in Leipzig. 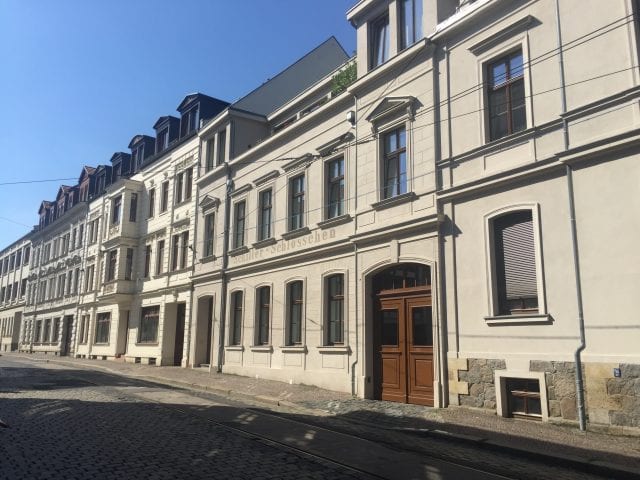 To give you a clear perspective on this city, yes, there are direct flights from London to Leipzig! Hello city break!

Popping out of the subway at the Markt Square stop in the center city was truly breathtaking even at 11 pm. Much of the original German architecture still stands in this part of the city and the buildings really took me back in time.

But set back in an older age, Leipzig is not. Surrounded by architecture from centuries pasts, this city is one of the few in Germany where more babies are being born than people are passing away. It’s growing and fast!

Over my couple days in the city, if I had had a drink for every pregnant woman I saw, I would have been constantly hammered. Young people are moving away from pricey Berlin and transplanting to Leipzig. Creatives are especially making their way to Leipzig, a city with a rich history in textiles, music, and creativity of every sort.

I was based in the beautiful Hotel Fregehaus during my stay which was situated smack dab in the middle of the city center. It was the perfect place to explore from and to come back and relax in. The courtyard felt like it was straight out of a storybook. Rooms start around 75 Euro here and even have options for families with 2 bedrooms starting at 130 Euro a night.

This will always be my favorite way to explore a new city. Leipzig was the perfect place to do this. As you wander the alleyways and walking streets of the city, you’ll be privy to the sounds of the city. As a city with a strong connection to the likes of Bach, Mendelssohn and Wagner, and with one of the most renowned music schools in the country, and perhaps Europe, Leipzig draws in musicians from around the world.

Street performers are everywhere, and they are not your average street performers. Donning percussion and brass instruments, you’ll hear the works of classical composers being played by students dressed in button up shirts and skirts with stockings from the Modern Music School of Leipzig, instead of the typical scruffy hippie crooning John Mayer with a guitar. The music bounces off the buildings in such a way that it really transports you to a different era.

As a hotspot for trade for centuries, Leipzig is full of covered courtyards and passageways that are bursting with architectural details and stories. The first trade fair courtyard was built in Leipzig in the 1500s and many followed in the coming centuries. Each carries architectural elements from the century they were built so no two trade fair passageways are the same.

The infamous German writer and poet, Goethe, left his mark on Leipzig and actually spent a lot of time in one of the most famous of these promenades, the Mädler-Passage, which is home to the Auerbachs Keller restaurant that can still be visited today. Don’t forget to rub the left foot of the Mephisto sculpture before making your way into the cellar for luck!

I highly recommend taking a walking tour of the city to find all the hidden gems and to fully capture the details. Even on a rainy morning, I really enjoyed my 2 hour tour of the city center with Leipzig Erleben Tours. Their typical 1.5 hour walking + bus combo tour is only 16 Euro and can be done in English. 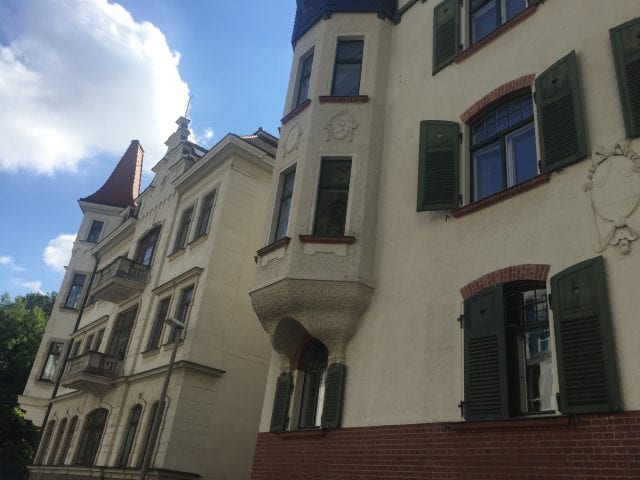 The Leipzig Card makes it incredibly easy to get around Leipzig and the surrounding areas, including the Spinnerei (I’ll talk more about that in a few!). Public transportation is well planned out in Leipzig, because duh, it’s Germany! Thus making it a great way to get around and explore the city. The Leipzig Card gives you unlimited rides on public transportation in Leipzig.

As an added bonus, the card gets you discounts or free walking, tram, bus, tours and discounts or free admission to a lot of museums and attractions around the city. You can purchase a 1 day or 3 day card before you even arrive, thus giving you plenty of peace of mind!

(Note: if you don’t purchase the card, the ticket machines for the subway can be a tad confusing and they only take Mastercard and bills smaller than a 5 Euro! I learned that one the hard way!)

If you know me at all, you know I’m one of the least coordinated humans on the planet. Because of this, I try to avoid two-wheeled vehicles or anything that can go faster than walking where I’m not in a padded bubble while traveling.

Somehow, I ended up on a 4 hour bike tour of Leipzig with Lipzi Tours, however. I can happily report that I came away unscathed and I’d actually do it again!

My tour guide was phenomenal and the city of Leipzig is super bike friendly in that there aren’t many cars or crazy intersections. The only thing you need to look out for are the tram lines in the road, I almost got my tire wedged in there a few times. 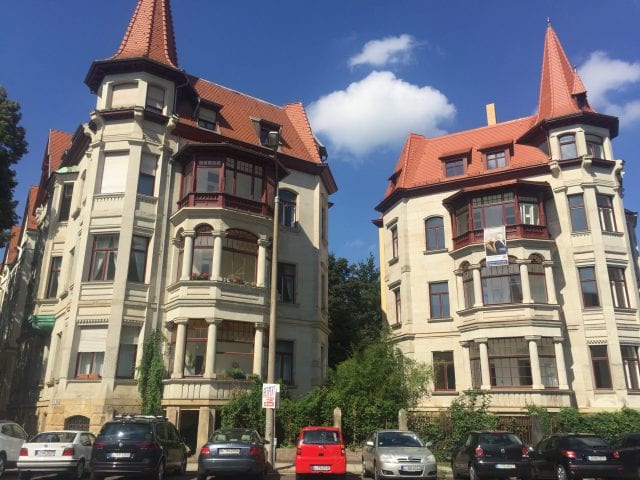 Leipzig is the culmination of a lot of smaller towns that eventually sprawled and came together to form Leipzig. Each neighborhood has its own personality, so you really need to see them all to get a full picture of what Leipzig is really like.

There’s greenery around every corner in Leipzig and you can literally bicycle through a dense forest just 5-10 minutes from the city center. We even biked through a massive park that rode along next to the Leipzig Zoo. There were a few pull off areas that gave you clear views of giraffes, zebras, and other animals!

We rode through Plagwitz, the city’s old industrial quarter which is now home to the Spinneri, an old textile factory complex turned artist sanctuary chock full of galleries, creative workspaces, and everything in between. Art is the primary focus of Plagwitz and you can almost feel the tremors of creativity pulsing from this area of the city. We rode through an area of old, long-abandoned factories that have become a graffiti mecca of the city. Even in broad daylight, a few graffiti artists were busy creating on any surface that called to them. Inside the walls of these factories came alive at night, I was told, with bars and event spaces home to rec centers with ping-pong tables, music nights and more. Tucked away, and virtually unrecognizable from the outside, was a Chinese restaurant that apparently was the best in the city! (I seriously don’t think I could find that place again if I tried, it was so hidden!)

I think it’s important to mention that I know the stigma that artist housing and abandoned factories turned into pop up spaces conjures in your mind. I assure you, it has been done in a safe and respectful way. Leipzig has given these regions and people ample support and these spaces are not home to rif raf and dark and dangerous alleyways. These places are encouraged and supported and because of this, they have grown positively, friendly and constructively rather than darkly and dangerously. 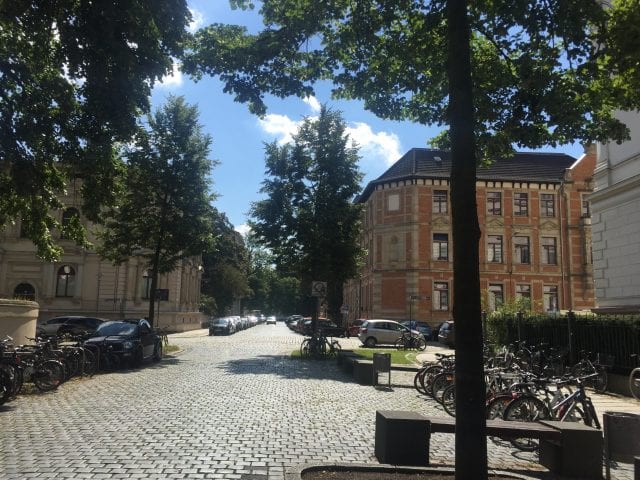 Leipzig truly surprised me. The creativity and quirkiness of a city that has such a rooted history was refreshing. From 2 buildings, one from the 16th century and one the 17th century, standing next to each other that took 9 months and 9 years respectively to complete, to an old folk tale of a plank being thrown between two buildings to have food carried over because the men working in the stock exchange were sick of their food taking so long to get to them to a fountain being nicknamed the “prostitute fountain” because of a simple mistake, Leipzig was full of quirks that really added to its aristocratic charm.

If you’re looking for even more insights into visiting Leipzig, don’t just take my word for it, read this post about things to do in Leipzig.

Although you could easily brisk through the sites in a few days, I think the charm of Leipzig is in slowing down and wandering the streets of the various neighborhoods, enjoying a coffee or some German wine and chatting with locals. Relax in Leipzig and take in all that it has to offer.

I was hosted by Leipzig Tourism during my trip to Leipzig, as always, however, all thoughts are my own. 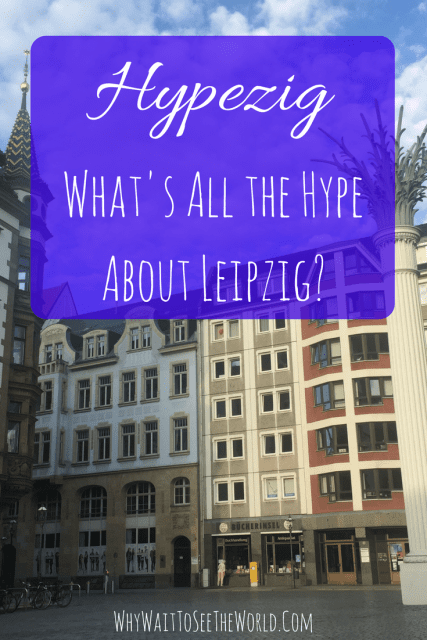 1 thought on “Hypezig – What’s All This Hype About Leipzig?”