As I’ve mentioned in the past I get a lot of emails from readers. Some are nice, some are mean, lots of them ask for advice that I’m usually not qualified to give.

This week I got an email from an 18-year old female reader with a question about travel during college. I’m hoping to crowdsource some suggestions for her:

Help! I want to study abroad but my parents won’t let me!

Later in college, I want to study abroad (Vienna, Austria, in fact!). However, my parents are completely against the idea, for safety concerns of course. But, also because they believe I won’t be ready – even a year and a half later. They’re afraid I’ll be taken advantage of, and from their vague forewarnings, probably will get caught up with boys and possibly drugs. Other than telling them this is no way near my plans, how can I ease their concerns?

But, I’m sure a major reason behind their worry is that I’ve never been away from them for more than a school day (I live at home). What are some good ideas to “build up” to studying abroad? Any ideas I present to them – weekend volunteer trips or conference visits hosted by my college – they shut down. Even when I travel with them, they don’t let me out of their sight for more than a few minutes, other than the hotel. Any ideas here?

The first thing I would say is that technically at 18 you are an adult, and you don’t need your parent’s permission to study abroad or travel. That get’s a little trickier though if they are paying for your education or your room and board.
It’s hard to dispute the benefits of studying abroad. It’s a great way not just to get a taste for travel but to experience independence and learn about the world.
At the same time, it’s probably hard for them to see you growing up and they may not realize that you’re not a child anymore. I would start by talking to your parents at a non-emotionally charged time. Find out what their specific concerns are and ask what you could do to earn their trust. Point out to them that you will soon be an independent adult and that you need to learn self-sufficiency and responsibility now.
If you still aren’t making any headway, it might be time to think about how you can become more independent on your own. And remember that in 4 years you’ll be out of college and then you can really do whatever you want with your life.

Help: How did you talk to your parents about studying abroad? What as persuasive to them?

Looking to Study Abroad?  Be sure to check out all of our resources here! 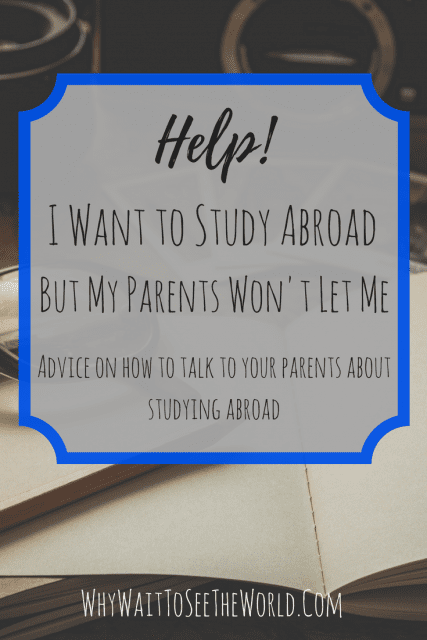 10 thoughts on “HELP: I Want to Study Abroad But My Parent’s Won’t Let Me!”