Peering around a dark, damp corner, in search of my source of good luck, I was startled as I felt a strange combination of fur and flesh touch my foot.  I looked down and saw a huge rat sidling up to me, and before you can say “Karni Mata” I was out of there 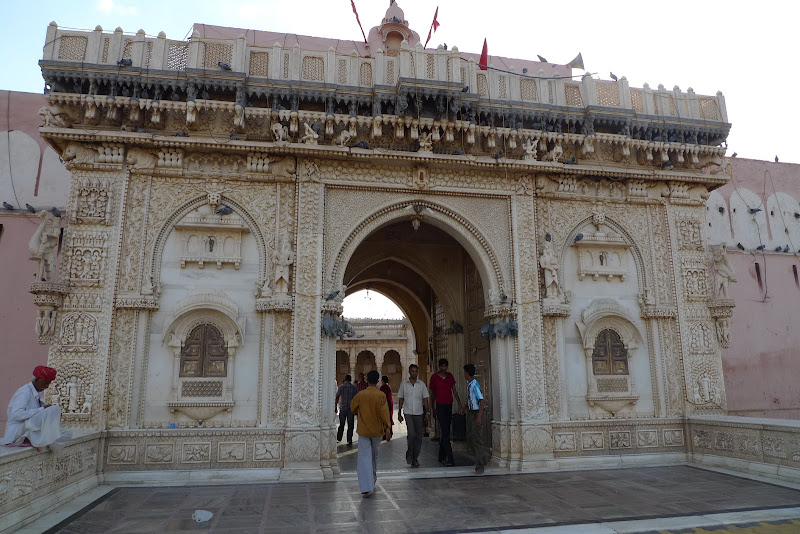 About thirty kilometers south of Bikaner lies, hands down, the most bizarre place I’ve ever visited.  The Karni Mata Temple is a beautiful marble temple, but upon arriving and removing one’s shoes, the carving on the doors make it clear that this is no ordinary Hindu temple.  The depictions of rodents foreshadow what is about to become apparent within a couple of steps: running around throughout the temple are thousands — perhaps tens-of-thousands — of rats.

The devout worshipers at the temple believe that Karni Mata — a female Hindu sage who is worshipped — was promised by the goddess of death, Yama, that all of her male descendants would be reborn as rats at this temple.  Therefore the rats at the temple are regarded as sacred incarnations of Karni Mata.

Though obviously I shouldn’t have been surprised in the slightest, knowing I was about to enter a rat temple, as soon as I saw my first rat in the hallway, I was definitely taken aback.  It’s such a natural human impulse to flee from rats, that to see one and then continue towards it (and thousands others) is a strange behavior, indeed.  The outer courtyard isn’t swarming with rats as they congregate in areas filled with food — brought as offerings by worshippers.  Inside a covered room within the temple lies the holiest part of the temple, and, needless to say, lots more rats. 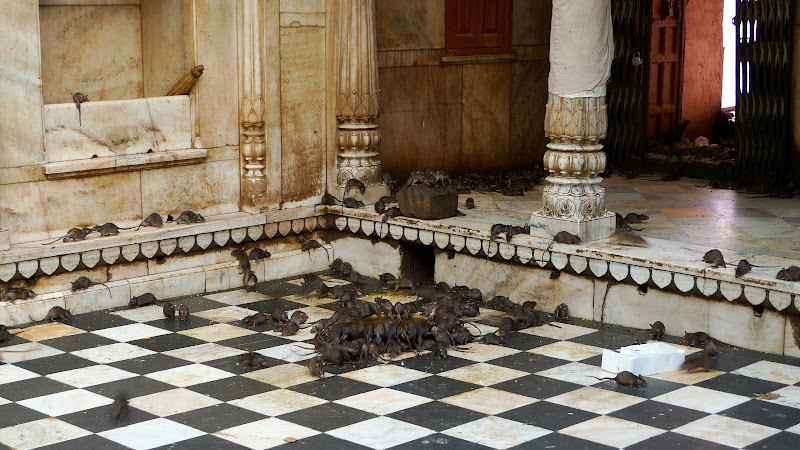 It is believed to be good luck to see one of the five white rats that are at the temple.  As my friends and I were looking for one, we headed into a dark, damp, corner where some people had congregated.  As I tried to peer in, I felt the bizarre sensation of a rat brush against my bare foot.  As soon as I felt the slightest brush against my skin, I quickly backpedaled — my heart beating a bit faster — to a more rat-free zone.  Fortunately for me, it’s also considered good luck to have a rat run up to your foot, so while seeking out one form of good luck, I received another such form — albeit without my permission.  I walked very carefully throughout the temple, shuffling my feet when I could, because if you step on a rat, you are implored to purchase a silver statue to put down in its place. 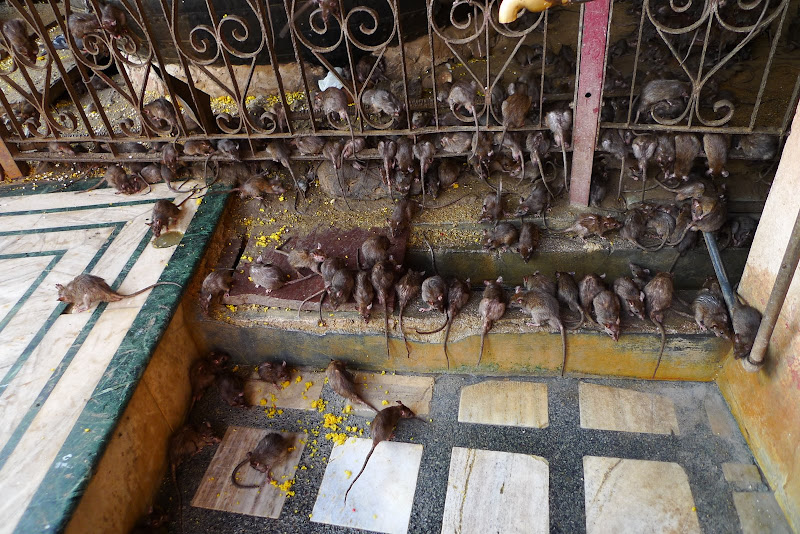 I believe the photo I had my friend take of me sums up a lot of my experience at the rat temple.  Wanting to prove to the world that I had visited the rat temple – and perhaps to freak out my Mom a bit – I searched for the corner of the temple with the highest rat density.  With a bit of trepidation I approached, handed my friend my camera, and squatted down, turning my back to hundreds, perhaps thousands of rats.  I smiled, proudly, at my sense of accomplishment putting myself so close to these rodents.  My friend, though, ever the perfectionist, took his sweet time taking the photograph, switching settings, zooming in and zooming out to get just the right shot.  As I sat there, waiting, coming to terms with just how many rats there were behind just one of me, my ear-to-ear grin was quickly deflating.  My lips sunk, my eyebrows raised up, and I could almost feel the rats coming at me from behind.  The end result is a nicely composed photo, in which my face can only be described as my “take this F-ing picture now” face. 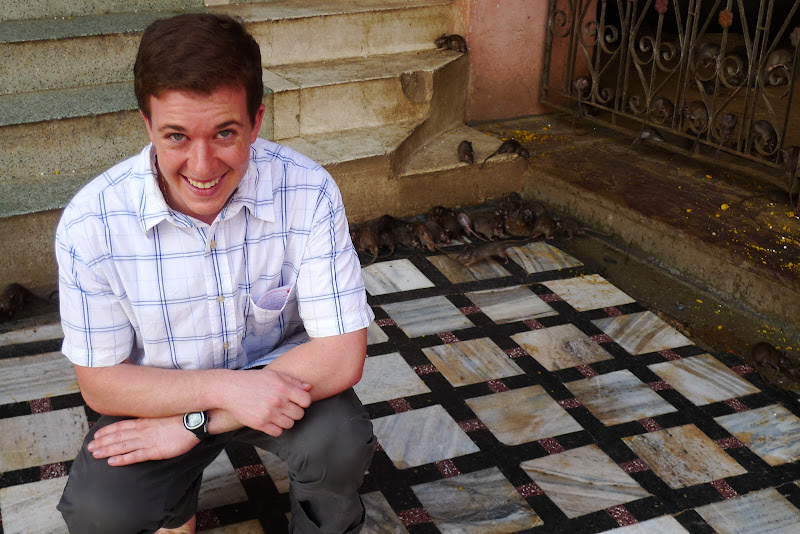 I came away from the temple with dirty feet, some (unsolicited) good luck, and a photo that proves that – even if I was not too happy about it – I survived a temple full of rats.

Alex Budak is a recent graduate of UCLA and is currently studying Public Policy, Technology and Social Entrepreneurship at Georgetown University.  You can see more of his travels on his blog Unpopped Collar, or follow him on twitter.

15 thoughts on “Inside the Rat Temple”