When people hear the word “safari,” destinations like South Africa and Kenya usually come to mind; however, Australia is home to its own opportunities for unique wildlife spotting, most notably on South Australia’s Kangaroo Island. Because of its isolation from the mainland, the fact it hasn’t been affected by introduced species and that 1/3 of the island is considered a conservation or national park, the destination remains an untouched wildlife sanctuary. To help you make the most of your time of the island, here is a photo guide to the wildlife of Kangaroo Island.

Because there are no taxis on Kangaroo Island, booking a tour is necessary. While there are many excellent operators on the island, I went with Exceptional Kangaroo Island, as they allow travelers to mix and match experiences and will plan tours based on your interests. As Managing Director Craig Wickham explains, “We don’t have an itinerary, we have a conversation.”

While you can see wildlife in the summer, particularly at dawn and dusk, you’re most likely to get the best experience in the winter. Moreover, much of Kangaroo Island’s wildlife is nocturnal, so a night tour is often a smart option. 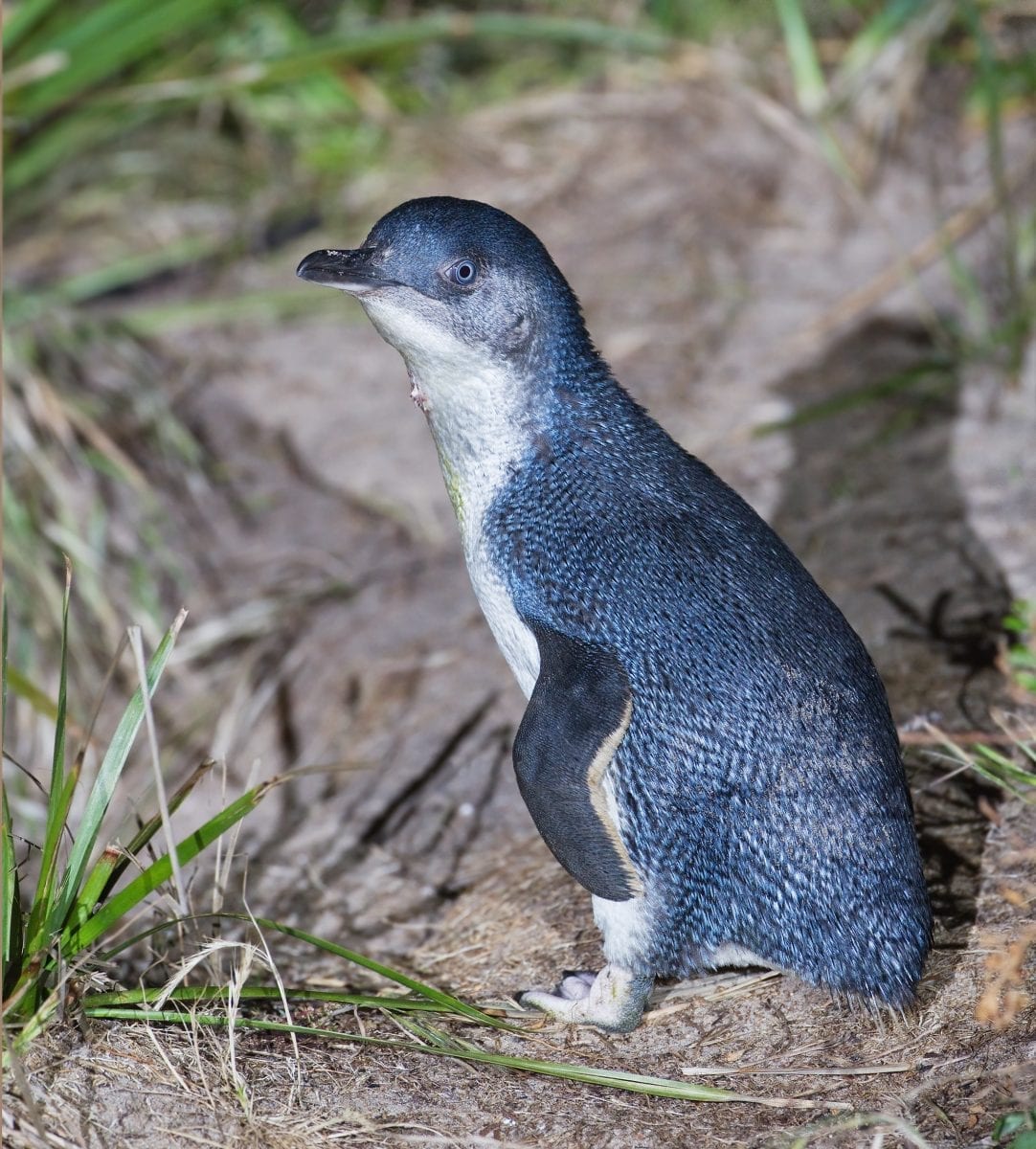 Aptly named, Little Penguins are the world’s smallest penguins, and can be found along the foreshore and wharf in Kingscote on Kangaroo Island. These penguins usually grow to be about 13 inches in height and 17 inches in length. To help protect themselves from larger predators they only come on land at night, so this is when you’ll need to visit. You can also see Little Penguins in Penneshaw, along the shore of Hog Bay Beach. While you can head to these areas on your own, taking a tour with the Kangaroo Island Penguin Centre  in Kingscote or the Penneshaw Penguin Centre will allow you to go right into their colonies. 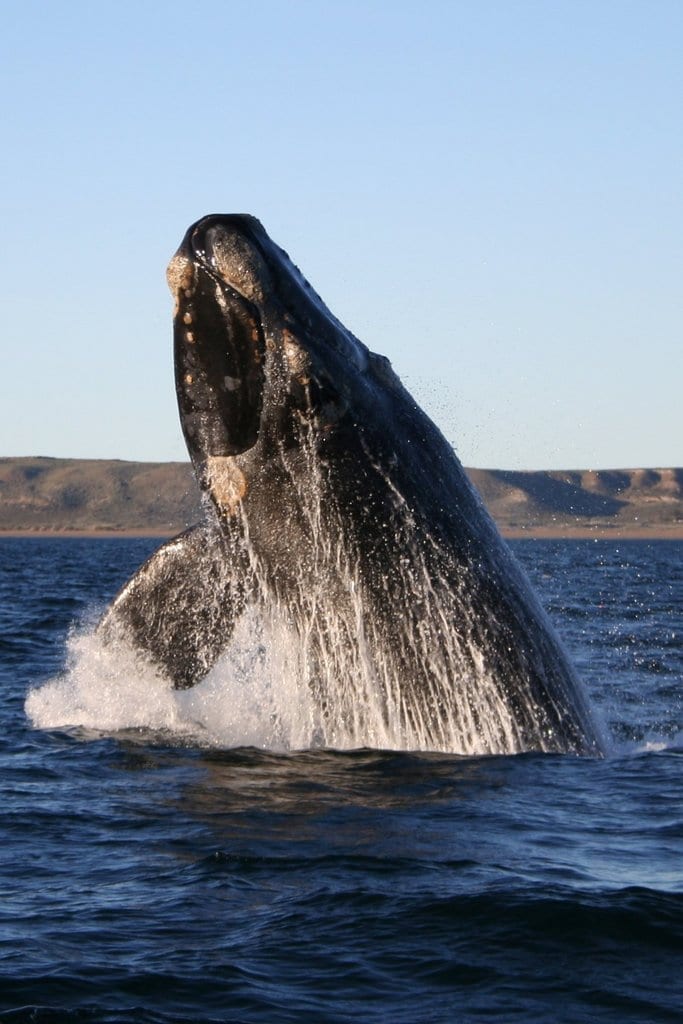 Between June and October, visitors can take a tour with Kangaroo Island Marine Tours to watch Southern Right Whales migrate to the Great Australian Bight, giving birth in the warmer waters. Southern Right Whales can weigh up to 1 ton, and were once endangered of becoming extinct from hunting. Luckily, the population has increased and there are now more than 800. 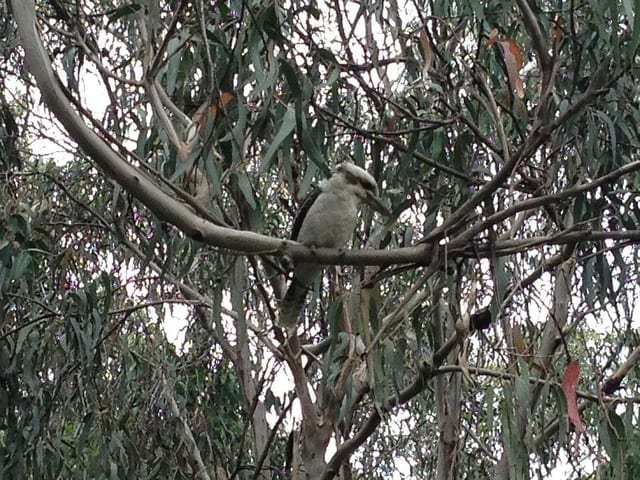 On Kangaroo Island, there are about 267 recorded bird species. For your best chance at spotting them – some of which include blue wrens, Glossy Black cockatoos, King Parrots, black swans and Hoary Headed Grebes – head to Duck Lagoon, Pelican Lagoon, Murray Lagoon and Lathami Conservation Park. 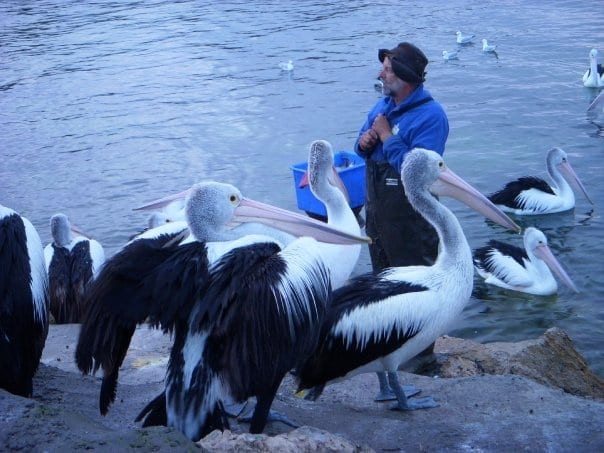 Every evening at 5:00 PM you can head to the wharf in Kingscote to see the “John The Pelican Man” feed the pelicans for AUD 2.00. Myriad pelicans fight to be the first to get fed, as John gives an enthusiastic and informative commentary on the birds. Moreover, pelicans have the most unusual necks, and you’ll be able to see the fish as it makes its way down the bird’s throat to be digested. 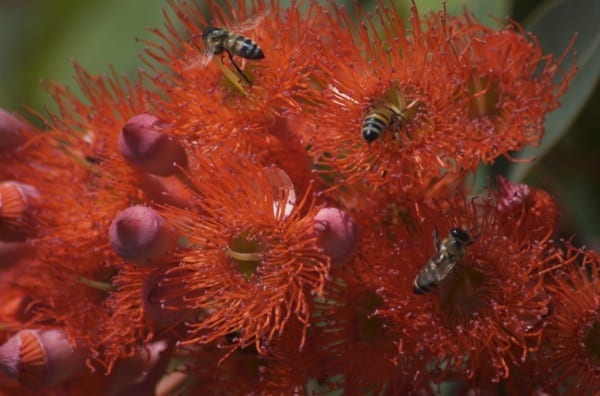 While many may not consider honeybees wildlife, experiencing Kangaroo Island’s honey culture is a must, as it is the only place in the world where you can get pure ligurian honey. Because the island doesn’t have their own native honeybees – the ones they now have are Ligurian honeybees from Italy – they can’t crossbreed. At Clifford’s Honey Farm you can see the bees at work and learn about the honey-making process, as well as sample different varieties of honey, honey ice cream, honey candy, honey wine, honey spa products and more. 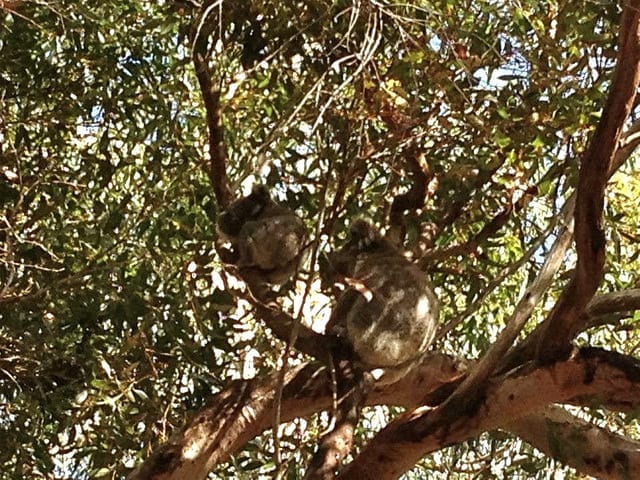 For your best chances of spotting koalas, kangaroos, wallabies, echidnas and myriad bird species, visit Hanson Bay Wildlife Sanctuary. Located on the western end of Kangaroo Island, I saw three koalas as soon as I stepped into the bush. Remember, you can tell a potential koala habitat if a tree has bare branches at the top, as this is where they feed. On a windy day, you’ll usually find them lower to the ground as they don’t like being shaken. On the other hand, kangaroos tend to be easier to spot when it gets cooler. If it’s hot out, try looking under bushes or where it’s shady.

If you’d like to feed kangaroos, Parndana Wildlife Park allows for this, as well viewing unusual animals like quolls, crocodiles and water buffalo. Animals like koalas, echidnas, hundreds of colorful parrots and cockatoos and larger birds like owls, hawks, emus, cassowaries and eagles are also showcased. 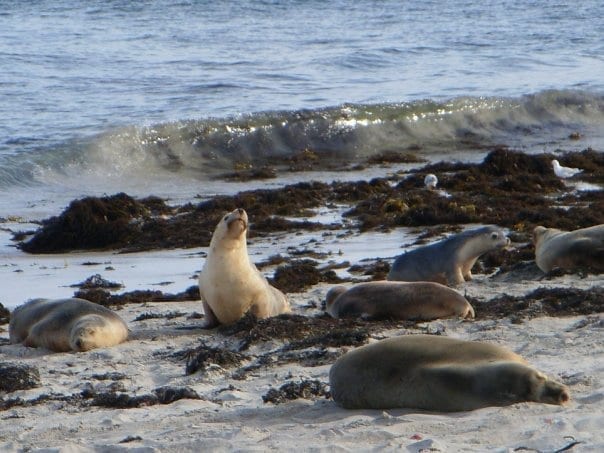 Seal Bay Conservation Park will guarantee immersion among Australian sea lions. On the South Australian endangered species list these sea lions are listed as “vulnerable,” which is one step down from “endangered.” They are one of the rarest species of seal, with their total population being about 12,000. At Seal Bay, where there are about 1,000 of them in this particular colony, you can choose to wander down the boardwalk and watch them from afar or take a guided tour right onto the beach where they sleep and play. 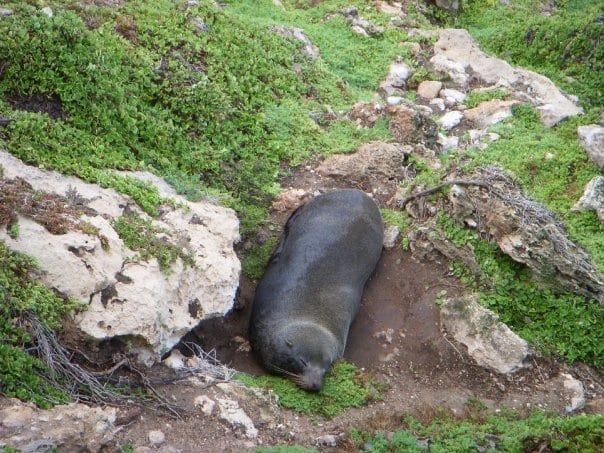 Around Cape du Couedic at Admiral’s Arch in Flinders Chase National Park, 7,000 New Zealand fur seals live and breed, including playful pups. The best time to see them here is in Australia’s summer (North America’s winter) when the males secure their territorial areas to choose a mate. 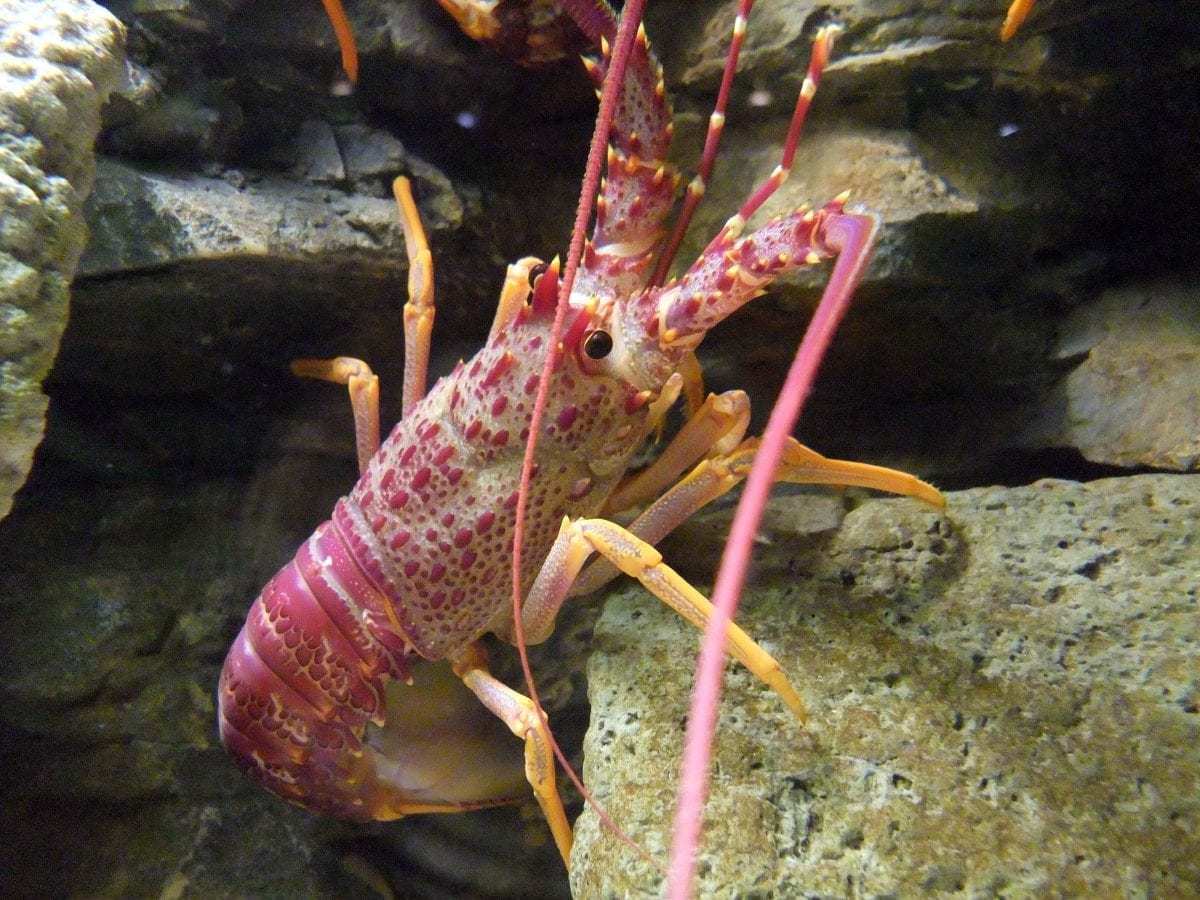 Kangaroo Island is home to some of the world’s most beautiful beaches, with soft white sand, azure waters and honeycombed rock formations. Along the coastline, there have also been more than 60 shipwrecks, some of which can be explored by diving. Some marine life you’ll view include the Leafy Sea dragon, Southern rock lobster, boarfish, blue devil and truncate coralfish. Snorkeling will also allow you to see some of this marine life that swim closer to the surface. 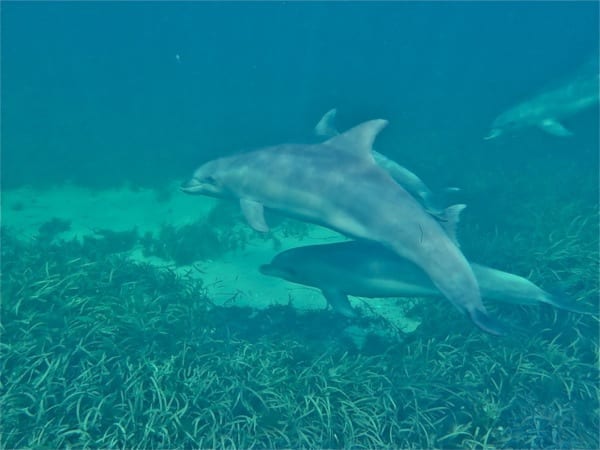 Kangaroo Island is home to the Bottle-nosed dolphin. At Emu Bay, the island’s only beach you can drive right onto, you’ll see playful dolphins jumping out of the water. You can also see this when staying at Southern Ocean Lodge, either on the property beach or right from your floor-to-ceiling glass windows. Additionally, surfing at Pennington Bay often offers unexpected surprises as Bottle-nosed dolphins show off their tricks along with the humans. Other popular locations for spotting these marine mammals include Pennseshaw, Hanson Bay and Snelling Beach. Common dolphins can also be seen around Kangaroo Island, although in deeper waters like when crossing to or from the mainland via the ferry.

For a close encounter with the dolphins, Kangaroo Island Marine Adventures offers a wild dolphin encounter as part of their Dolphin Watch program, encompassing IDing and tracking of the animals as well as assessing recruitment, dispersal and survival rates. Swimming with the dolphins is also part of the experience.

Jessie Festa, a New York native, is a world traveler who is always looking for a new adventure. She stays active through dance, hiking, and cycling and loves nothing more than her backpack. Follow her travels around the world at Jessie on a Journey and Epicure & Culture. Her trip was sponsored by the South Australian Tourism Commission.