This is the fourth installment of Alex Pollack’s experiences in Argentina. As he is now in his last week of language learning in Buenos Aires, he offers us a list of things he wishes he had known about life in Buenos Aires. Read parts one, two and three.

Blogger Jeff Barry calls Buenos Aires the “City of Faded Elegance.”  I think he’s onto something. 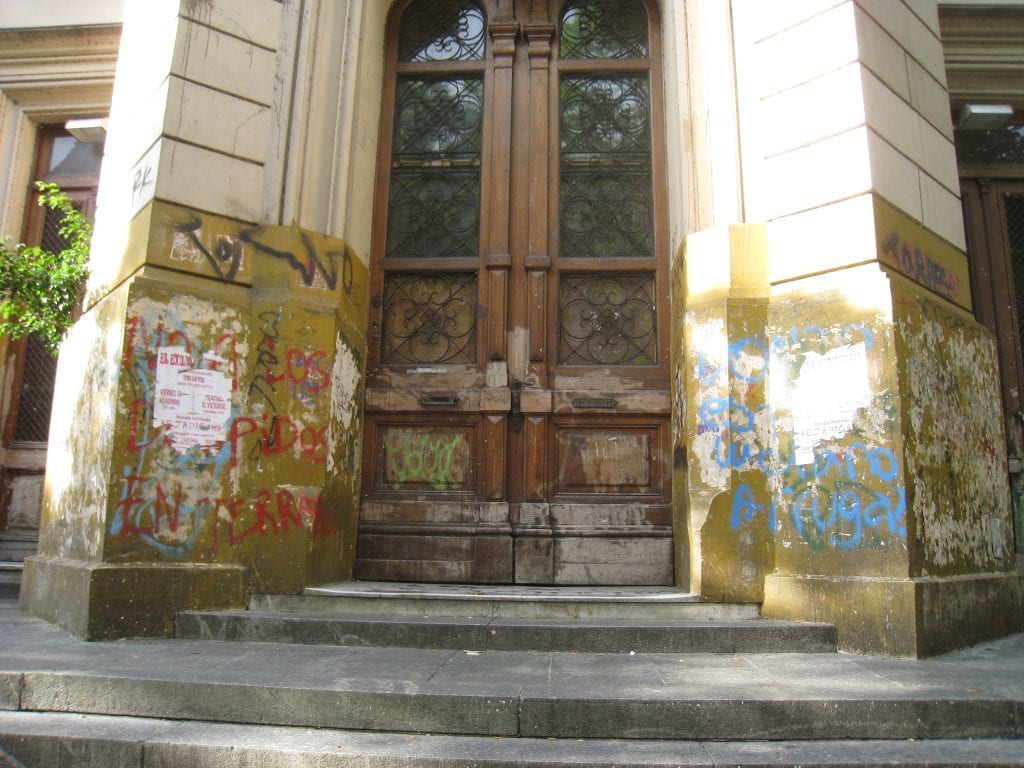 In the city there lies a tension: between respecting the classic European-style buildings and spray-painting them with graffiti.  The new melds into the old to create something neither modern nor antique, but rather, faded in elegance.

What follows is a list of nine things I would have liked to have known about life in Buenos Aires before I descended upon Argentina’s capital city.  (Feel free to add to this list in the comments.)

Watch out for big bills.

If you hand a cab driver a $100 peso bill (the equivalent of $26 U.S.), he will study it in the light as if it’s an Ocean’s Eleven diamond.  Make sure to follow his lead and do the same with your change.  One driver gave me a $20 Uruguayan peso, and I realized this minor league heist only when I offered the same bill to a bartender on Florida Street.  He shot me a disappointed whatchu-trying-to-pull look, and I fumbled to explain that no, I wasn’t trying to pull the wool over his eyes for the prize of a warm Corona.

If they ever make an Argentine version of the Grand Theft Auto video game, expect less shooting and hooking and more cracked-tile sidewalks with curls of dog waste. 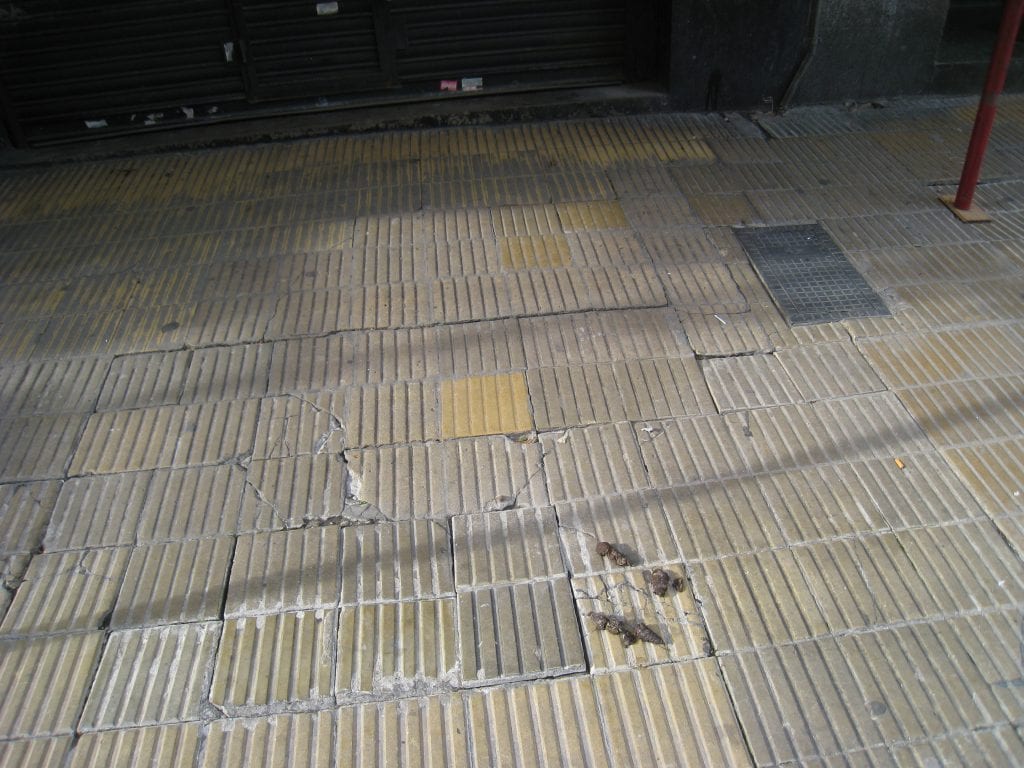 Beware of buses that speed up when they see pedestrians in the crosswalks, and parallel parkers who squeeze into tight spaces at lunch hour (One afternoon, I witnessed a guy get lightly clipped by a backing-up sedan.  Uninjured, the guy kept walking, cell phone to his ear.  He knows the game.  That is just life in Buenos Aires.)

To protect my victimized classmate’s identity, I’ve removed his face.

I met him on my birthday, at the precise moment this picture was snapped.  I’d known him before as only  “The German Guy Who Got His Ass Stabbed by a Crowbar and Almost Got Robbed.” “Almost,” because he reportedly fought off the Argentine teen/wannabe crook with martial arts.   “Does anybody not know about my ass?” he shouted to the surrounding circle of revelers when I told him I knew his reputation before I knew his name.

Two students from Expanish Spanish School were robbed; one at 2 in the afternoon.  Some people defend Buenos Aires and say this kind of stuff happens in every big city.  That may be true, but it was disconcerting to hear of two robberies and one buttocks assault within my first four days in Argentina.

One gray morning, I walked through the strangely empty streets of Retiro towards school.  I heard a voice maybe ten feet behind me: “Hombre, hombre, hombre.”  I was in my hoody so I pretended I couldn’t hear. There was nobody around.  It was raining.  “Hombre?  Hombre?”  As I approached a crosswalk, a cluster of other people appeared and I heard no more “Hombres.”  Perhaps this was more innocent than I imagined, but still, I felt lucky.

The general consensus is that robberies in Argentina are not chase-and-catch you affairs.  If you keep walking and try to stay within sight distance of other groups of people, you should be alright.  In other words, watch your ass.

Google “best steaks in the world” and you’ll find “steak Buenos Aires” listed under related searches.  It’s not just hype.  Go to a local parilla and you have a good shot at scoring a well-cooked, well-seasoned bife de lomo or chorizo for a little less than $10 US.  A good example can be found at Lo De Al on Viamonte.  The steak is a high point of life in Buenos Aires. 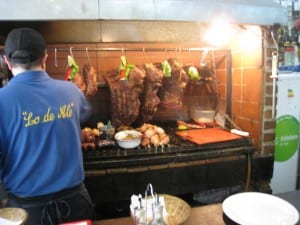 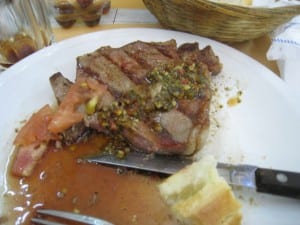 That splash of color you see is chimichurri, and in my experience, I’ve had to specifically ask for it to accompany my order.  Chimichurri adds a beady spicy-sweet swirl of parsley, garlic, oil,  vinegar, and red pepper flakes to an already solid steak. (And Argentina is not a spice-friendly country.  They like things bland here.  I’ve had the same luck finding spicy mustard here as I had finding the Tooth Fairy when I was a first grader.)  The juiciest, most tender steak I’ve eaten so far has been at La Trapiche, where the chorizo was more expensive but worth every succulent bite. 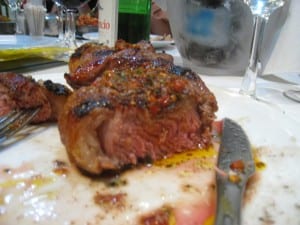 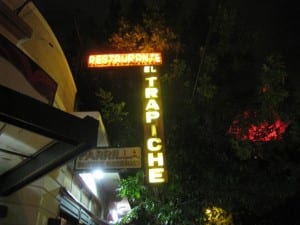 If you don’t like steak, you can try the omnipresent pastas, pizzas, or jamón. (Ham.  In the typical Buenos Aires restaurant, you’ll find dozens of variations of ham-based entrees.  This is the reason Babe 3 will not shoot in Buenos Aires. Ham is life in Buenos Aires.)

–      Don’t be flustered when you look at your receipt and see you’ve been charged a few pesos for cubierto.  That’s a sitting fee, and it’s common.  Don’t complain.  Just thank God you weren’t stabbed in the ass.

–    Ethnic food?  In Palermo, you can find Japanese and Mexican cuisine, among others.  I haven’t had the opportunity to try many of these eats, but to locate them I’ve had to rely more upon the Lonely Planet tell-me-where-to-go brand of travel rather than the friend-of-a-friend-wandering-and-finding kind.

5. It’s the holiday season, run for the coasts!

You’d think that with a population of about 13 million people, Buenos Aires would have restaurants open on Christmas or New Year’s Eve.  You’d be wrong.  The tendency among Argentines with the means is to flee the city for the holidays and vacation in Punta Del Este, Uruguay or Mar del Plata.  For those left behind, Buenos Aires is practically a ghost town.  On New Year’s Eve, it took me twenty-five minutes to find a taxi and this was after a dinner of cheese and crackers. (For a restaurant I’d looked up, down and around Florida Street, one of the most bustling, tourist-friendly streets in the city, but even McDonald’s had shut its doors.  McDonald’s!  In fact, a cafe closer to my apartment had a sign in its window that said it would be closed through January 15.  I’ve heard of siesta, but this is insane. 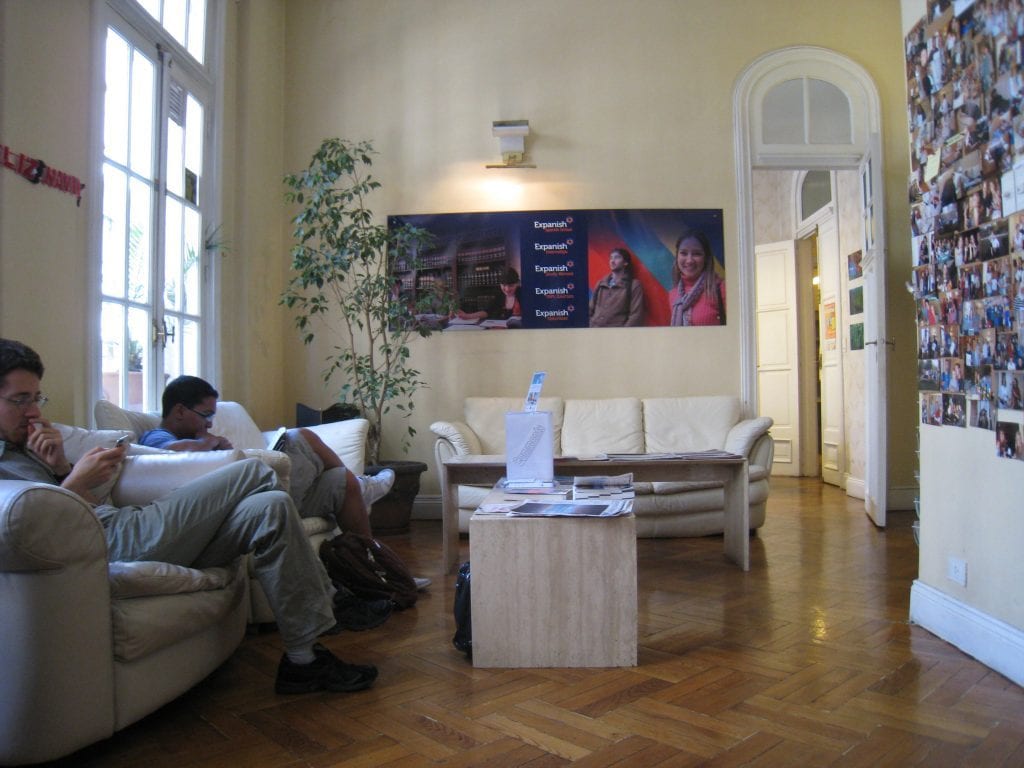 My teachers have been friendly and skilled at pointing out my conversational errors.  School hours are typically 9am-1pm Monday-Friday, with a few fifteen minute breaks in between to check e-mail or sip mate.  (For program costs, please check out the first post in my series.)  If you’re not wanting to spend money, you can still practice your Spanish through intercambio (language exchange with locals; if she wants to learn English and you want to learn Spanish, you two can meet for conversation practice where time is divided between both languages.) Conversationexchange.com is a great resource for intercambio.  Finally, watch tv!  It’s not the boob tube if you’re learning Spanish through the subtitles of Austin Powers in Goldmember.  (For the record, “shagadelic” does not translate.)

Bring your cell phone from home.  You might be able to use it in Argentina with the help of a SIM card you can buy for 10 pesos from an easy-to-find Claro cell phone shop.  If you have an address, Google Maps can help you get around. Know that you might get lost when streets change names and Google doesn’t tell you. (Then again, I’m notorious for getting lost, so maybe you won’t run into problems if you’re savvier than I am.)

8. Beware of the flip-flopping seasons

Argentina is in the Southern Hemisphere, where down is up and right is left and winter is summer.  Study the temperatures before you visit, because it’s not enough for someone to tell you Buenos Aires is “cool” or “kind of warm.”  That vague talk led me to wasting space in my luggage with a leather jacket I’ll never have to wear in an Argentine summer.  (Whether I should be wearing a leather jacket in the first place is another issue altogether.)  Speaking of summer, air conditioning is sporadic in Buenos Aires, to the point where a taxi or a restaurant that does have it proudly advertises as much on its windows.   (The fan store?  Closed for the holidays.  Did I mention siesta?)

9. Learn to Love the Love

Argentines aren’t just passionate about the tango.  They’re passionate about making out.  Hard.  In public.  I’m talking tongue-on-tongue action on busy street corners and in cafe lines.  My British friend Mark put this phenomenon into perspective as we watched a couple getting hot and heavy at the crosswalk.  “It’s like a desperation,” he said,  “survival by loving each other when the city’s old and falling apart in the background.”  Faded elegance indeed. 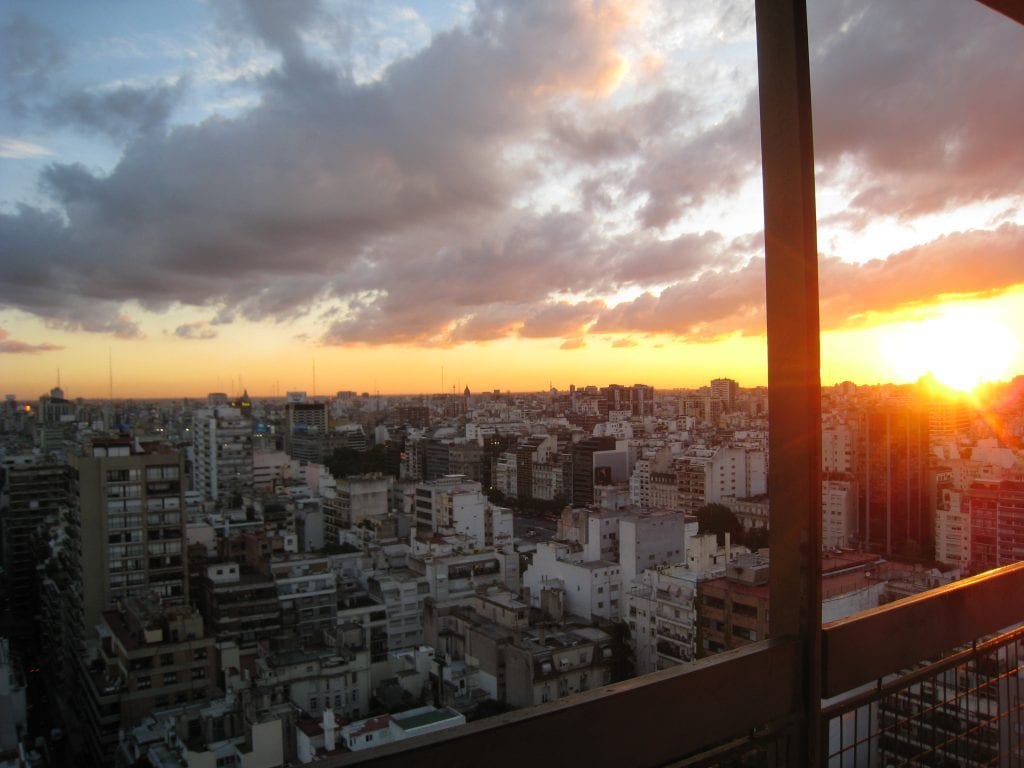 Do you have any other tips for life in Buenos Aires?

Heading to Buenos Aires and Need a Place to Lay Your Head?

Loará’s Hostel is a cozy hostel in the antiques’ district, San Telmo.  Enjoy complimentary breakfast and relax in the commons area and take advantage of the BBQ area and free tango classes!

Located in trendy Palermo, the Vitrum Hotel is a modern, colorful and chic spot to stay in Buenos Aires.  After a day of sightseeing relax and unwind at the spa or in the pool.

In the upscale neighborhood of Recoleta is the Cyan Recoleta Hotel.  This modern hotel features stylish rooms with plasma TVs and a buffet breakfast. 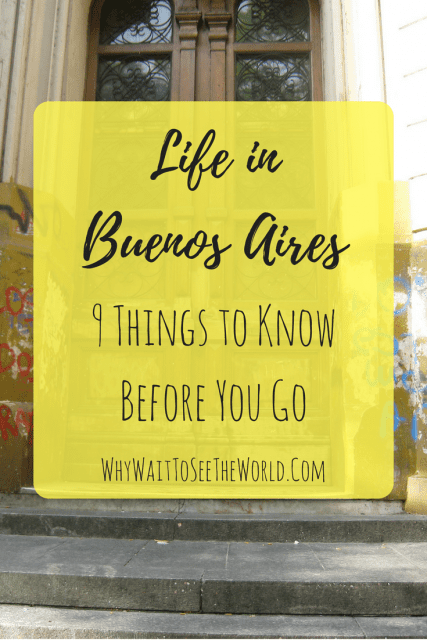 28 thoughts on “Life in Buenos Aires: 9 Things to Know Before You Go”