So I’m headed to London later this week, my favorite city on the planet if you haven’t been paying attention. I just can’t get enough of it. This will actually be my third Thanksgiving in England- at this point turkey curry seems more natural to me than roasted turkey. Sadly I will only be there for 5 days, but I hope to make the most of my time across the pond. To celebrate getting to use my passport again, I’m going to dedicate this week to highlighting some of the places and characteristics of London that keep me coming back.

There are a lot of reasons I love London but the omnipresent sense of history is a big part. I wrote the following on my blog while I was living and working in London and I wanted to reprint it here to illustrate the timelessness of the place: 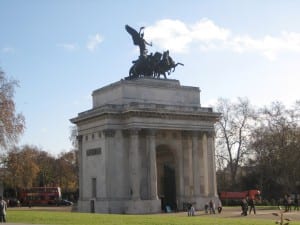 I almost missed my stop on the tube this morning because I was so engrossed in my novel. Isn’t that just the most exhilarating, when you absolutely cannot put a book down? Right now the novel distracting me is Atonement by Ian McEwan. I haven’t seen the movie, which was just nominated for an Oscar, but if it’s at all reflective of the book then it’s probably brilliant. I am cheating on my London Novel Project just a bit, 2/3 of this novel takes place in Surrey and on the battlefields of France, but it’s the part that does take part in London, a wartime London right before the blitz, that captivated me.

Living in a place that is so old, rambling and vast, I am constantly reminded of different, earlier versions of the city. I’m talking about tangible relics of the past, The Tower of London is a short squat reminder of medieval power, the architecture of train stations gleam with Victorian ingenuity, and everywhere around the city there are simple memorials and reminders of London during the Great Wars.

Today on my way to work I thought about how exhilarating and terrifying it must have been to be a part of that. Of course Americans made plenty of sacrifices during WWII, but we also had two oceans to cushion us from the immediate danger. It’s strange to think that while we were planting Victory Gardens and holding war rallies, London was 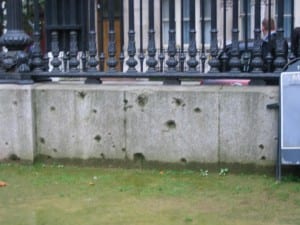 actually under attack. Children shipped out to the countryside, people carrying gas masks everywhere like handbags, and the constant lurking fear of the German forces amassing just on the other side of the channel. The rationing, the blackouts, the actual shelling. I’m not a war history buff, I’m just an imaginative romantic, and it’s strange to imagine what it must have been like to walk these streets I walk everyday.

There are concrete reminders of destruction all around the city. The gates of the British Museum are speckled with pockmarks from some long ago shrapnel. Other buildings were wiped out completely. At Christie’s orientation I learned that shelling decimated the main company building on King Street, which was then rebuilt using the exact same, incidentally completely illogical, blueprints (go figure).

And of course the memorials. London loves it’s monuments even more then Washington DC does. It makes sense when you have so many momentous things to be reminded of. Every train station, public building and business that existed before 1945 is bound to have a plaque commemorating employees killed during the war. Larger monuments commemorating both World Wars are spread all over the city. On Remembrance Day they are blanketed in wreaths of red paper poppies. Nobody will be forgetting any time soon. Sometimes I think of the history of London like a play, a really long play with many different acts. They build on each other. The city is over a thousand years old; it’s been through quite a lot. Often times at home I think history is easily ignored, but here it is a constant presence, because it’s such an integral part of London’s personality and being. Obviously you can never go back and relive the past, but in London, the past is a constant part of living, and that’s the next best thing.