How often do you travel with your parents? I haven’t done it very often since I reached adulthood, but I’ve been trying to take the opportunity to travel with my parents more often lately. Back in March my Mom and I went to Boston together, and it went so well, I decided to take her on a Princess cruise to Alaska in August.

Neither of us had ever been on a cruise before, and neither of us had been to this part of Alaska. I thought we had a pretty good time, but I wanted her opinion as well. I sent her some questions, then answered them myself (without peaking at her answers first). Here is an uncensored look at what we both thought of our Alaska cruise:

Favorite Moment of the Trip: 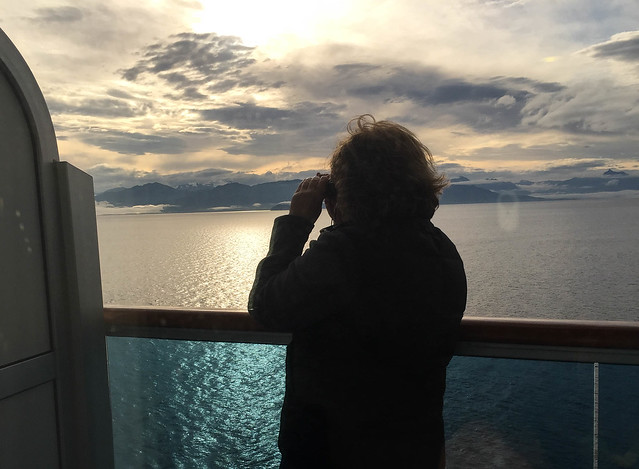 The first morning we were on board, we woke up at 6 am to watch a super pod of humpback whales swimming alongside the ship. The sun was just rising and the water was sparkling and golden. Everywhere you looked there was a tail flipping up or a blowhole spouting.

I saw humpbacks in Hawaii in February, but not nearly as many, and not all at once. It felt special to see them with my Mom, who as clearly really excited.  It was a wonderful start to our adventure.

Sitting poolside at the very back of the ship at sunset, wrapped in blankets, drinking hot chocolate and watching the beautiful Alaskan sunset while a young folk-rock singer serenaded as we cruised along. The sky colors were gorgeous, the surrounding landscape dramatic and the sea calm and serene. It was peaceful and magical. 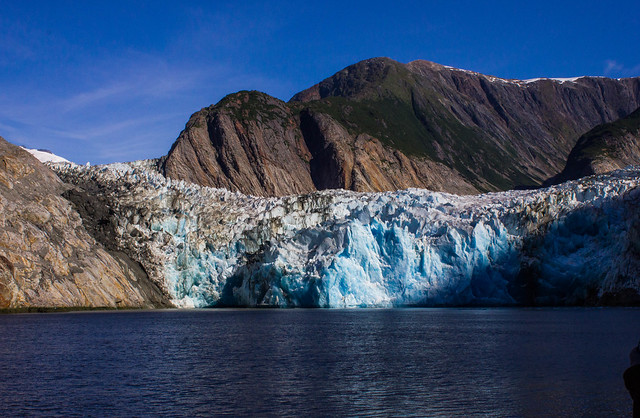 Definitely Ketchikan.  It was rainy and chilly the morning we were there but I was still enchanted by the cute little shops, the super-friendly locals and the interesting history (spoiler: it was heavy on the prostitution). My Mom befriended some locals at a little coffee shop and we ended up chatting to them about what it’s like to live in Alaska, which put a more personal spin on the twon.I found myself wishing we had more time to spend there. Of all the places we visited this is the one I would go back to.

Not actually a port, but the best stop for me was the breathtaking excursion through the glacial Tracy Arm Fjord and to the twin Sawyer Glaciers. The Crown Princess anchored at the mouth of the fjord very early in the morning – 6:30 am! From the ship, a smaller group of us boarded a high-speed catamaran for a tour beneath the high cliffs and glaciers, past many waterfalls and skirting innumerous blue icebergs as we cruised by. The catamaran was able to take us right up to the amazing South Sawyer glacier. We were blessed with beautiful weather and a cloudless sky, which allowed us beautiful views throughout the icy fjord. Just spectacular.

The Biggest Surprise about Cruising: 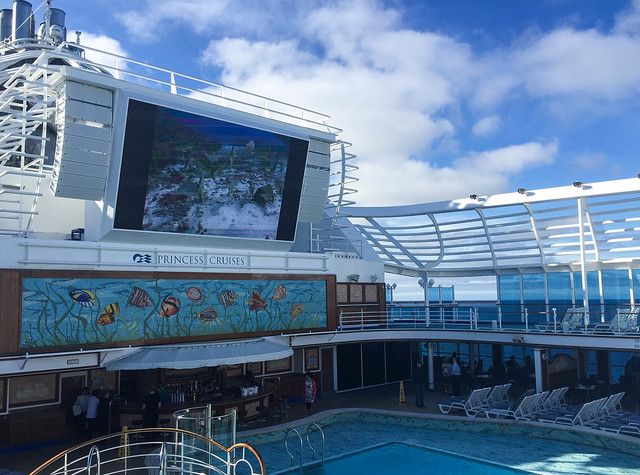 I think the biggest surprise for me was that a boat that huge could be so well organized. There were thousands of people on board, but you would never know it because the staff wrangled them so well. We barely ever had to wait in line, whether we were boarding, disembarking, eating or something else. The staff were all kind, professional and on top of things. This was my first cruise so I’m not sure if that is common or if Princess just rocked the customer service.

The number of family groups taking the cruise together – from mothers and daughters (like Steph and me) to 3 and sometimes 4 generations per family. The first person we met on the cruise was a young businessperson in his late twenties traveling with his father and stepmother; after that, there were countless families with grandparents, parents with children from babies to teen-agers. And many were repeat cruisers.

Also, despite watching The Love Boat many, many years ago, I was surprised by the size of these ships. Ours accommodated over 3000 people – passengers and crew. But somehow, as we went through our day, we never felt crowded, and we hardly had to wait long for anything.

How was traveling with your Mom/Daughter? 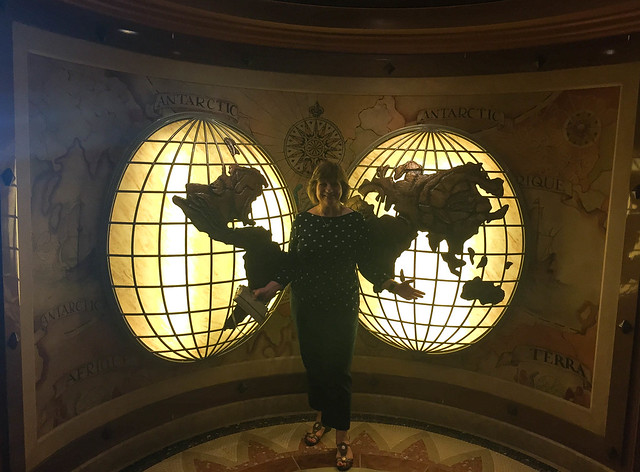 It was fun! I honestly wasn’t that worried about it because my Mom and I get along very well, but I could see how staying in such close quarters might be hard for some people. We had a really good time exploring the boat, drinking cocktails and on the day trips we did. I was really happy that I could treat her to an experience like this after everything she’s done for me.

I also think cruising is very good for family travel because people can go do their own thing when they want to, and then meet up later. We would split up for the afternoon and then get together at dinner to talk about what we’d seen and done.

Stephie, is this a trick question? Seriously, it was great. It was a real treat to experience Alaska and cruising with one of my favorite people. We like to do many of the same things which made it nice, but being on the ship made it easy do interesting activities on our own—so I don’t think we got on each other’s nerves much. And together, we made sure to sample the variety of martinis offered at the Crooner’s Lounge (our favorite) where we got along just swell!

Favorite Thing You Ate All Week?

The food on the ship was all quite good, although not necessarily noteworthy. I did enjoy the Crown Grill, one of the specialty restaurants on the ship. We ate their twice and both times I had a terrific meal: perfect steak, lamb chops, amazing asparagus and more.

I also really enjoyed the extensive martini menu at the Crooner’s Lounge. It was fun to try some new cocktails!

Salmon, salmon, and salmon. I figured this was the freshest, most delicious salmon I’d ever have access to, so I made the most of it. Seeing them energetically swimming in the clear streams of all our port stops did not dampen my enthusiasm.

(Editors note: now you see where I get it from)

Biggest Regret/What Would You Have Done Differently? 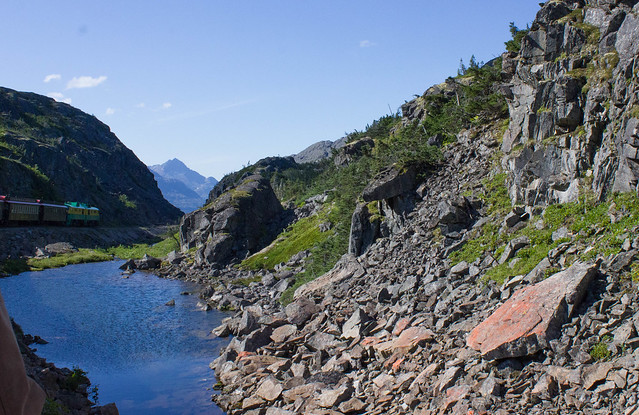 I was pretty happy with our trip, but I would have liked time to see more of Alaska. It’s such an enormous place and we really only saw a fraction of it. I think I would rather take a cruise starting from Victoria or Anchorage instead of Seattle, to cut down on the amount of time spent at sea and maximize sightseeing.

It’s hard to have any regrets about seeing Alaska for the first time on such a wonderful trip. If I could do something differently, it would be to add an overland extension to the cruise to visit Denali National Park and to see more of the inland wilderness. So I guess I have an excellent reason to go back. 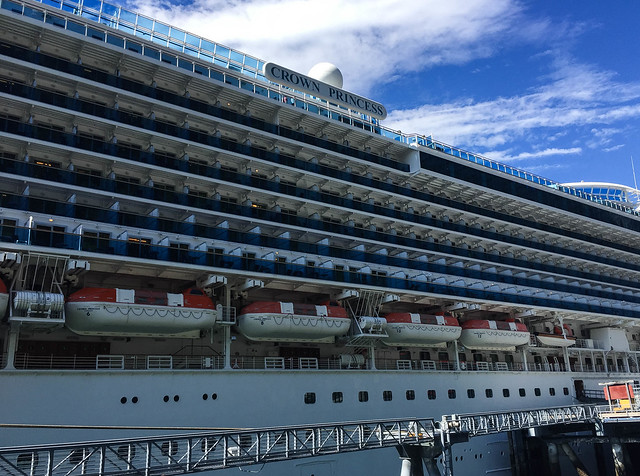 Dress in layers at all times! In general the weather was a lot warmer than we expected (thanks global warming) but there were a lot of days I would start out with a sweater and end up in a tank top by 11 am.

There is a lot of hanging around on the boat time so bring a good book as well.

Get off the ship and explore each port (beyond the cruise-line owned shops at the docks), whether it’s on an organized excursion or on your own. We had the best time talking to locals and learned many interesting things (like the truth about that “bridge to nowhere”).

And the advice to “dress in layers” is spot on during the Alaska summer.

Would you go back to Alaska? 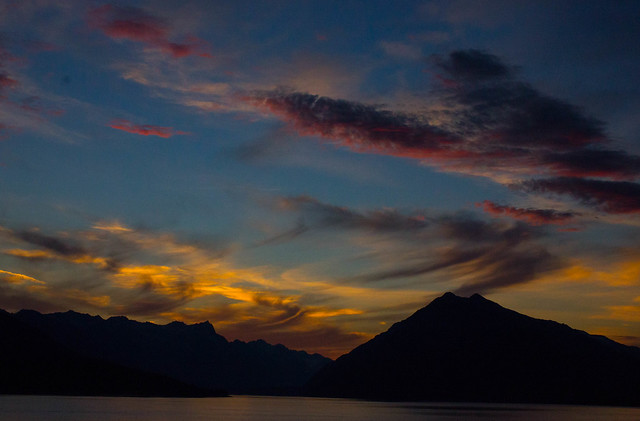 Definitely! I’d like to get out in the wilderness a bit more, maybe visit Denali, or head further up north. It’s such an absurdly beautiful part of the US and well worth exploring.

Absolutely. See above about Denali.

Disclosure: Our trip to Alaska was sponsored by Princess Cruises. All opinions are my own (and my mother’s).

7 thoughts on “Mom Vs Daughter: What was our Trip to Alaska Really Like?”