Welcome to our ongoing series: How Much Does it Cost to Travel?

Today’s budget is from Alouise Dittrick of Take Me To The World. 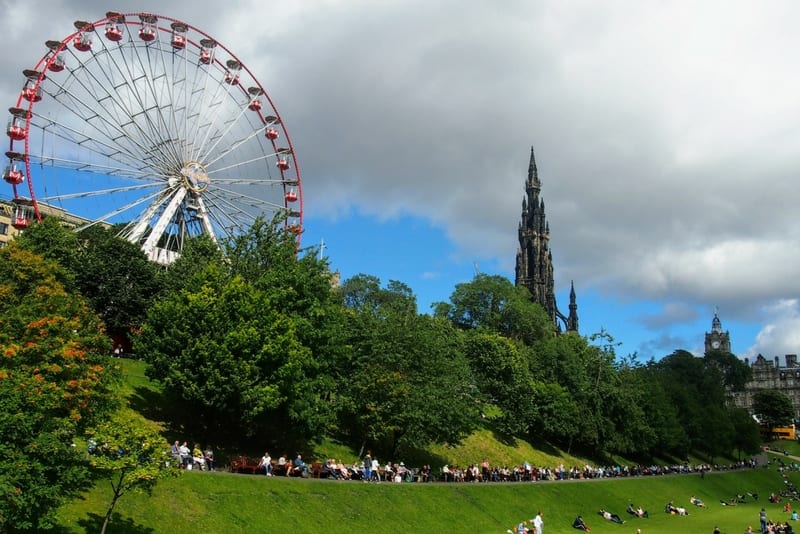 I went to Edinburgh, Scotland in August during The Fringe Festival for 3 nights/4 days.

I’ve always wanted to visit the Edinburgh Fringe Festival so I came in August for that. I went to several Fringe shows and visited a few sites like Edinburgh Castle. Most of my time was spent in the Old Town part of Edinburgh.

Coming from Dublin, Ireland the trip was $368.19 for one person.

Broken down that is

Other Costs (souvenirs and buying some toothbrush covers because mine broke) – $5.51 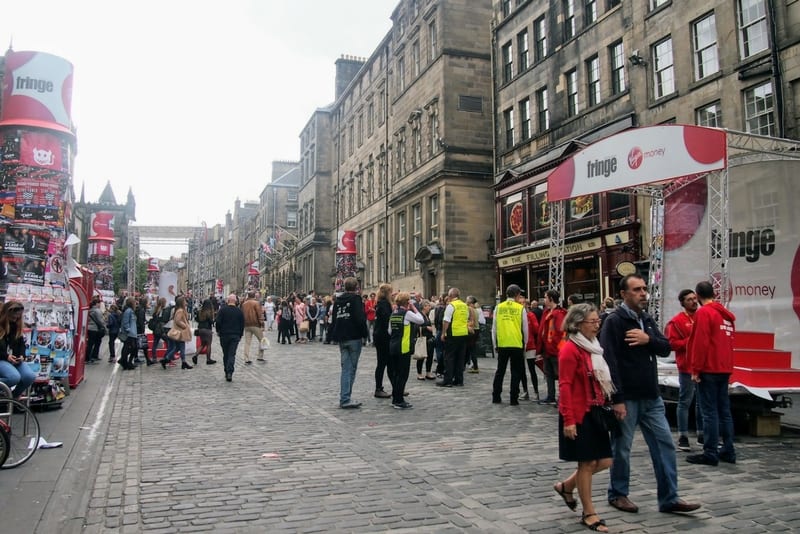 I spent $61.56 in total on transportation. I flew on Ryanair from Dublin (where I live) for $51.94. Ryanair is a no-frills budget airline where the base price of the ticket doesn’t include any extras (you pay for selecting a specific seat, checking a bag, etc.). I took carry-on only and let Ryanair randomly assign me a seat to save money (I got the middle seat both times). The flight is less an hour one-way so I felt it was worth saving that bit of money.

The only other transportation expense I had was my round trip bus ticket from the airport to the city. This cost me $9.62. My accommodation was in a central location so the rest of the time I walked. During The Fringe Festival the streets are packed with people, so I think walking would probably have been faster than trying to get a cab or bus somewhere.

I stayed in a 6 bed mixed dorm room at the Castle Rock Hostel. It’s within a 5-minute walk to Edinburgh Castle. There are plenty of accommodation options in Edinburgh, but if you’re planning to visit in August while the Festivals are on you’ll want to book several months in advance. I originally tried to book a 4-bed dorm, but it wasn’t available for all the days I was there. The 6-bed dorm worked out great.

The main reason for my visit was to see some Fringe shows. While I live in Dublin, Ireland I’m actually from Edmonton, Canada, and that Fringe Festival is the 2nd biggest in the world after Edinburgh. I love going to the Fringe Festival in Edmonton, so I knew when I moved to Dublin I’d want to go to Edinburgh in August for their Fringe.

Of course, I also wanted to see other parts of Edinburgh as well, so I visited a few museums, went to Edinburgh Castle, and walked around Old Town. On my last morning I went on a great 3 hour free walking tour (they don’t ask for donations or tips at the end) with the Edinburgh Festival Voluntary Guides. The only downside is their walking tours only run during The Fringe, but it was great (led by a local writer who was a history teacher) and there were only 7 people on the tour, which I loved.

I splurged on going to Edinburgh Castle. Admission is $21.76 for an adult, which is quite steep. That said Edinburg Castle is quite big, with several buildings and museums to check out. I spent about 4 hours there, and I feel like I got my money’s worth.

I also splurged on seeing Fringe Shows, but “splurge” is a bit of a misnomer because the most expensive ticket I got was $14.47. There are lots of shows that are free to enter and then you pay what you feel the show is worth. There are also buskers out on the street where you can leave a tip at the end of the performance. There’s a ticket booth where you can get half-priced tickets for shows that day.  I saw ten shows (including 2 busker performances) and only spent $49.10.

It’s also worth mentioning The Fringe is a huge festival, and it doesn’t just include theatre shows. There are art exhibits on for free during The Fringe (also part of the Edinburgh Arts Festival). I also saw several walking tours listed as shows. My first Fringe Festival “show” was actually an underground walking tour (and it was half price too). Even if you’re not a theater geek like me there’ll be something on at The Fringe that’s worth checking out. 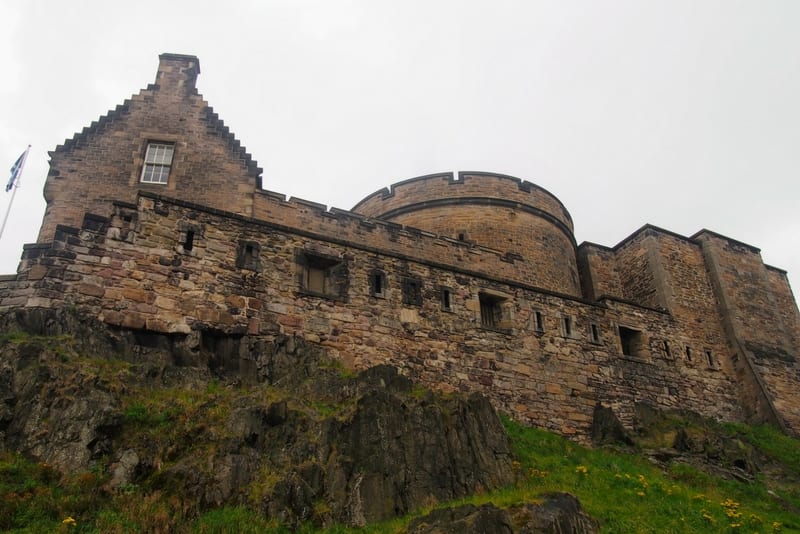 Aside from visiting Edinburgh Castle and the Fringe shows, I saw all the other attractions I went to were free. There are a lot of free museums I visited like Writer’s Museum, the Museum of Childhood, the Museum on the Mound (about banking in Scotland), and the Music Museum (just to name a few). Since my main purpose was to go to The Fringe Festival I’m happy I was able to balance that cost out with the free museums.

I’m not one to buy many souvenirs, but I bought a few postcards to send to my younger cousin. I did buy some Scottish tablets (a type of candy made with sugar, condensed milk, and butter) as a souvenir. I tried one at my hostel, and the small bag of tablets was gone before I left Edinburgh (they were really good). Luckily I found recipes for this candy online, so I can recreate this souvenir at home if I want.

I’ve been working at a pub outside of Dublin for the last 8 months, and have been putting away $25-$50/week in an account for travel. I used some of this money, and money I made from freelance writing for this trip.

My flights were booked and paid for back in May, and my accommodation was booked (not paid for) then as well. In my savings (mostly for travel) account I had about $600, but in July I ended up having to move to a new residence in Dublin. If you haven’t lived in Dublin finding a place to live can be challenging and expensive. Unfortunately, I had to use about 2/3 of my travel account money toward my security deposit on my new place. Since there was less money for this trip than I had anticipated I balanced out the paid activities and shows with some free activities. If I had more money I may have considered doing a day trip outside Edinburgh, but I’m happy with what I got to see and do on this trip.

During The Fringe Festival, The Royal Military Edinburgh Tattoo was on as well. It wasn’t something I planned to see, but one night after the Tattoo I stood on Johnston Terrace and watched the performers march down after the show playing the drums and bagpipes. Seeing just that made me wish I had gotten a ticket for The Tattoo (it had been sold out for weeks). If I go back to Edinburgh during The Tattoo I would buy a ticket for that in advance.

My hostel did have a kitchen and breakfast (which was not included but was about $2/day). I could have saved a bit of money on food and drink if I had breakfast at the hostel, and bought groceries and made some of my own meals. Next time I’d probably balance having some meals at the hostel and some meals out (because I don’t just want to only eat cheap hostel made spaghetti when I travel).

On my last evening in Edinburgh, I mistakenly bought tickets for two Fringe shows starting only 10 minutes apart. Fringe tickets are non-refundable (something I knew when I bought the tickets), which meant I was only able to see one show. I went to the lobby of my hostel with the ticket I wasn’t going to use and told the workers that there was a free Fringe ticket if anyone was interested. It was a stupid mistake to make, but I just considered the price a small donation to the performing arts. Hopefully, someone was able to make use of the ticket.

That said I really love Edinburgh and my visit there. It was great to see the city during The Fringe Festival, but I’d also love to go back at another time of the year. There is a lot of Edinburgh I didn’t get to see and I’m already looking forward to my next visit there. 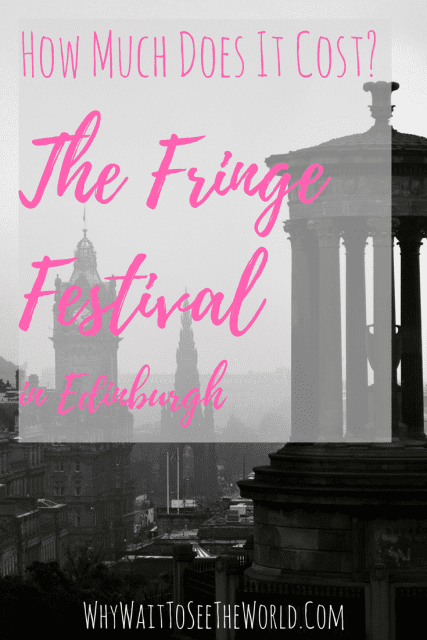 3 thoughts on “How Much Does it Cost to Travel? The Fringe Festival in Edinburgh”