Today’s budget is from Jo who blogs at Indiana Jo on her Mexico road trip.

On a 10-day Mexico road trip down Baja California.

Briefly, what was your itinerary for your Mexico Road Trip?

I crossed the border by foot from San Diego in California to Tijuana where I picked up a rental car. I stopped at Ensenada, Guerrero Negro, Loreto, La Paz, Todos Santos, and Los Cabos.

Broken down the costs were:

This was a road trip so the car hire and fuel were pretty big costs in addition to the price of flights. Altogether, transport accounted for over half of my spend. There is a bus that makes the same journey and would cost less but I wouldn’t have been able to stop at roadside taco stands on a whim or turn back for a good photo which was what I wanted out of my Mexico road trip.

I mainly stayed in budget hotels, which averaged out around $40 a night. Comic-Con was on in San Diego the day I arrived, sending room rates through the roof. So, I crossed the border to Tijuana earlier than expected. As I was booking last minute, I ended up in a dorm for $18 a night but it turned out to be an amazing price considering the hostel was opposite the beach.

In Todos Santos, I splashed out on a night at Hotel California ($105 a night), which some fans claim was the inspiration behind the Eagles song of the same name. The hotel and the band both deny it but that hasn’t stopped the place gaining cult popularity. Regardless, it was a fun evening and a nice upgrade to the roadside hotels I’d become used to.

For a couple of days, it felt like I did nothing but drive – there are very long stretches between northern Baja and southern Baja where all you see is cacti and desert for hours at a time.

In Ensenada, I went wine tasting and discovered that Mexico produces some wines that can rival those in Sonoma.

And in La Paz, I took a boat trip out to Espiritu Santo – a beautiful island in the Sea of Cortez. You’re going to struggle to find that shade of turquoise anywhere else. And there’s also the chance to swim with sea lions.

It’s hard to splurge in Mexico where most things are pretty affordable – you can eat tacos and drink beer for a couple of dollars. I also had a few more formal dinners. Being by the ocean, there’s a lot of fresh fish on offer and I never regretted a single peso spent on freshly cooked food. Hotel California was a bit of a splurge and absolutely worth it.

A few nights I saved money buying a few beers and snack and sitting on the beach to watch the sunset instead of sitting in a bar. The scrimping was secondary to wanting to sit on the sand and watch the ocean but it was also a great way of saving on bar prices.

Did you purchase any special souvenirs on your Mexico road trip?

Unless I can eat it or drink it, I don’t tend to shop for souvenirs. I dislike shopping and as someone who packs under 10kg, I dislike the extra weight even more.

I did, however, stumble across an excellent bottle of Tequila during a tasting in Ensenada. The full-size bottle was $60, but I opted for the half-size bottle for $35 instead. The bottle may have gotten lighter each day!

I’m always collecting air miles. We still have horrendous flight taxes to pay in the UK and we don’t get the deals on offer in the USA but it still allows me to fly with better airlines and occasionally upgrade my seat.

Apart from that, I have a constant ‘travel fund’ mentality. Whenever I think about buying something (a meal out or something for my apartment), I think whether I want it more than my next trip. Usually, I don’t.

I don’t usually travel for such a short amount of time. By traveling for longer, those transatlantic flights give better value for money. I also should have researched the car hire better to avoid those extra costs and insurances that they seem to trick you into when you pick up the rental.

Anything else to add about your Mexico road trip?

I’d underestimated the driving time. Google Maps is great at giving distances and realistic driving times but winding roads with trucks to constantly overtake, is exhausting and sitting in a car for 8 hours for a couple of days wasn’t as fun as it sounded in my head. The middle half of the trip felt rushed and, in hindsight, I’d have liked at least a few more days to enjoy southern Baja. Because who wouldn’t want to see more of those sunsets. 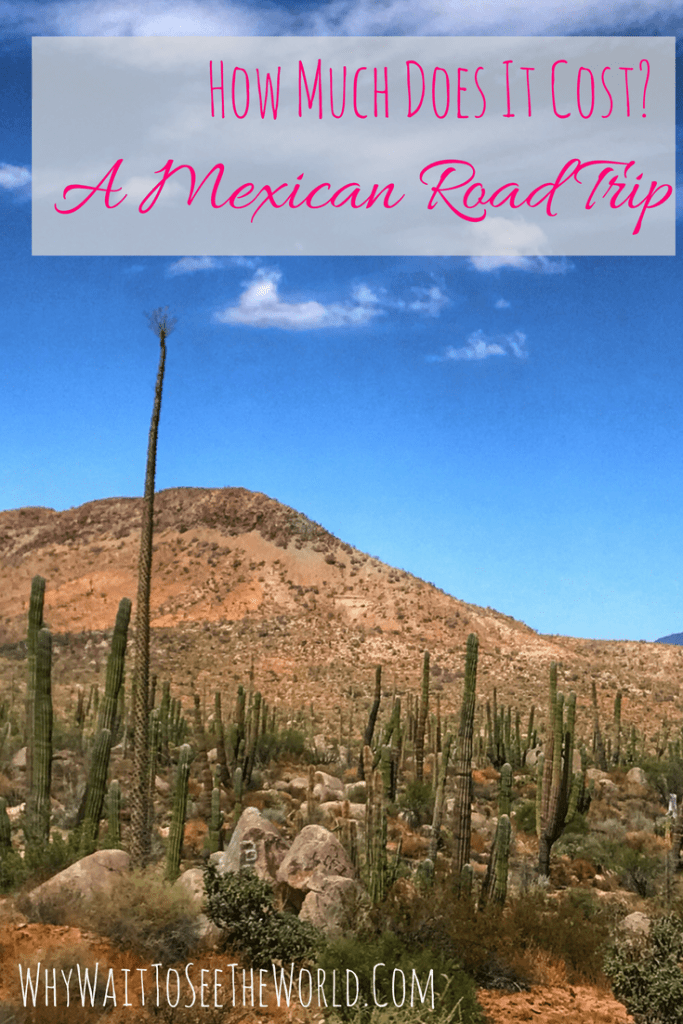 3 thoughts on “Mexico Road Trip – How Much It Costs”