Welcome to our ongoing series: How Much Does it Cost to Travel?

If you’re interested in contributing to this series please send me an email using thecontact form on the site.

Today’s budget is from Chris and Tawny of Captain and Clark. 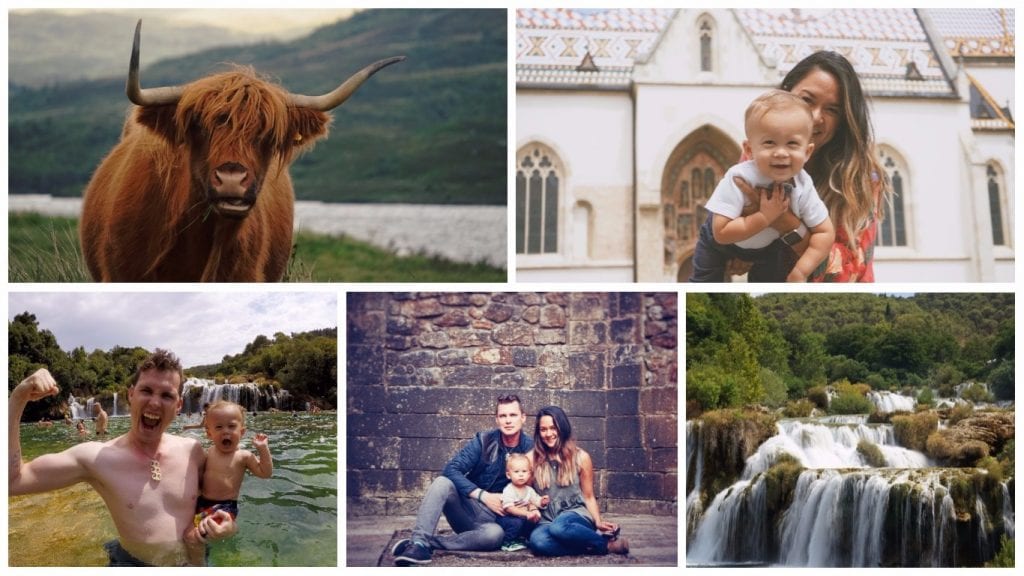 This summer we traveled to Scotland and Croatia (with a day trip to Slovenia and Austria).

We actually flew to Scotland to semi-crash our friends’ honeymoon. They invited us to join them but the jury’s still out on if they really meant it or not. Luckily, it seemed like everyone enjoyed themselves.

Chris, Holden, and I flew from Seattle to New York (where we had a day-long layover) and then on to Aberdeen, Scotland. We spent ten days in Scotland hanging out with the newlyweds, seeing the sights, and meeting up with a few friends from our days living in South Korea.

From Scotland, we flew to Dubrovnik. We had a few days to explore, adjust, and pretend like we were in Kings Landing. We then hopped on another flight to Zagreb, the capital of Croatia. We met up with one of Chris’ younger brothers (it was his first time out of the U.S.) and spent a week showing him around the country.

After Chris’ brother left, we had a week to kill. We spent that time wandering (and let’s get real–eating) around Zagreb. We also rented a car for a day and drove to Slovenia. We had been once before but this trip we wanted to visit Lake Bled. As soon as we realized how close Austria was, we decided that dinner was going to be had in the Austrian town of Villach.

Chris and I have accumulated a fair amount of airline miles and we were eager to put them to use. We used miles to book our airfare from NYC to Aberdeen. We also used miles to fly home from Zagreb. Unfortunately, by the time we booked, all of the economy seats were taken and we ended up spending 50,000 miles each to fly back in business class (fanch schmancy). We still had to pay taxes for our flights and that came to roughly $456 a piece ($930 total).

Since we each have an Alaska Airlines credit card, both of us get a BOGO ticket every year. We used Chris’ to book our tickets from Seattle to New York. I believe we spent $400 total for the two of us. Flying from Glasgow to Dubrovnik was another $600 total and our flights from Dubrovnik to Zagreb set us back about $250. If you add it all up, we spent $2,180 total for all of our flights. That’s not too shabby if you factor in that we flew BUSINESS CLASS from Zagreb to London to Los Angeles to Seattle.

But wait, there’s more. We have a child. And normally, lap infants fly free on domestic flights but that’s not the case for most international carriers. From my research, most airlines will charge 10% of your ticket price to have your child sit on your lap. It wouldn’t have been that big of a deal except for one minor detail. Even though we booked with miles, British Airways was going to charge us 10% of what it would have cost to book the flight. That includes the insane amount of money it costs to sit in business class. I was initially quoted $1,288 to have Holden fly as a lap infant. Fortunately, I was connected, disconnected, and reconnected with so many different customer service representatives from  British Airway that we ended up *only* spending $800 for Holden. 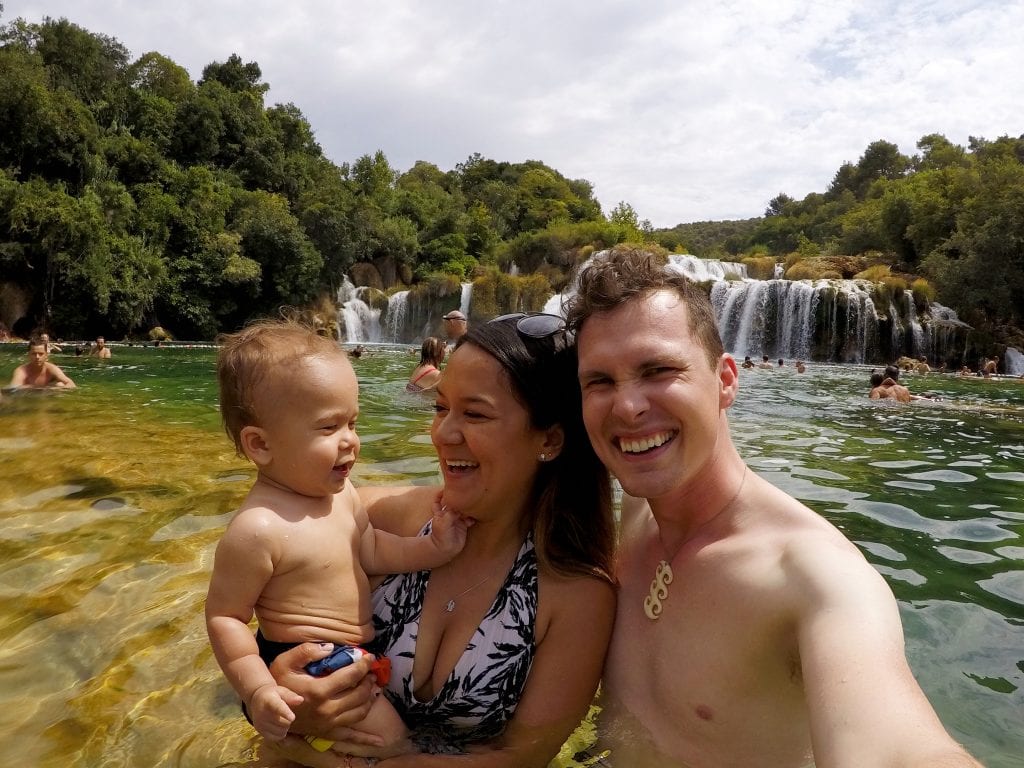 Not a ton. You know the friends whose honeymoon we crashed? Chris officiated their wedding and I was the photographer. They paid us back by paying for the rental car that we shared. So transportation in Scotland was basically free.

In Croatia, we rented a car for our three days in Dubrovnik, our week in Zagreb, and for a day during our road trip to Slovenia and Austria. If we include taxes, fees, gas, parking, and extra insurance (because we’re parents now and paranoid), it came to about $500 total.

In Scotland, we stayed in a hotel for our first night in Aberdeen. We then met up with the honeymooners and spent a night in an Airbnb in Dundee. Then, we spent an entire week at a condo near Loch Lomond, and then one night at a hotel in Glasgow before we flew out.

With the exception of one night in a hotel, our entire time in Croatia was spent at different Airbnbs. Truth be told, I loved it. There were two Airbnbs in particular that I could definitely live in. Chris and I have even talked about renting one for a few months so we can truly enjoy the country.

Since it was our first time in Scotland, we did a ton of sightseeing. We went to pubs, ate our fill of meat pies and haggis, explored castles, and wandered around Edinburgh and Glasgow.

This was our third time to Croatia (we love the place) and didn’t have a set itinerary. We knew that we wanted to visit Krka National Park for the first time. We also wanted to take Chris’ brother on a road trip from Zagreb to Zadar. The Museum of Broken Relationships was a must, as was eating all the delicious food. Overall, we had an amazing time. 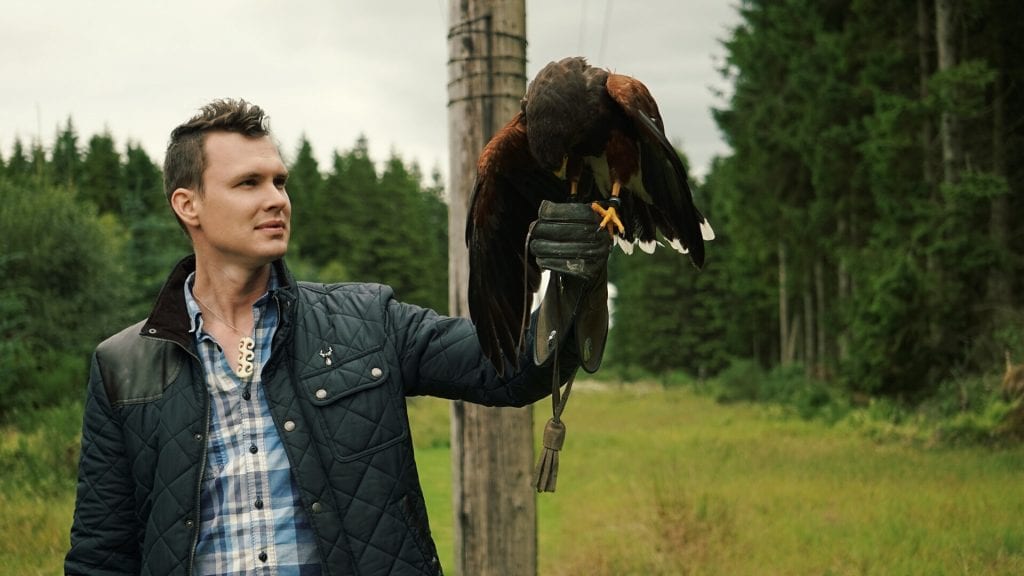 There was only one thing that Chris really wanted to do while we were in Scotland and it was hunt with a falcon. Unfortunately, hunting season isn’t until the late fall/winter so he had to settle for just hanging out with one. For $45, he spent an hour and a half with a Harris hawk. He helped train it to hunt while learning facts about these magnificent (and pretty terrifying) birds of prey. And if you ask him, it was worth every penny.

For me, our biggest splurge was on Krka National Park. The past two times we visited Croatia, it was during the fall. As autumn is a shoulder season, everything is exceptionally affordable. In the fall, Krka costs 30 kuna (roughly $5 USD) per person. However, since we were visiting during the high season, it was 180 kuna (nearly $30) per person. I nearly died. But the cascading waterfalls and cooling clear water was totally worth it. Plus, Holden had an absolute blast.

We were very careful with how we spent our money. We were on a tight budget and if we could do something on our own, we did. Croatia is pretty affordable (even in the high season) so we didn’t have to feel guilty about meals. Scotland, on the other hand, was pretty pricey. We ended up buying groceries and cooking our own breakfasts nearly every day we were there.

Some castles ended up charging a higher entrance fee than we were willing to pay. We chose a few of our favorites (Dunnottar was a must) to spend our precious pounds on while others we viewed from afar. 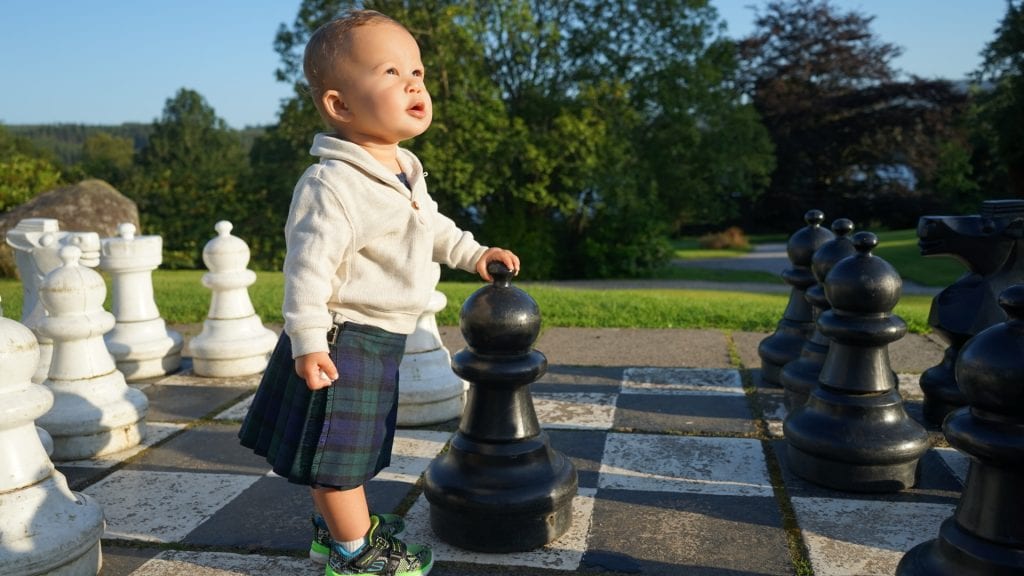 As we were in Scotland with a toddler, a baby kilt was an obvious necessity. We also came home with a bottle of medica (honey grappa) from Croatia. Aside from that, I think both Chris and I brought home a few new additions to our wardrobe. Ask Chris about his amazing thrift store find. He was so proud of himself.

Honestly, we didn’t really do anything special to save for this trip. Once we realized that having Holden as a lap infant was going to be an additional $800, we took on extra jobs at home. Chris also worked on a few additional projects before we left so that we’d have extra money in our pockets.

I honestly believe that if I would have planned it better (and didn’t leave it to the last minute), we could have saved hundreds of dollars on airfare. This trip was also the first time in a long time that we traveled in the summer. Chris and I typically travel in shoulder seasons and we experienced extreme sticker shock when we realized how expensive it is to travel in the summer. Plus, it was a little too crowded. If I were to do it again, I would book the same trip but in September or October.

1 thought on “How Much Does it Cost to Travel? Scotland and Croatia (with a baby!)”