Last week I told you guys about the unique phenomenon of the Chicago hot dog. Today I want to talk about something more well known, but far more controversial: Chicago-style pizza.

Or most specifically, my quest to try to love Chicago pizza.

Let me start out by reminding you that I love pizza. Pizza is probably my favorite food in the entire world. My tastes aren’t terribly discriminating either, I like it all: frozen pizza, take out pizza, authentic Italian pizza, home-made pizza. While my favorite style is probably real New York pizza, I’m of the firm opinion that there is no such thing as bad pizza.

So obviously I was mega-excited when Chicago Pizza Tours offered my the chance to sample their classic pizza tour. After all Chicago is a pizza town, and even if their tastes run a little… unorthodox, pizza is still pizza.

Actually, the Chicago Pizza Tour was really neat. Over the course of about 4 hours you visit four different pizza places (they have a revolving list, so the locations change depending on the day of the week), designed to showcase both traditional and innovative Chicago pizza trends. It’s a bus tour, so their range is much more expansive than a walking tour could be. While you drive across the city, a guide (we had Jonathan, who was wonderfully surly), tells you all about the history of both Chicago, and pizza. 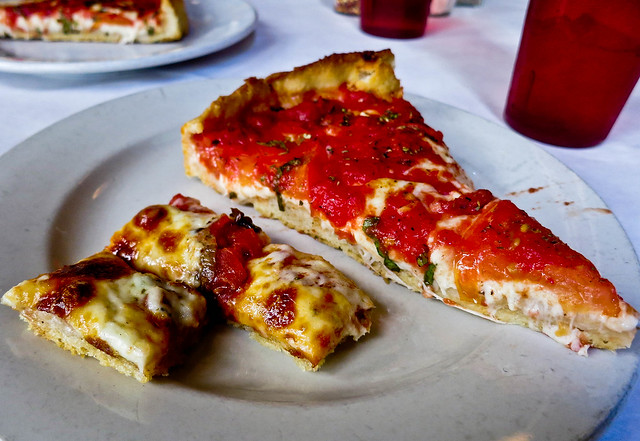 We started at around 11 am inside a classic Chicago-style pizzeria. Our tour group was surprisingly made up mostly of locals and semi-local midwesterners. My friend Cailin and I were the only ones without ties to the area (this is relevant later). It was here I learned about the complex, controversial history of Chicago Pizza.

In a nutshell: Chicago style pizza was invented in the 1940’s at the original Pizzeria Uno in downtown Chicago. The owner’s originally intended to open a Mexican restaurant but decided to try their hand at pizza instead. Only, they wanted something heartier than a traditional flatbread style pizza. Nobody can quite agree on who invented it but somehow Chicago-style pizza was born: a kind of franken-pizza with a thick crispy crust, an overabundance of tomato sauce and a heavy dependence on sausage.

At Pizano’s we tried three different pizzas: A traditional deep dish with Pizano’s signature buttery crust and two thin crust squares, one with sausage, one with mushrooms.

The thin crust slices were delicious: crispy with a crust that tasted just unhealthy enough to be totally crave-able. The deep dish however was too doughy for my tastes. Messy and slippery with an overabundance of sauce, the kind of pizza you need a knife and fork for. I went back for seconds on the thin sausage, but when it came to the deep dish, I could barely finish it. 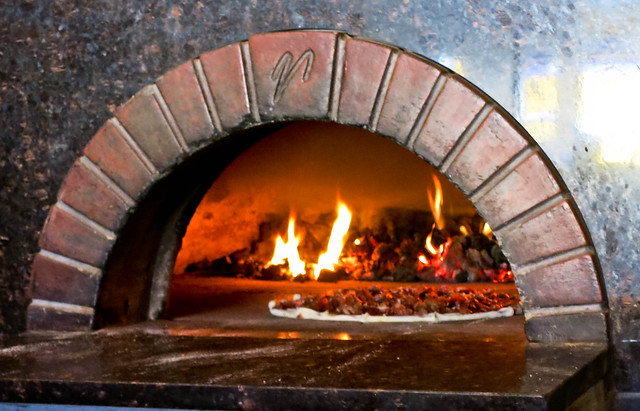 Our second stop was a departure from traditional Chicago pizza in favor of a new trend: coal-fired pizza. Owned by two guys from Massachusetts, Coal Fire Pizza focuses on the freshest local ingredients and thin crust pizzas fired in a piping hot oven (each pizza takes about 90 seconds to cook. We tried two pizzas here: a white pizza with mozzarella, garlic and basil and a pepperoni pie, both topped with dollops of freshly whipped ricotta.

It was amazing. Fresh and savory, crispy and flavorful.It reminded me of actual Italian pizza. I would eat here all the time if I lived in Chicago! 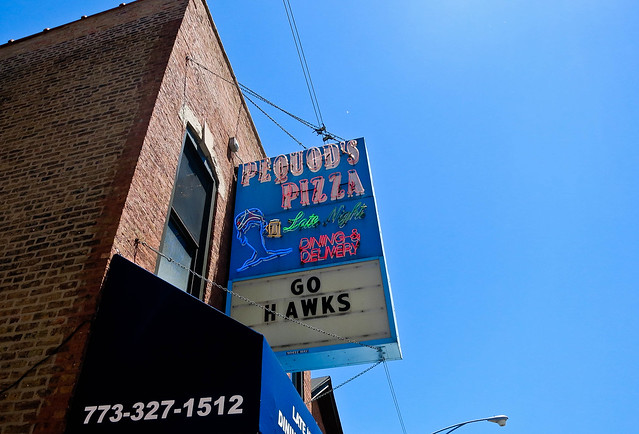 Then it was time for a second crack at Chicago-style pizza, this time at Pequods, widely known as one of the best deep dish spots in town. Several different Chicago natives told me I must try Pequod’s and that if I liked Chicago pizza anywhere, it would be here. 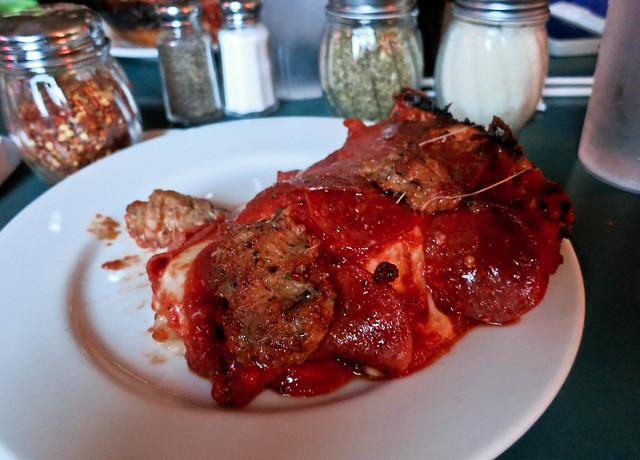 I didn’t like it. I actually liked it even less than the deep dish at Pizano’s. My slice was huge and misshapen, more bread than anything else. It was slippery and messy with tomato sauce everywhere. The “caramelized mozzarella crust” just tasted burnt to me. I didn’t even finish. 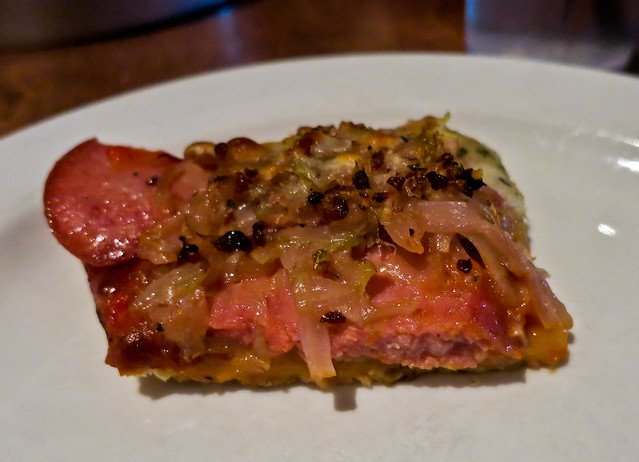 I don’t think I could handle another brick of deep dish, so I was pleased to find out that our last stop, Flo & Santos was something entirely different. An Italian-Polish fusion restaurant specializing in Chicago South Side tavern-style pizza. That’s right: there is more than one kind of chicago-style pizza! In fact, my informal poll of Chicagoans told me that most people here don’t even eat deep dish on a regular basis. Shocking!

South Side tavern-style pizza has a very thing, cracker-like base and essentially no crust to speak of. It’s like the opposite of deep dish pizza, and it really lets the ingredients shine. In this case we tried two different polish-inspired pizzas: the “Flo’s Polish” with kielbasa, saurkraut and smoked bacon and the Italian Beef, which was a spin on Chicago’s Italian beef sandwiches of shaved beef, caramelized onions, cheese and giardiniera- a relish of pickled vegetables. I loved the Italian Beef, it was spicy, crunchy and savory. This kind of pizza I can get on board with.

As the tour came to an end, Jonathan asked us to vote with our hands for our favorite stop of the day. Pizano’s was popular, as was Pequods. Cailin and I were the only ones to raise our hands for Coalhouse. Considering everyone else was local, we were definitely the weird ones.

Either way I left full and happy, although fully unimpressed with deep dish pizza. I can definitely recommend Chicago Pizza Tours for those who want a complete picture of the complec Chicago pizza scene.

As it turns out, I did get one last crack at deep dish nirvana while out with Mike’s colleagues from Woo. I wasn’t thrilled when I heard we were headed to Lou Malnati’s, another famous deep-dish spot with a couple of locations around the Chicago Area. I WAS hungry though, and like I said above, I really love pizza. 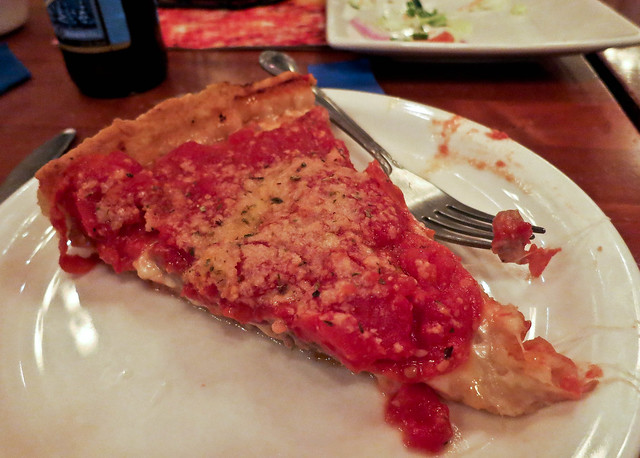 To my surprise though, I actually really liked Malnati’s deep dish. The crust was buttery and crispy, not doughy, and while the sauce to cheese ratio still wasn’t where I like it but it wasn’t nearly as gloppy and slippery as other places. The sausage was plentiful and tasty. It was actually pretty good!

I apparently have a lot of opinions on Chicago pizza judging by the length of this post. While I’m still Team New York Pizza, Chicago really didn’t disappoint me in the end. After all, pizza is still pizza, and pizza is good.

Full Disclosure: Chicago Pizza Tours allowed me to attend their tour free of charge. All passionate pizza opinions are my own.

My travel blogger friend Cailin from Travel Yourself also took the tour. You can read her review here: Chicago Pizza Tours aka 3ish Hours of Heaven.

27 thoughts on “My Epic Quest to Love Chicago Pizza”