What do you think of when you hear Brazil? Sparkling, sandy beaches and giant rock formations might come to mind, or an image of the giant Christ statue towering over the city of Rio de Janeiro. Maybe you think of women (and men) in tiny swimsuits and the grandiose costumes of Carnaval. Perhaps you’re thinking of the giant communities built up on hills. Whatever your mental image may be, it’s probably really vivid and full of color. Brazil can definitely have that impression on people.

I made the choice to study abroad in Brazil for 6 months, a summer and fall program combination that would enable me to live in Rio de Janeiro and study at a private university in the city. While there, I“mythbusted”my own preconceived notions about the country, the culture, and its people by observing the reality of life there. Here are some of the most common misconceptions I regularly hear about Brazil and what I learned about them from my time living there. 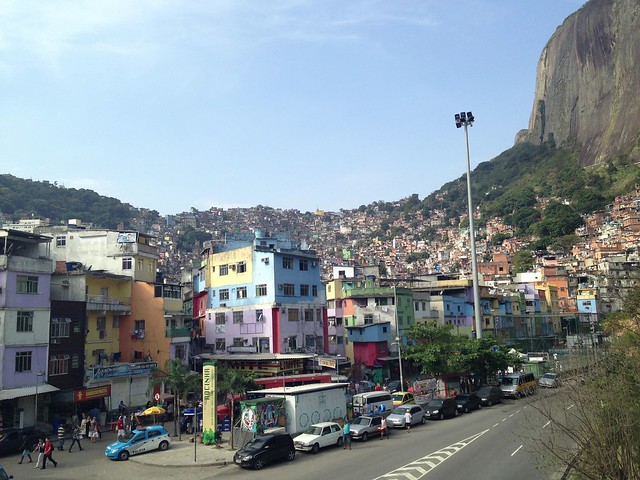 Rocinha, one of Brazil’s largest favelas, sits on the side of a giant rock formation.

More often than not, I’ve told people that I came back from Brazil and they ask me if I’m fluent in Spanish. Since Brazil is located in South America and the rest of the continent speaks Spanish, some people just assume that Brazil speaks Spanish too. This is not the case – Brazilians speak Portuguese!

As a tiny history lesson: Brazil was once colonized by Portugal and received independence thereafter. Though many Portuguese people left, the language stuck, and now Brazilian Portuguese is what the entire country speaks. Though the two languages are structurally and developmentally similar, many people in Brazil don’t even understand Spanish very well unless they’ve studied it in school!

Likewise, plenty of people visit Brazil thinking most people will know how to speak English. This just simply isn’t the case. While many Brazilians who work in tourism (read: hotels and tour guides) can speak English fairly well, the common trend I saw while there is that peoples’ knowledge of English is extremely basic. With that said, it’s important to learn a few phrases in Portuguese before your trip, not only to be able to navigate throughout your stay but also to avoid getting ripped off on things like street markets and taxi rides.

Because the rest of South America is extremely cheap to travel through, people tend to think that Brazil is the same way. This is definitely a myth. Most of the time, Brazil is just as expensive, if not more, than most major cities in the United States. My $6 face wash from Target costs the equivalent of over $100 in Brazil! Peanut butter easily runs around $15 for a jar and eating out typically costs $15-$20 per person. You can expect anything imported to cost two to three times as much as you’re used to.

Basically, Brazil is not cheap, and my best advice for travelers to Brazil is to bring everything you think you may need from home, especially toiletries, medicine, and clothing. If you don’t, you may have to pay a pretty penny to get it in Brazil.

Usually, when people think of Brazil, Rio de Janeiro comes to mind. Rightly so – Rio is an iconic city with many incredible sights, like the world-famous Christ the Redeemer statue, Copacabana and Ipanema beaches, and the soccer fan’s dreamy Maracanã stadium. Despite Rio’s popularity on the world scale, Brazil has a lot of other (arguably more amazing) landmarks and cities worth seeing, each with its own individual personality and highlights.

Just like most other countries, Brazil is divided into states, each with its own unique culture, accent, and food. Most of the civilized areas are along the coast, which means that access to some of the world’s best beaches is plentiful. If you’re planning to visit Brazil, be sure to hit some of the country’s other unique areas, like the Amazon region and the northeast area. Brazil truly does have a lot more to offer than Rio de Janeiro, though it may take some effort and planning to see. 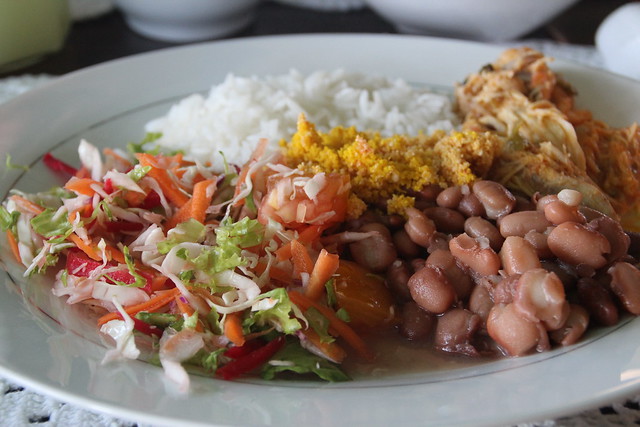 Many of my meat-loving friends ask me if I ate at churrascarias, or Brazilian steakhouses, all the time. These are now a huge trend in America, and at $40+ per person, you can get a dinner that consists of a full salad bar and unlimited meat selections, brought to your table and cut right in front of you.

In Brazil, these dinners cost just as much, and on a twenty-something’s budget, $40 per person per day would definitely have drained my bank account. Churrascarias are just as much a luxury in Brazil as they are in the United States, as most of these are heavily commercialized and aimed toward special occasions and tourists. A more common food option is a lanchonete, or a small, local restaurant specializing in typical Brazilian foods – rice, black beans, a simple meat dish, and a salad.

Brazil Is Completely Unsafe for Tourists

Movies like Tropa de Elite and Cidade de Deus portray Brazil as a violent and crime-ridden place. While Brazil does have its fair share of crime, especially against foreigners, hiding your valuables and acting confident can help lower your chances of being targeted. I spent six whole months there, and even though I don’t look the least bit Brazilian, I was able to go the whole time without being robbed or threatened.

Some general tips for avoiding being robbed are to avoid standing out as a tourist. Tourists in Brazil are known for speaking in foreign languages very loudly, wearing flashy clothes, and carrying iPhones and other valuable electronics. If you don’t fit this profile, your chances of getting robbed are a lot lower. Brazil was completely safe for me as an American, non-native-Portuguese-speaking resident, and it can be safe for anyone else, too!

You Can See Brazil In Just A Few Days

While I was living in Brazil, I had the amazing opportunity to travel around the country. In six months, I thought I could see basically everything. Boy, was I wrong! Brazil is massive and, because of the sheer distance between different areas, it requires a lot of time and money to see in its entirety. During my time there, I can’t even say I covered half of what I wanted to see. Most Brazilians can’t even claim to have seen it all.

Brazil is an extremely diverse country and it would take a lifetime to see every gem it has to offer. The good news is that no matter where in the country you go, Brazil has breathtaking beaches, food, and festivities to enjoy and remember for a lifetime.