It was one of those foggy days. My boyfriend and I left our lodge early to hit the road and drive all the way up Namibia’s Skeleton Coast. It was dark and cold. Everyone else was still sleeping.

We switch on the heater of our 4×4. The night before we filled up our tank. Where we’re going, gas stations are few. While sipping our warm coffee to help us wake up, Namibia National Radio keeps us company with a mix of English, German, and African songs. James Bay is on, singing something about lonely water and being caught against the tide. I put on an extra sweater. My brain is too sleepy to process the lyrics. 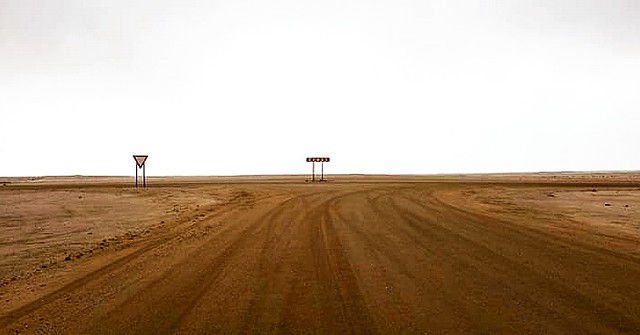 We’d started our road trip in the southern part of the country a couple of weeks ago and worked our way up via the Tsaris Mountains, Naukluft Park, and Swakopmund. It was low season and there were hardly any other travelers. The lack of visitors made an otherwise popular town called Solitaire truly live up to its name. We were lucky to have the Deadvlei completely to ourselves, and even managed to take a nap on its dry grounds in the shade of one of those dead trees famous from the travel guidebooks.

The Skeleton Coast stretches hundreds of miles, all the way up to the Angolan border. Its creepy name was daunting, always had been: the Namibian native peoples call the coastal strip ‘the land god made in anger’, and Portuguese explorers that passed by centuries ago named it ‘the gates of hell’.

It was obvious why: the many wrecks of stranded ships are the coast’s main attraction. The permanent, thick fog, the rocks hidden under the water, and the aggressive waves made the ocean difficult, if not impossible, for ships to navigate. 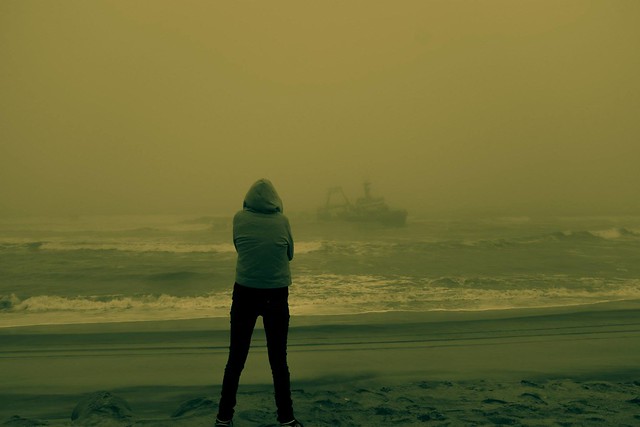 Ships that stranded hundreds of years ago were still being discovered to date. As recent as in 2008, geologists stumbled upon a 500 year old wreck of a Portuguese ship, completely buried in the sand. In 1533 it set off from Lisbon to India, and vanished near Namibia. Its crew members were never heard of again. The wreck was filled with gold, old coins and ivory tusks, estimated at a total value of $12 million.

After a couple of hours driving, we passed the first shipwreck. The sun was slowly rising, but the grey fog blocked its rays, preventing the air from warming up. The ship had stranded decades ago and was stuck just off the shore, the hull of its rusty body buried in the sand. While violent waves crashed into its skeletal remains on the rhythm of the ocean, it did its best not to give in and tumble over.

We drove our car as near the beach as possible to take some pictures. It was still cold and the fog limited our view. I thought we were the only spectators. There wasn’t a seagull in sight and the vicious waves and the wind were all I could hear.

But then, out of nowhere, a young Himba girl approached us. She lived by herself, in a tent somewhere nearby. Her family was in the north-western part of the country, where they live a life according to the traditions of their ancestors. But that wasn’t the life she wanted, and so she took off, taught herself how to get by in English, and was now trying to make some money selling precious stones to tourists. I’m sure she dug them out of the earth herself. She complained about how little tourists had passed by in the last couple of days, so for a couple of bucks I bought a tourmaline crystal so black it reminded me of death. According to the girl’s ancestors, it protects from negative energy and keeps away evil spirits. I figured it couldn’t hurt.

We continued our journey and mile after mile we drove further north along the coast. A signpost pointed towards a placed called ‘St. Nowhere’. It couldn’t have been more appropriate.

In stark contrast with other parts of the country which are famous for their wildlife, nothing seems to survive in the Skeleton Coast, except for a smelly seal colony that must have lost its way. In the war Nature vs. Men, nature clearly won this battle. 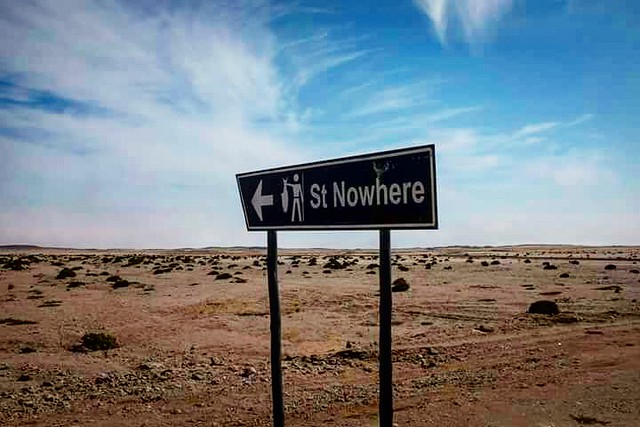 We marveled at the distances, the dryness, and the plain, vast nothingness. There wasn’t much else to see besides sand and rocks, yet it was fascinating. I imagined this must be what the moon looks like: bleak and beautiful.

Coastal villages were scarce. We had passed the last tiny settlement a while ago. Traffic signs were getting fewer. The last one we saw had animal skulls hanging from it. Our companion Namibian National Radio died off hours ago. We no longer had cellphone reception. The fog never seemed to disappear: the wind constantly blue it up onto the shores.

Every now and then we saw another isolated shipwreck. Some only visible depending on the tide, others so deeply ingrained in the sand that only their bow, or what was left of it, can be spotted.

We turned off the sand road in the direction of the beach to see another stranded ship that was supposedly located around there. I had heard this one was quite impressive. To my surprise, it was still a long way to the dunes and the sand was getting deeper and deeper. Even though we had a 4×4 I was terrified of getting stuck: it wasn’t going to be easy to pull the car out of the sand and we’d certainly not be able to get any help. After all, we hadn’t seen any other people in the last couple of hours and our cellphones didn’t work. 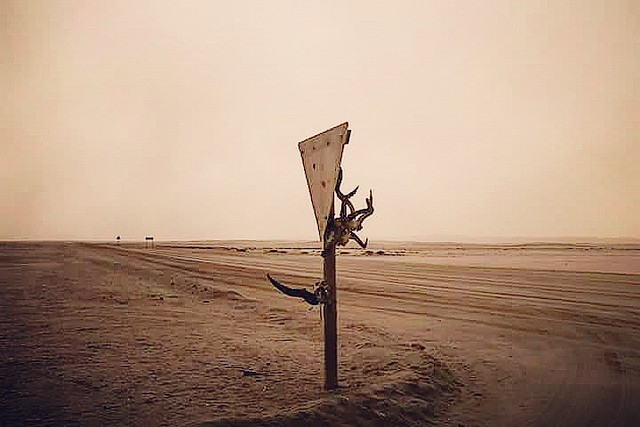 We decided to park our car and walk. I opened the door and stepped out. A strange feeling snuck up on me. The silence was deafening, reflecting the emptiness of the land and emphasizing the high-pitched howling sound of the wind. I wanted to tell my boyfriend and see if he felt the same way, but the sound of my voice didn’t seem to travel far enough to reach his ears. It was as if I was talking in a vacuum. I raised my voice, to no avail.

There wasn’t any path to follow and it was difficult to estimate how long it would take us to get to the ocean. Our vision obstructed by the fog, we set off in the direction where we thought the dunes were located. My steps squeaked in the sand, as if it were fresh snow.

To break the silence and focus on something other than my eerie surroundings, I started humming ‘Hold Back The River’. James Bay left more of an impression than I thought.

I was getting thirsty. Our bottles of water were still in the car.

After a good 20 minutes of walking, still no dunes in sight, my boyfriend suddenly stops.

“We have to go back to the car NOW!” he screams.

“What? We should be almost there by now, it can’t be that much longer”, I replied.

He points to the white sand, just in front of his feet.

As the blood rushes to my head and the hair on my neck rises, I turn around to our car.

It disappeared into the fog. 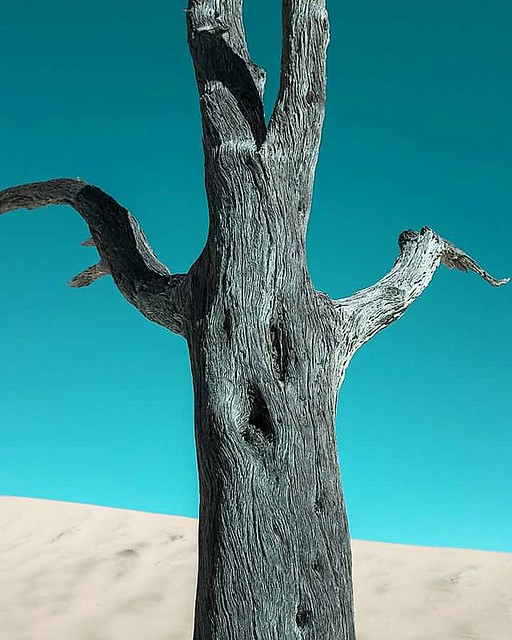 Forced to follow our own footsteps back, we start running.

I feel the crystal in the pocket of my sweater.

It probably weren’t the shipwrecks, but the human skeletons that gave the coast its name.

Cindy Kroon is a serial expat. Originally from Holland, she’s currently living in the UK but is already contemplating where to move to next. She writes about her adventures, cultural clashes, and travel tips & tricks on her blog The White Rabbit in her own, no-bullshit way. She loves food, and doesn’t give a crap about how many countries she visited so far. You can follow her on Facebook and Instagram.