Quick – when I say “Naples,” what’s the first thing that comes to mind? Garbage? Mafia? Pickpockets? If any of these negatives are the first things to pop into your head, you’re not alone. There’s no getting around it – Naples has a PR problem.

As is often the case, however, there’s more than one side to this story – and Naples is also a city that’s absolutely worth visiting. Here are three reasons you should go to Naples in spite of everything you’ve heard. 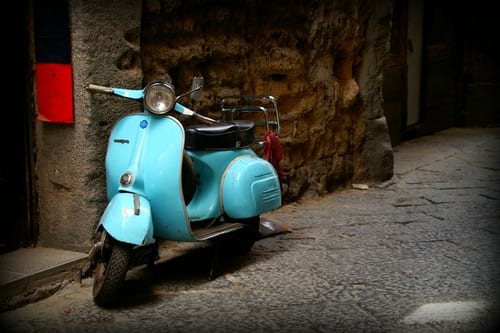 Lots of travelers complain about popular places being “too touristy,” but fighting tourist crowds tends to annoy intrepid travelers even more (never mind that they’re tourists, too). Naples is by no means a quiet backwater – this sprawling city is teeming with people in every corner and at pretty much every hour. The percentage of those people who aren’t residents, however, is relatively small when compared to tourist cities like Venice or Florence.

As a major port city, Naples gets is fair share of tourists who sometimes stop for the day to eat a pizza and stroll through the Archaeology Museum, but who more often head straight for the Amalfi Coast or Pompeii instead. In other words, even though there should be an enormous influx of cruising day-trippers in Naples (like Venice), there isn’t one. The result is that Naples is not only a living, breathing city, it’s also not rolling out the red carpet for anyone. Tourists and locals alike have to fend for themselves. 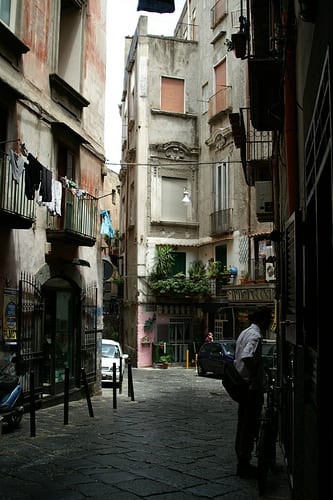 Streets in Naples are busy, dirty, noisy, and sometimes littered with garbage that hasn’t been picked up (an ongoing political/mafia problem). Some shops sell tourist souvenirs, sure, but most of the shops in the historic center sell stuff for the locals – laundry detergent, motorcycle helmets, fresh fish. Naples gives travelers an opportunity to explore a very real Italian city without feeling like they’re plodding along behind every other tourist in Italy – all without needing to get far off the beaten track at all.

While most travelers in Italy stay north of Rome, two of the most popular places to visit in Italy – the two things that draw even less-adventurous travelers to the south – are both easy day trips from Naples.

Pompeii was famously leveled by a volcanic eruption in 79 AD, and the excavated city is very close to central Naples. (In fact, the same mountain that did all the damage looms over Naples, too.) Pompeii is such an easy day trip from Naples that you can do it by yourself – no organized tour group required – and include a stop at the less-visited but better-preserved Herculaneum on your way back to the city. On another day, don’t forget to walk through the fabulous Archaeology Museum in Naples, too, where most of the stuff they’ve uncovered at both Pompeii and Herculaneum is on display. 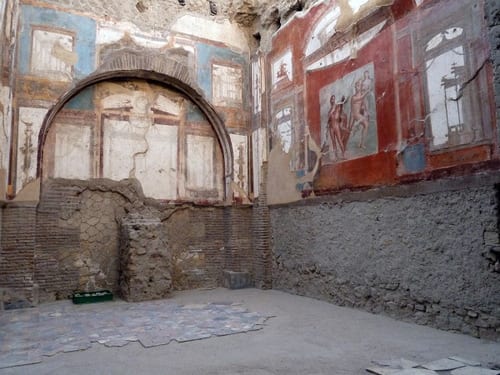 Now that you’ve got your history component covered, plan another day trip to visit the yes-it’s-really-that-beautiful Amalfi Coast. The town of Sorrento is an easy train or boat ride from Naples, and from there you can take a bus up and down the coast (or rent a scooter, if you’re more daring) for a day’s worth of fun in the sun. If you can afford a night or two along the coast, that’s great – you’ll certainly see more of it – but hotels on the Amalfi Coast are so much more expensive than most hotels in Naples that you’ll save a bundle by making it a day trip (or two) instead.

Here are some more fun things to do in Naples.

Which brings me to…

When compared with other big cities in Italy, Naples is downright cheap. It’s not cheap in the sense that it can compete with Southeast Asia, but a whole pizza and bottle of water at one of the city’s famous pizza places will only cost you €5-7. That’s a seriously inexpensive meal by Italy’s standards, and yet it’s also some of the best food you’ll find in the city.

You can find high-end hotels in the city, but there are plenty of budget-friendly hotels right in the Naples historic center, too. Not only that, the fabulous Hostel of the Sun is one of the best-rated hostels in Italy as well as Europe, and dorm beds start at less than €20/night. 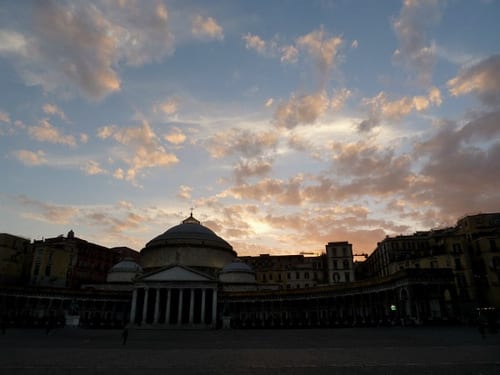 Naples has its share of free things to do, but even the museums and galleries and attractions that charge a fee are pretty inexpensive – and if you’re going to be in town for a few days (and especially if you’re going to Pompeii and Herculaneum) you can get one of the regional Campania Artecards that gives you major discounts on attractions as well as free transportation. A 3-day card for the whole region is €27 and gets you into your first two sights completely free, with 50% off all other sights after that. Considering Pompeii and Herculaneum are each €11 to get in, the thing almost pays for itself when you make those your first two (and therefore free) attractions.

Remember all those negative things you’ve heard about Naples? Don’t forget them entirely.

Okay, now that you’ve moved Naples up on your list of places to visit, I want to remind you that all those things you’ve heard – about the garbage crisis and the petty thieves – shouldn’t be entirely forgotten. They shouldn’t keep you from going to Naples, but they should make you stay alert.

Here are the things to keep in mind:

The bottom line? Make a beeline for Naples and have a pizza for me.

About the Author: Jessica Spiegel is a Portland-based travel writer with BootsnAll, the RTW travel resource, for whom she writes the WhyGo Italy travel guide. She didn’t expect to fall in love with Naples on her first visit, but fall she did – and she’s been encouraging people to visit the city ever since.

43 thoughts on “Why Naples is Better Than You’ve Heard”