Some people who visit Australia make it further north than Brisbane. Some of them even make it up to Cairns, but not that many continue even further north of Cairns, up into the Cape York Peninsula. I certainly understand why: it’s not the most comfortable corner of the world. If the giant bats, the jellyfish or the crocodiles don’t get you, the heat certainly will. But the wet and rugged Far North Queensland is definitely worth a look.

If you missed the last post, I’m currently navigating my way down the East Coast of Australia in a camper van, thanks to a generous sponsorship by Traveller’s Auto Barn. We picked up our chubby van, on Tuesday and after a few hours of grocery and supply shopping, left Cairns headed north. 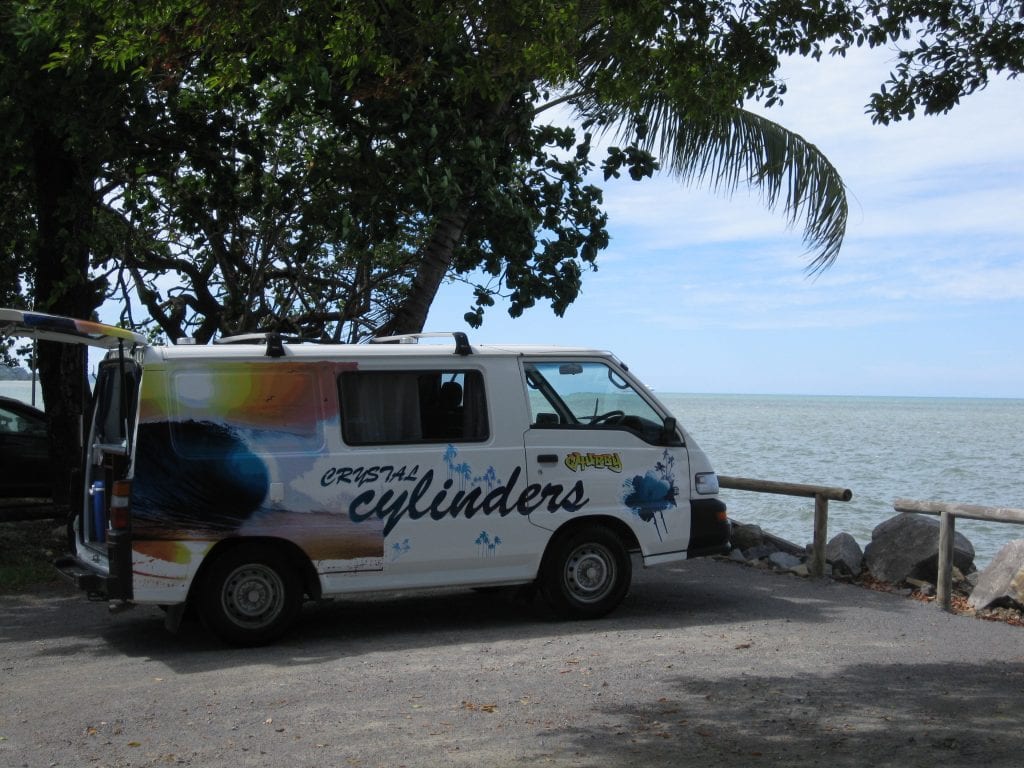 Cairns was nice enough- after almost 2 months of travel I was excited to be by the ocean… even if I couldn’t swim in it. Swimming in town is limited to the very pleasant man-made lagoon on the central promenade. The rest of the town seems solely designed to sell you food, acceomodations and tours to the Great Barrier Reef. After only a day and a half there, we were ready to move on to and explore.

Did I mention that I don’t know how to drive a stick shift? In spite of my Dad’s best efforts the skill has never really stuck with me. This leaves Liz as the primary driver on our trip. Isn’t she the best? At least I’m a good navigator and travel planner, ie not totally useless. Anyways, Liz driving leaves me lots of time to check out the view. And it was a beautiful view. The road moved in rolling curves following the line of the Pacific. Below I could see miles and miles of untouched beaches. They are so pristine because nobody dares swim here for fear of crocodiles and jellyfish. The North Queensland coast is a tantalizing game of look but don’t touch. 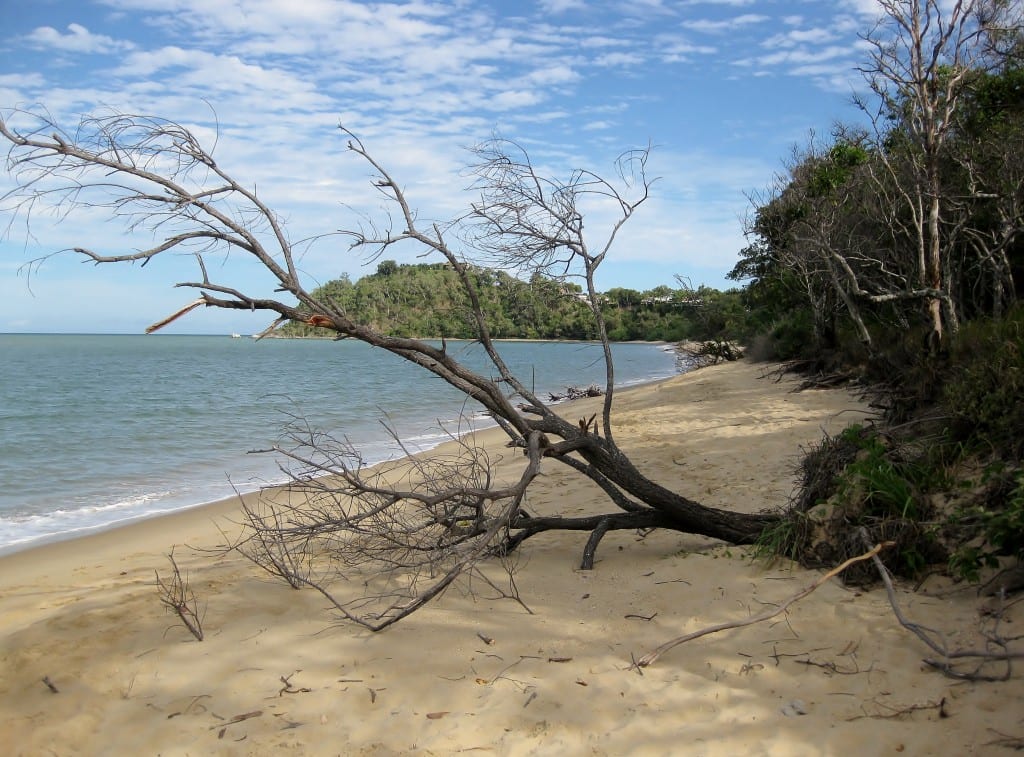 Our destination, Port Douglas, was just about 70 km north of Cairns. With less than 1000 residents it’s still the biggest city up this way. The residents who do live there all seem to work in the hospitality industry. I was totally charmed: where Cairns is flashy, Port Douglas is classy, quiet and peaceful. The town center was chill and welcoming with lots of cute coffee shops.

The next day we headed towards Mossman Gorge. Mossman is at the southern tip of the Daintree Rainforest, a protected national park and a UNESCO World Heritage Site. It’s home to something like 15,000 plant and animal species. The gorge itself is pretty enough- swift and crystalline water rushing over boulders the size of cars, but the most interesting bit was the rainforest walk.

The thing about rainforests is that they make you feel very very tiny. When you are standing at the foot of a hundred year old fig tree that’s 95 meters tall, you feel as insignificant as a blade of grass. Things grow like crazy in the rich humidity up here: bats the size of parrots, spiders the size of birds and birds the size of people. I was hoping to see a python- they grow up to 6 meters long (don’t worry mom, they’re “harmless: according to the National Parks brochure)! Alas, I had no such luck. 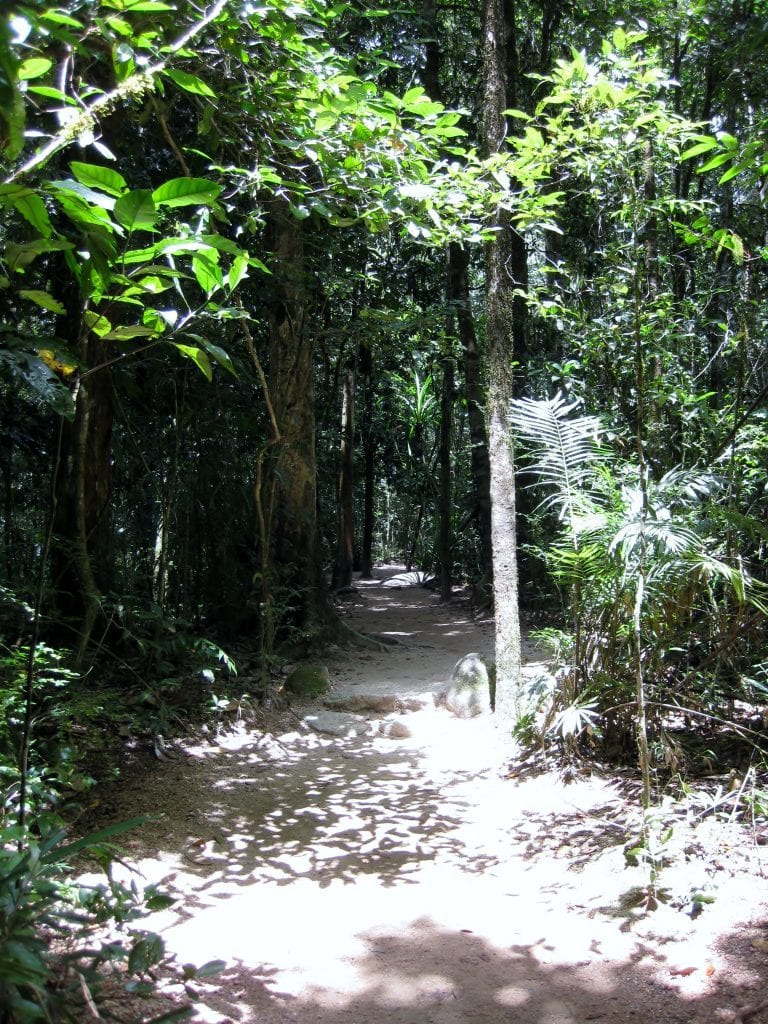 The original plan was to head even Further north, up to Daintree Village and then onto Cape Tribulation. That’s the end of the line: the paved roads stop and further travel is possible only by 4WD. I would have liked to reach the end of the road, but alas, the November heat and steam was really too much for us- even a simple walk felt like doing aerobics in a sauna. We made the decision to head South for cooler climates.

Even though we never made it ALL the way north, we still saw some pretty fascinating things that many people never get to. I think that’s one of the major beauties of a road trip: you get to see places you might otherwise never have dreamed of.

19 thoughts on “North of North”