Have you heard of the Playa Del Amor?

If you haven’t heard the name (it’s also known as the Hidden Beach of Mexico), you’ve probably at least seen the pictures. A crystal blue pool of water and a white sand beach, hidden inside a cave with the top sliced off to let the sunshine in.

It looks photoshopped but it is a real place, Playa Del Amor is on the Marieta Islands outside of Puerto Vallarta.

This photo, and a couple other’s like it, are extremely popular on Pinterest and circulate around Facebook too. I stumble across them all the time and half a dozen people emailed some variation to me when we announced we were headed to Mexico. Now that we live just an hour outside of Puerto Vallarta I also see the photo plastered across the various tour agencies around Sayulita.

Of course, we were always going to go, how could we not when it’s only a boat ride away? It’s not a cheap trip though: most boat tours out to the islands run between $75-$100. We decided to wait until Mike’s family came to visit since they were also excited to see the famous beach.

We booked with Sayulita Sailing Explorations, who were great. 1000 pesos a person (roughly $75) got us a full day out on the water including lunch, drinks, snorkeling and even fishing. They were professional, fun and really nice when I tripped on the deck and gashed my toe open literally five minutes after we left port. Their boat is small, maybe 30 people tops, compared to some of the bigger tour boats which seemed to pack in people by the hundreds (this probably should have been my first warning).

The boat ride across the Bay of Banderas was actually the highlight of the day. Deep blue sea, beers, sunshine and best of all: Whales. Humpback whales travel down to Mexico in the wintertime to breed (I thought about titling this post Whales Gone Wild but unfortunately it turns out I’m terrible at photographing whales). The whole trip was going fantastic until we got to the Marietas.

The islands are a series of scraggly volcanic rocks. In the first half of the twentieth century, the area was a military test-site. Government funded bombings and explosions created a series of jagged caves and holes in the island, including the famous beach, Playa Del Amor.

You swim through a partially submerged rock tunnel to reach the beach, a battle against the current determined to spit you back out. Once you make it in you find yourself in a warm clear tide pool with the beach in front of you and the sun streaming in above. “This is the wrong beach,” I told Mike.

It wasn’t. So what happened? Two things:

Compared to the photos the alcove looked too small, too dingy. The cut out at the top was bigger, less circular more sloppy. It was still kind of neat, but not majestic or magical. I didn’t feel like I was in a Pinterest moment at all.

As we floated in the bathtub temperature water, Mike explained to me how the photos had deceived me with the use of wide-angle lenses and creative angles. Even though the sun was shining and the water was brilliant, it was just impossible for the beach to look like it did in the picture.

Only minutes after we arrived a dozen other boats of visitors pulled up outside the mouth of the cave.  As we sat there impossible amounts of people in bright orange safety vests began to pour into the cave until the entire area was packed with people taking pictures, sunbathing and clowning around.

Now, this is partially our fault: early January is one of the busiest times of year for Mexico tourism. Our friends who visited back in November had a much clearer view. And of course, those people had just as much right to be there as us, but the effect on this “hidden beach” was overwhelmingly negative.

I learned back when I was wedding planning that nothing on Pinterest is as perfect as it seems. Everything is shot at the single most perfect moment then stylized, edited and framed in such a way you will never be able to reproduce. The current information out there only perpetuates this myth (probably because they are getting their information from press releases), like this Huffington Post article that calls the area one of the World’s Most Secluded Beaches.

This is not an undiscovered island cove, this is a major tourist attraction and should be treated as such. The boat ride was fantastic, the whales were amazing, but Playa Del Amor itself is fast on it’s way to becoming an exploited tourist trap. In many ways, it reminded me of Maya Beach in Thailand, another “hidden paradise” that isn’t.

So next time you let an idealized image dictate your vacation plans, think twice.

(Go Pro pictures by my talented husband, who wrote about our experiences at Playa Del Amor on Art of Adventuring.) 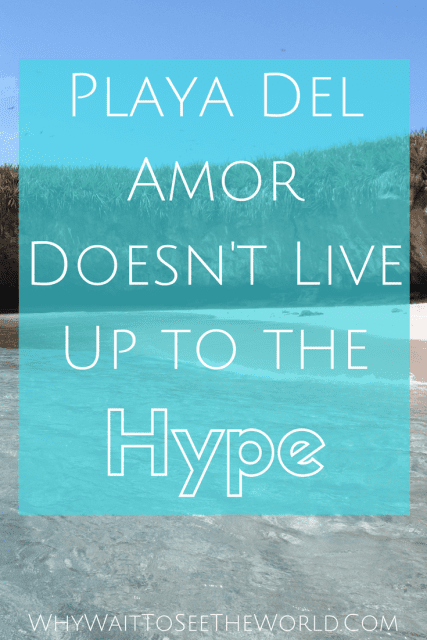