Today’s guest post by Marta of a Girl Who Travels is a continuation of Wednesday’s article on visiting Sintra.

Spiral towers mapping out the myriad footpaths, their twists and turns leading to grottos and moss-covered wells where the sound of dripping water marks the way to hidden passages and underground walkways guarded by waterfalls and ambiguous statues… It’s not often on your travels that you step right inside a fairytale and yet, this is exactly how it feels once you walk through the grand, metal gate of Quinta da Regaleira in Sintra, Portugal. 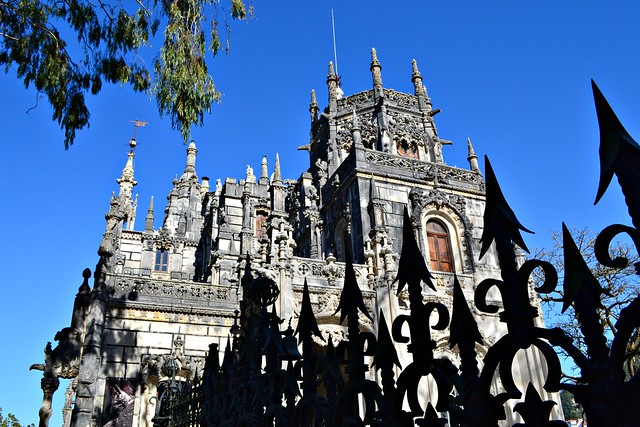 This bewildering estate filled with enigmatic structures mixing Romanesque, Gothic and Baroque style with alchemical and esoteric symbolism, was created by Antonio Carvalho Monteiro, an eccentric millionaire entomologist. You know a place is worth visiting when the history behind it sounds like a page ripped out of a 19th century novel, and Quinta da Regaleira most certainly does not disappoint. Both the palace and its grounds, home to exotic plants and centuries old trees, are the reflection of Monteiro’s fascination with metaphysics, Masonry and the legend of the Knights Templar, combined with the work of Luigi Manini’s architectural genius. If you ever wondered what it would be like to step your foot into a wonderland where magic breaths down your neck and fairytales come to life, then Quinta da Regaleira is the right place. 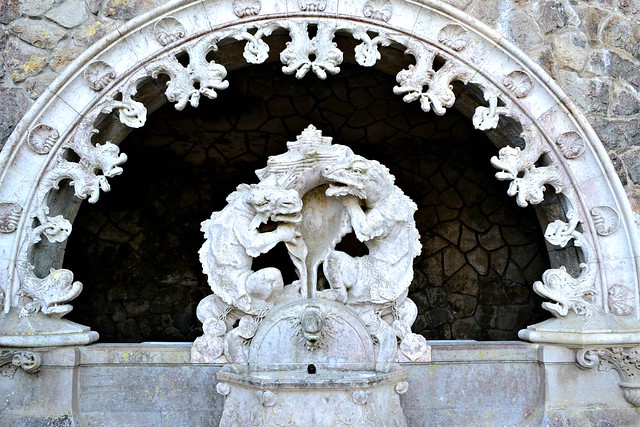 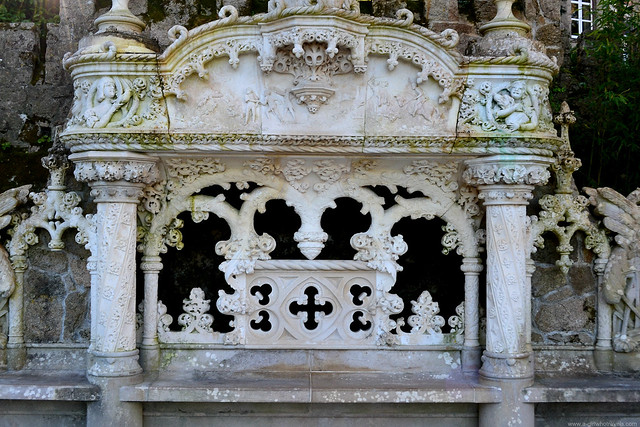 One of the first things you notice as you walk through the main gate is the imposing three floor hilltop palace adorned with pinnacles, gargoyles and turrets, more appropriate for the set of a mystery movie than a small Portuguese town. The eclectically exuberant interiors where fantasy goes hand in hand with neo-medieval and baroque-inspired décor remains true to Monteiro’s passion for the mysterious; the tower on the third floor houses a private study and a laboratory, while the octagonal turret at the opposite end of the building is a reference to the sanctuary of The Templar Church of Tomar. 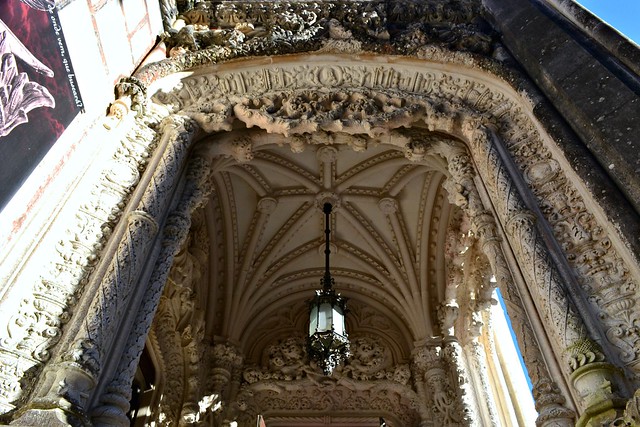 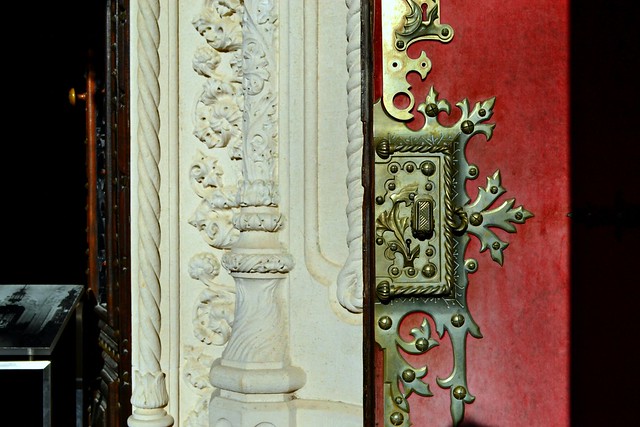 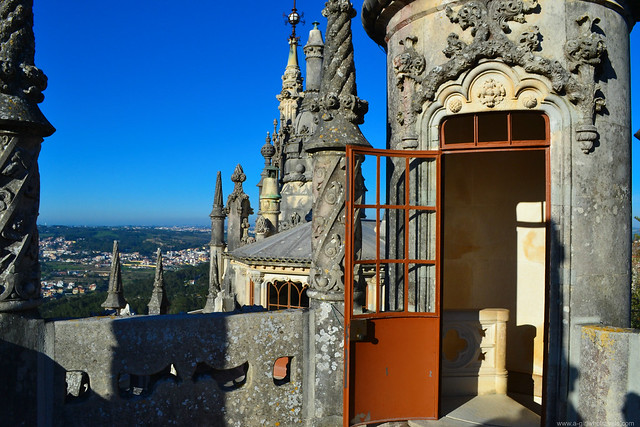 The palace is surrounded by a large, eerie park, shaded by sequoia, cedar and cypress trees. Keep an eye out for intricately decorated benches and seemingly abandoned alcoves hiding between the leaves. The slightly overgrown, winding paths will take you to stone-built wells, fountains, grottos, labyrinths and Medieval-style towers. If you look carefully, you’ll notice that some of the paths lead to enchanting underground tunnels and hidden passageways connecting multiple entry points across the estate. Start off at the Cave of the Orient on the Eastern side of the park or jump over large rocks scattered across the Lake of The Waterfall – both the cave and the grotto behind the waterfall lead to an underground passage pointing to the 27 metre deep Initiatic Well which is believed to have been a site of Masonic rituals. The dim, moss-covered well has a spiral staircase running along its stone-built walls; once you climb it, the well echoing your steps, you’ll be back in the park, surrounded by large sequoia and yew trees. Otherwise, you can continue down the underground tunnel until you reach the Portal of the Guardians – an enigmatic structure joint by twin towers at both ends. From there, you can continue your walk through lime and chestnut trees, until you reach Regaleira Tower overlooking the park, just a short walk from another grotto. 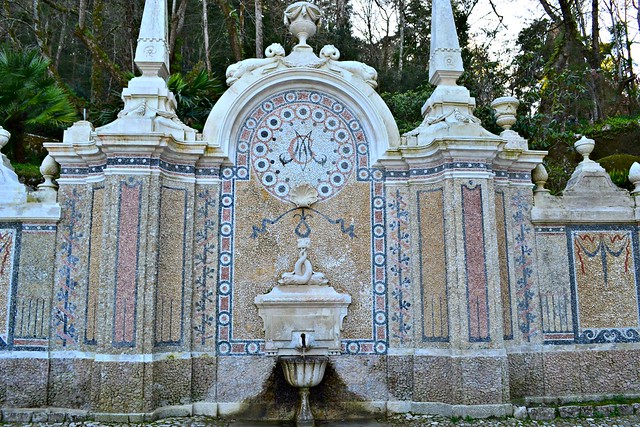 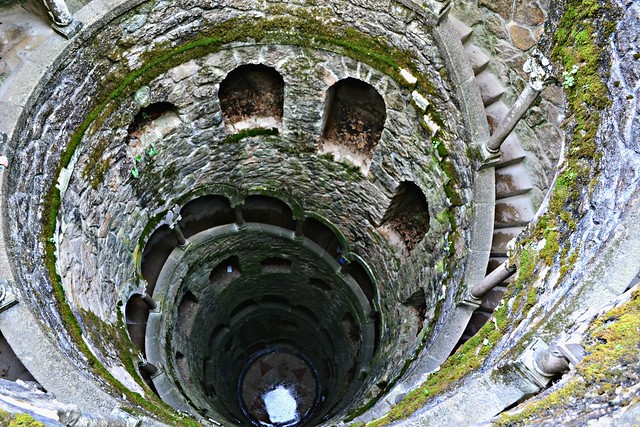 There are few places which blur the lines between fantasy and reality quite as well as Quinta da Regaleira – the estate is F. H. Burnett’s Secret Garden meets the mysterious stories of Brothers Grimm. You can easily spend half a day wandering through nooks and crannies, only to discover more reasons to keep exploring. With the estate open till 8PM in the summer you’re in luck – you can breath in the magic to your heart’s content and maybe even get a glimpse of the sunset.

Marta is a digital nomad with a serious case of wanderlust and the creator of A Girl Who Travels where she writes about female, solo and budget travel as well as self-development through travel. She’s been location-independent for over four years.

1 thought on “Quinta Da Regaleira: Magic and Mystery in the Heart of Portugal”