Most vacations to London include visits to Big Ben, Trafalgar Square, and the British Museum. If after you’ve seen all the major landmarks you are looking for a more nuanced look at London, here are some lesser known quirky things to do in London:

The National Library- Tucked away next to St. Pancras station, the National Library is sorely under-visited and underappreciated.  The highlight is the Treasures Gallery, which is free and open to the public. Here you will find priceless treasures of British literary history, including original manuscripts of Beowulf, Le Morte D’Arthur and (my personal favorite) Alice in Wonderland. There’s also an assortment of beautiful religious texts, handwritten Beatles lyrics and an entire room showcasing an original Magna Carta.

John Soanes Museum– Hidden near the Holborn Tube station is the weird and wacky Soane Museum.  The architect Sir John Soane constructed his house museum to hold his extensive collection of art, statuary and random knick-knacks. There’s even an Egyptian sarcophagi in the basement. Wandering the house is like visiting your very eccentric, very rich pack rat grandfather. Admission is free but there is often a wait to get in so give your self some time.

St. Dunstan’s in the East– Hidden deep in the heart of the financial district is this charming open-air ruin. When this 19th-century church was nearly destroyed during the Blitz, the ruins were turned into a public garden. The square is an overlooked pocket of peace in the midst of the business district.

London Aquarium– Yes, London has an aquarium. It was featured in the movie Closer with Clive Owens and Julia Roberts. Located on the Southbank near the London Eye, the aquarium is a little pricey but a stunning interactive experience.

Tate Britain– The Tate Modern and the National Gallery are the all-stars of London art, but the Tate Britain is often overlooked. It’s a gem of a museum with interesting artwork spanning England’s history. Highlights include The Lady of Shallot, Ophelia, and my personal favorite Nocturne: Blue and Gold – Old Battersea Bridge by Whistler. Visit the information desk and pick up one of the self-guided tours with themes like “Hangover” and “The Color Yellow.”

Highgate Cemetery– London has some of the most spectacular Victorian cemeteries and Highgate is said to be the jewel in the crown. Not only is it one of the most beautiful cemeteries in the world, it’s also the final resting place of copious notables including Karl Marx, Douglas Adams, and George Eliot. The gently decaying cemetery even has its own monster, the Highgate Vampire.

Borough Market– Portabello Road Market and Camden Market get all the attention, with their seemingly endless stalls, but Borough Market is far more charming and delicious. Traders have been settled in the area since the 11th century, although the current incarnation of the market is modern. The covered market is a crowded maze of culinary delights.  Wander and fill up on free samples, pick up organic ingredients for dinner or plan a picnic.

Jeremy Bentham– when you’ve exhausted all other possibilities, why not check out the beheaded corpse of a great economist? This is not just a macabre rumor, I spent a semester studying at University College London and I saw the old guy myself. Visit UCL on Gower Street, walk into the main building and turn right. In a side corridor, you will find the preserved remains of college founder Jeremy Bentham sitting in a wood and glass cabinet. Apparently, Bentham specified in his will that his body should be preserved and displayed in the halls of UCL. Don’t worry the creepy head is actually made of wax (the original was stolen by a rival school).

Your turn: What did I miss? Any other quirky things to do in London?

Looking for a Place to Stay in London?

The Brook Green Hotel in Hammersmith is a taste of old London.  This old pub is housed in an old Victorian building and offers free wifi, classic ales, and home-cooked food.

Qbic London City Hotel in Whitechapel is a trendy and modern hotel.  Let this modern and cozy hotel help you unwind after a day of exploring all the quirky things to do in London!

Looking for a central and affordable hostel?  Be sure to check out Clink78 Hostel located near King’s Cross, a modern and colorful hostel in the heart of London. 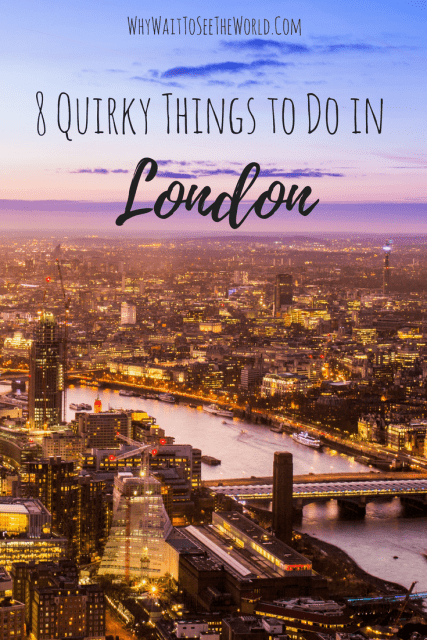 11 thoughts on “8 Quirky Things to Do in London”