I’d love to have the opportunity to DJ or go to a concert in a 90 AD amphitheatre with 20,000 spectators. The Arles Amphitheatre in Arles, France has plays, concerts, and bullfighting during the summer. When it’s not busy entertaining people, you can tour inside and around the amphitheatre.

Sitting in the middle of Arles, the Amphithéâtre d’Arles was first used by the Romans as a large sporting arena. Wild-animal hunts, executions of prisoners, and gladiatorial contests. After Rome fell, it was later reused as a fortress in 8th c. A.C where the construction of four watch tours took place. Soon after, 200 homes were built inside amphitheatre making it a small town called Arena-town. Sounds crowded. In 1825, it was excavated and restored and used again for entertainment and as a tourist attraction.

Since this was the first time I ever saw a Roman ruin, it was cool to be able to touch history and try to imagine it like it was in 90 AD with bloody hand-to-hand combats in the arena. I haven’t been to the coliseum in Rome yet but I hear it’s better than this and if that’s true, I can’t wait to go.

Arles is really easy to get to and makes for a great day trip (max 2). The train station is close to the city center. There’s a tourist information desk at the station with a detailed map and English speakers. It’s an easy walk from the station to the amphitheatre. It’s hard to miss. Just get lost from there and walk around the city, it’s not very big.

Not too far from the amphitheatre is the Theatre Antique. Not much left of it but worth checking out. 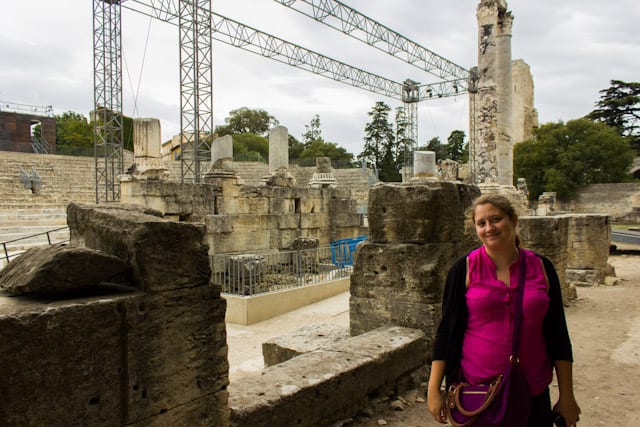 We did a day trip to Arles from Avignon. I think I would have preferred to stay in Arles rather than Avignon. It’s a lot smaller than Avignon. There’s a few good hostels on HostelWorld for both places.

It’s a short train trip from Avignon if you decide to do it that way. It’s easier if you have a Eurail pass so you can just hop on.

Thank you Eurail and HostelWorld for sponsoring us!