I wasn’t actually in rome for Christmas, just until December 23rd. It sure felt festive though: It was a great time to visit; festive and cheery, lacking in tourists and good weather. It might have been geography, or just luck but compared to chilly Venice and Florence, Rome was downright pleasant. At times it seemed less like the dead of winter and more like a crisp fall day: One of the most exciting things about visiting Rome is all of the iconic sights scattered about the city. The Colosseum, the Spanish Steps, the Trevi Fountain. Most of them are just as grand, if not MORE impressive in person: Roman Holiday happens to be one of my favorite movies (Sigh… Gregory Peck) and as I wandered around the city I imagined I too was an escaped princess who looked like Audrey Hepburn. My companions had not seen the movie but, I still dragged them to the out of the way Bocca della Verita, the “Mouth of Truth” made famous by this scene (sorry about the Italian). The thing is actually just a pretty water drain, but I couldn’t resist… 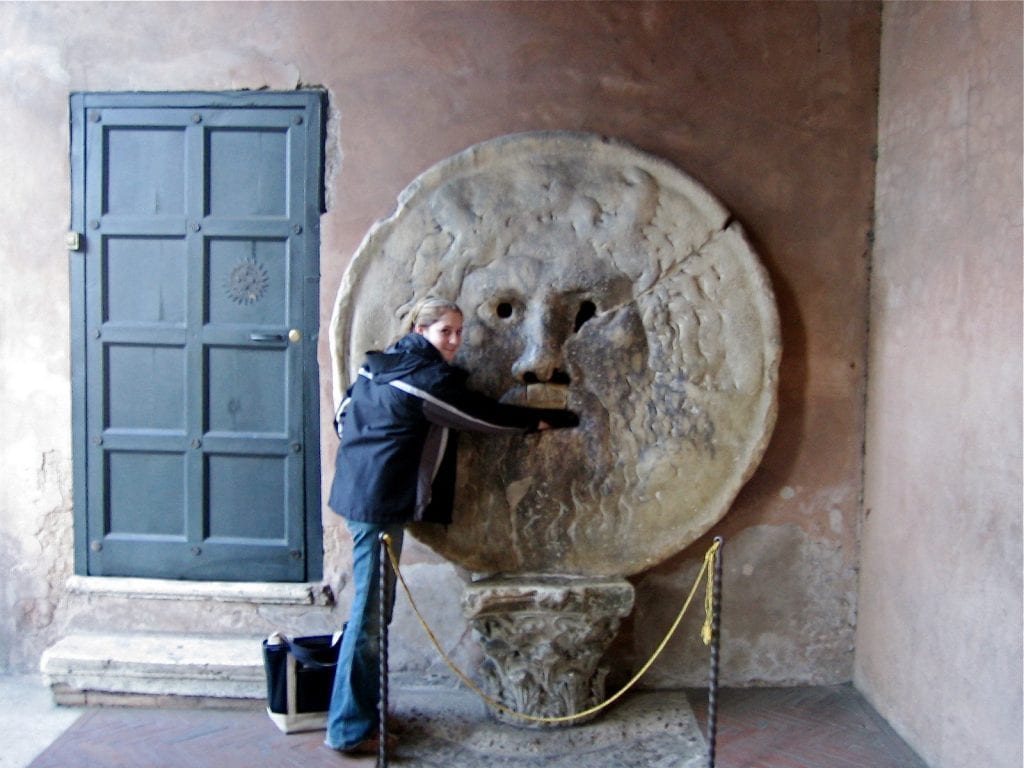 Luckily, it let me keep my hand.

Iconic in an entirely different way is Vatican City; the tiny enclave that is the home of the pope and Roman Catholicism. There were preparing for Christmas as well: I’m a but if a lapsed Catholic, and most of my knowledge of the vatican actually comes from Art History 102, not Sunday school. But Saint Peter’s Basilia is an awe inspiring piece of Renaissance architecture and excess, no matter what your background. Saint Peter’s is the largest Christian Church in the entire world- it can hold up to 60,000 people.  The dome which towers over the church is the tallest dome in the world. The wealth of detail is just dizzying. The Vatican museums are also impressive; they showcase just some of the massive amounts of treasures compiled by the church over the years- mainly sculpture and painting. They rival only the British Museum in their collection of re-appropriated cultural relics. Yes, this is where you will find the Sistine Chapel (smaller than you’d imagine), but I was more impressed by the sheer volume of stuff hoarded here. Returning from the Holy See you will pass over the Ponte Sant’Angelo below, adorned with beautiful sculptures crafted by Bernini. Truthfully, Rome itself is really one large scale, living museum. You can’t go a block without stumbling over a beautiful fountain, church or sculpture. I haven’t even mentioned the classical ruins which adorn modern Rome (more on this next week). This intertwinement between modern life, art, culture and history is what made Rome so special for me.

14 thoughts on “A Roman Holiday”