Earlier this week I ran down my favorite places to eat Mexican food in Sayulita. Today I’m running down the best of the rest. Due to its high expat population, Sayulita restaurants have the kind of huge diversity of international food that most small towns in Mexico could never imagine. Some of it is done better than others and sadly I never did find any decent Asian food. Now you might be wondering why you would travel all the way to Mexico to eat Italian, or bar-food or sandwiches. The answer is you probably wouldn’t but if you’re traveling or staying in Mexico for any significant amount of time, you’ll probably find yourself needing a break from tacos and quesadillas. Variety is the spice of life as they say. Here’s a rundown of where is worth your time, and where is just a waste. I’ve broken the Sayulita restaurants down by category.

There are half a dozen pizza places in town, mostly serving up greasy sub-par pies. Any pizza is decent pizza, but save your money for one of the two really good pizza places in town. Rustica is near the plaza and features elaborate wood-oven pies served by a friendly Argentinean guy. Our favorite is La Mexicana with mozzarella, chorizo, jalapeno, sauteed onions, sour cream, and cilantro. La Venezia is near the North Beach and is run by a couple of actual Italian guys. Their pizza is a bit more basic, but still very tasty. The garlic bread is great as well. This place is always super busy and popular with families.

For some reason I never quite figured out, there are a LOT of Italian expats in Nayarit. One of them, a guy from Parma, runs this gelato shop and it is totally legit. Seriously, don’t go to the “gelato” place in the square, walk the extra block to La Mora and you will thank yourself. Every flavor is terrific but stracciatella cacao (chocolate stracciatella) is out of this world.

Not the chain. Really. I had a hell of a time convincing Mike we should check out this tiny hidden restaurant, but it quickly became a favorite of ours for its ambiance and tasty pasta. Run by a couple of American expats, this isn’t true Italian, but it is the kind of red sauce restaurant you start to miss after too many tacos. Their homemade ravioli is great, but our agreed on favorite is the Italian sausage. I don’t know where they are getting this sausage but its spectacular stuff.

Sayulita restaurants have a lot of fine dining options, and we weren’t able to try all of them due to our decidedly un-fancy budget. We made a good effort though, and these are the places that are actually worth dropping some bucks. 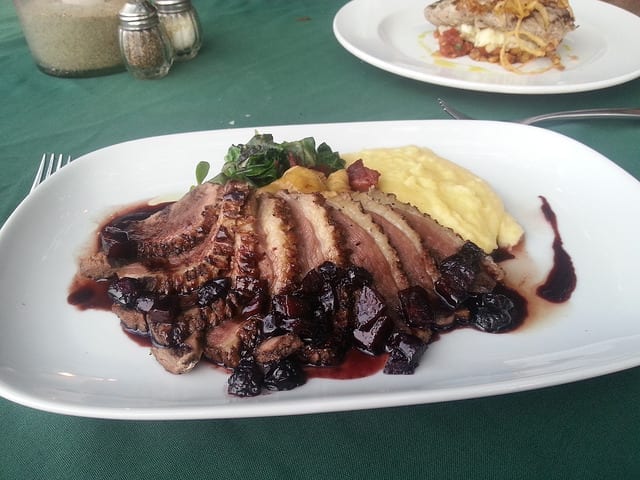 Don Pedros sits right on the beach and is popular with tourists and for weddings. As such, my expectations weren’t super high, but our two meals here were definitely some of the top meals of this entire trip. The food is European and ranges from pizza to filet mignon. Mike liked the grilled tuna on a bed of crispy onions and I had a magnificent roast duck breast covered in cranberry sauce. I would definitely make it a priority to eat here again next time we return.

Sayulita Grill is the place to go for an authentic Argentinean Asado (or at least as close as you can get all the way up in Mexico). You can get a decent bottle of Malbec and order the grill special which includes a giant salad and several generous cuts of meat and chorizo. Yum.

Tierra Viva is less expensive than the other two Sayulita restaurants listed and the food is excellent. They specialize in “creative cuisine.” Think chicken in blackberry sauce, homemade pasta and mahi-mahi with tamarind glaze.

As an example of how spoiled we got in Sayulita, I would always tell people that we lived just a block away from a real French bakery run by REAL FRENCH PEOPLE. The selection here is small but you can get a pretty legit baguette, chocolate croissant or coffee here. Don’t let the bees deter you. 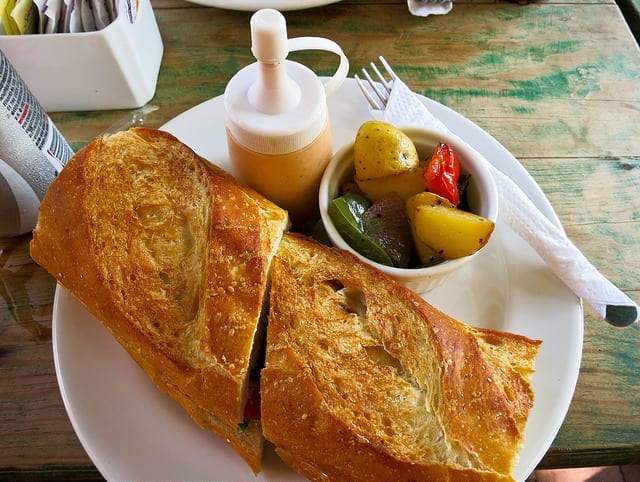 This place is crazy popular with tourists and expats but is also quite pleasant and good. They have a huge breakfast menu and a lunch menu with a surprising amount of healthy options. Of course, if you go you must try their signature dish, the chocobanana, which is not-surprisingly a frozen banana dipped in chocolate. Mike says they have good coffee.

If you’re in town on the right day and time you should definitely check out the Mercado, which has some interesting and different food options in addition to the craft projects, fresh produce and live music. We are partial to the crusty Italian sausage sandwiches, but the tamale vendor is quite decent as well.

Sayulita has some great bars as well as some clubs where you can have your eardrums blown out while you sip your vodka tonic. I am not a fan of the latter, but here are some great chill places. 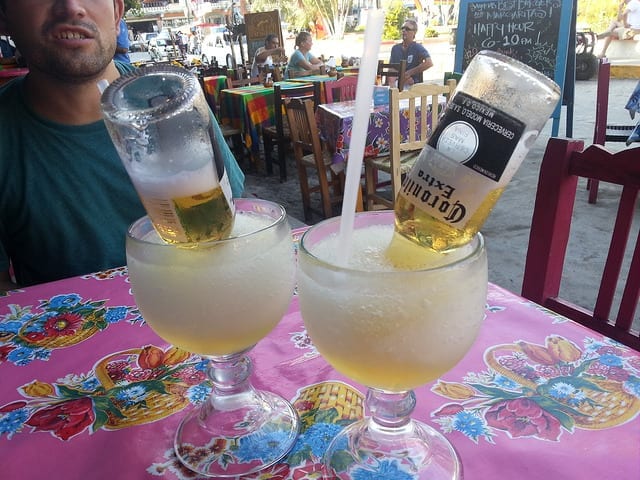 Monchis burgers are only okay, but we were often drawn to the place for other reasons. Namely, their sweet potato fries, their daily half-price margarita happy hours and their specialty Bulldogs. A Bulldog, for those of you unlucky enough to never have had one, is an enormous frozen margarita with an upturned beer in it. The delightfully sketchy Don Pato’s nightclub is upstairs and they sometimes have good live music.

Sayulita Public House is where you’ll find all the older expats having a quiet beer. Styled like a British pub, this bar is notable for it’s wide array of beers, which make a nice break from the ubiquitous corona, modelo, pacifico etc. They often carry interesting Mexican microbrew- but they aren’t cheap.

Barrilito, a tiny corner bar on the main square, was my favorite place for a casual drink. They had cheap beer, great wings, and American tv. It recently changed ownership, so I can’t say if it’s still as stellar as when Mike owned it, but it’s worth checking out.

Don’t Bother: If you’re craving Asian, Don Chow’s may look might tempting but it’s not worth the money, trust me. World Piece and Pizzas Rons are decidedly subpar pizza places (we never got around to trying Pizza Bao but it did not look promising). Miro Vino and Trattoria Toscana aren’t really worth the premium prices.  There are much better Sayulita restaurants so do yourself a favor and skip these.

Craving authentic Mexican while you are in Sayulita?  Check out our favorite Sayulita restaurants for Mexican food here! 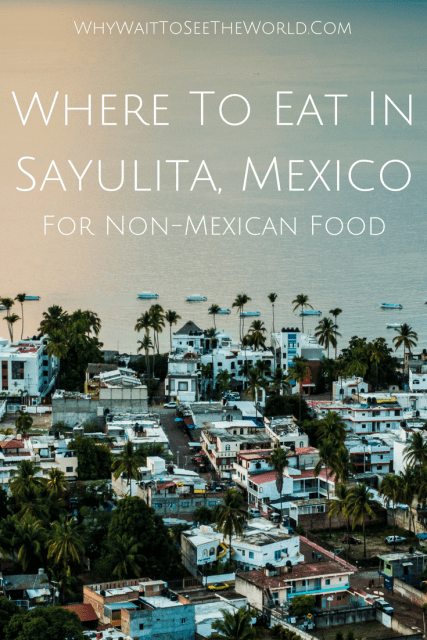 11 thoughts on “Sayulita Restaurants – Where to Eat in Sayulita Part Two: Non-Mexican Food”