Nobody wants to be boring.

Part of the drive to live an unconventional life is tied up with an incredible fear of complacency. Getting too comfortable, getting settled, getting stale. These are things that have been on my mind lately as Mike and I relax into a more fixed life here in Seattle. We have a couch, a social life, a freaking lease, and that is cool but also fundamentally very scary.

Although this is what I wanted, and I am enjoying our new fixed life, there is still that constant craving for more. Just because we are living more conventionally doesn’t mean I am ready to fully surrender myself back to “normal life.” So, where do I go from here?

The Happiness of Pursuit

You guys know that I read a lot, but one book I read recently, has really stuck with me. It was, the Happiness of Pursuit, by Chris Guillebeau, which was sent to me for review by Random House. I breezed through it in one weekend, totally enthralled with story after story of ordinary people who have made extraordinary choices.

Guillebeau (who’s name I cannot spell correctly to save me life), has long been an inspiration of mine. I read his first book The Art of Non-Conformity and promptly tried to loan it to everyone I know who has even vaguely expressed an interest in living unconventionally. I met him once, at TBEX in Girona and basically fangirled out and lost the ability of speech. He was very nice even though I clearly looked like a moron.

Anyways, back to the book. In the Happiness of Pursuit, Guillebeau primarily talks about the idea of the quest. A quest, by Guillebeau’s definition at least, is a passionate undertaking with a set of rules and a clear end point. Guillebeau’s quest was to visit every country in the world by his 35th birthday, a feat he accomplished, and writes about in vignettes throughout the book.

A quest is meant to give you a purpose, to inspire personal growth and to be, well, fun! 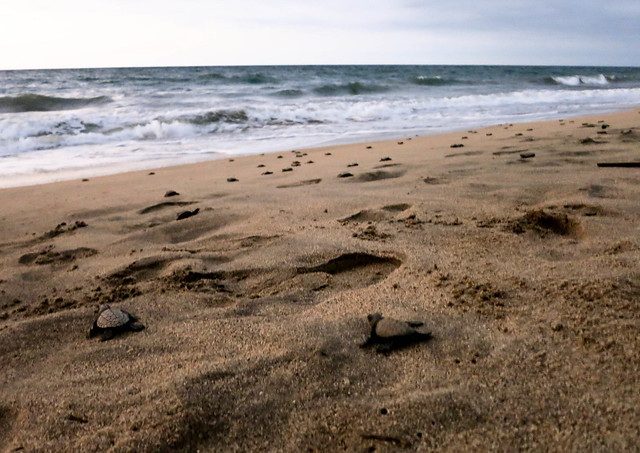 There are literally hundreds of examples in the book, including a few people I actually know personally. Here are a couple of my favorite examples of people who’ve undertaken marvelous quests.

Sasha Martin– set out to cook a traditional meal from every country in the world, and documented her experiences and recipes on her blog Global Table Adventure. Cooking the entire world (at the rate of 1 country a week) took her nearly 4 years, exposed her picky Oklahoma family to a whole world of possibilities and landed her a book deal.

Nate Damm– walked across America entirely on foot, camping and relying on the kindness of strangers. You can read about his adventures on his blog, Nate Walks America. He wrote a guide for perspective walkers and even made a second attempt at the walk later on. He also used to read this blog, but I am not sure if he still does…

Adam Warner– checked off a bucket list, but with a heartbreaking twist. The list was written by his late wife, Meghan, who passed away a month after they were married. Adam took it on himself to complete her list for her, including items like visit 30 countries, attend a Blue Jay’s game and learn to knit.

A lot of quests involve travel, but not all of them. The goal can be pretty much anything as long as it’s extraordinary, difficult to achieve, but not impossible. Through the course of the book Guillebeau outlines how to craft a quest and how to actually achieve those goals you set out for yourself.

Where is MY Quest?

Ultimately The Happiness of Pursuit is a powerful book because it left me inspired to make a change in my own life. Only I’m not sure what that change should be. I would like to have a quest of my own, something that I can pursue with passion.

But Stephanie, you say, you travel all the time, isn’t that basically a quest? Not really. I love travel, and my slapdash random approach is fun, but at this point it’s still my job. I don’t even have bucket list of items I’m trying to check off, I just go where wind and opportunity take me. Which as been great, but maybe I would feel more fulfilled if I was traveling with a purpose.

Some travelers I know have the goal of visiting every UNESCO site in the world, others have traveled overland from Alaska to Patagonia or hitchhiked across Canada. In the past I’ve rejected these sorts of projects for myself as needlessly competitive, but I’m coming around now. I would like to have a quest, something to pursue and check off as I slowly make my way around the world.

When it comes down to it, what I’m really looking for is direction. For this blog, for myself. I’m turning 30 this month and while I am actually pretty excited about starting a whole new decade, the future is stretched out before me like a giant question mark.

So I’m going to start brainstorming and hopefully an exciting mission will find me. Don’t worry, you will be sure to hear about it.

I’m giving away 1 copy of The Happiness of Pursuit to one of your lucky readers! (US-shipping only-sorry guys) Enter below by leaving a comment or following me on Twitter.

Deadline for the giveaway  is October 10th.

Disclosure: This post is sponsored by Random House. All opinions are my own.

26 thoughts on “In Search of a Quest: The Happiness of Pursuit by Chris Guillebeau (+Giveaway!)”