Amanda and I had an amazing time on our Great Coast Road Trip, but one of the best experiences almost didn’t happen. When I look back on all the adventure: cruising through Banff, feeding the bears and even the liquid nitrogen ice cream, it’s the stand up paddleboarding experience that I’m most grateful for.

Which is weird, considering how much I resisted the idea. I mean, I literally just spend 7 months in the Stand Up Paddleboarding (SUP) Capital of Mexico and never tried it. I totally meant to, I swear! Mike is already a huge fan and told me many times how much I would love it. I was just busy, and lazy, and then I blew out my back and well, excuses, excuses, it never happened.

SUP, in case you’re not familiar, is kind of a cross between kayaking and surfing. You stand on top of an oversized surfboard and use a paddle to steer. It’s a great workout that engages a lot of your core muscles, and can be either calming (some people even do yoga on their boards) or competitive. Sayulita had several international SUP races while we were there and they looked intense.

7 months in sun-drenched Mexico. How ironic my second chance would come in chilly, drizzly Canada.

We arrived in Sun Peaks during the height of off season. It was too warm to ski, but too cold to do much of anything else. A couple of weeks later and the town would be full of warm weather hikers, golfers and partiers, but at the moment it was unequivocally deserted. And frigid. And kind of rainy, all of which made me less enthusiastic about our schedule SUP lesson the next morning (the fact that it was raining on us in SUN Peaks was not lost on me).

Amanda’s lukewarm non-endorsement of the sport didn’t help: “It’s hard. You will definitely fall in.” Near the end of our trip, tired and not looking forward to the idea of being soaked in a freezing mountain lake, we considered calling to cancel several times that night. Ultimately we decided to suck it up and give it the old travel blogger try. 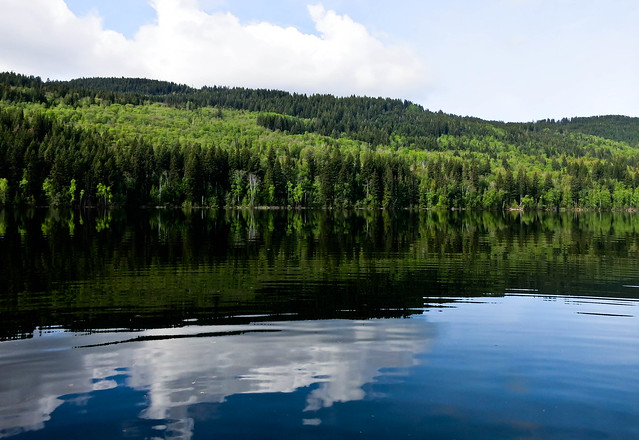 I’m so glad we did. By the morning the sky was looking clear and blue and the temperature began to rise as we drove down the mountain to Heffley Lake. We were greeted warmly by Bodie Shapiro, the owner of Surfit. Like so many surfers I have met, Bodie was preternaturally chilled out. As one of the very first certified paddleboard instructors in North America, he’s basically a SUP evangelist, and was determined to show us a good time.

Of course it didn’t hurt that Heffley Lake was gorgeous and as calm as the face of a mirror. A very different experience, I suspect, than trying to stand up in the raging waves in Sayulita. After showing us the basics, Bodie set us afloat on our boards and encouraged us not to stand until we felt ready. 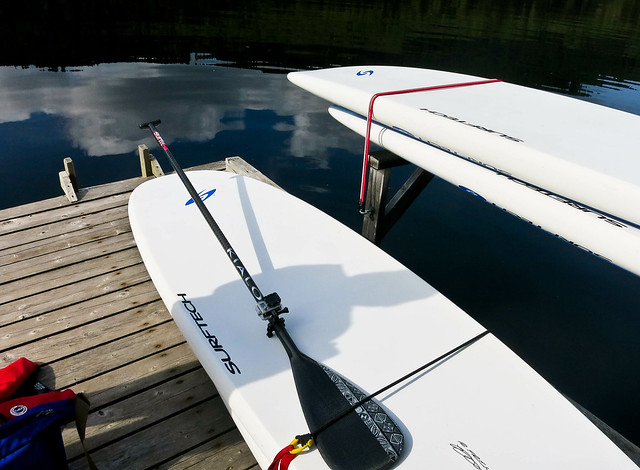 A few minutes later I was wobbling on my board, suffering from what Bodie called “sewing machine legs” and my body struggled to find it’s center of balance. To my delight I stayed standing, knees bent, body hunched slight forward. We paddled around the lake slowly, spotting a bald eagle nest here, a delicate crane there. At some points the water was perfectly clear, and only the occasional passing motorboat disturbed the water. We chatted about SUP, about Sayulita (Bodie’s been, of course), and about social media.

We cruised around for about an hour, until some ominous thunder chased us back to the dock. We had a great time, but the even bigger miracle: Neither Amanda or I fell in. Considering my general clumsiness and lack of physical aptitude, I suspect Bodie might be some kind of sorcerer.

In any case I’m very grateful. Sometimes experiences really are the best souvenirs. I learned a skill that morning that I think will be useful for a long time. We’re not planning on returning to Sayulita, but SUP might turn out to be a future hobby of mine in our next long-term destination (details soon!). It’s calming, it’s fun and yeah, it’s a pretty good workout too.

I’m pretty sure I’ll fall in next time though.

Have you been stand up paddleboarding?

This trip was sponsored by Coast Hotels and Zipcar. All opinions and Bodie-related fangirling are my own.

13 thoughts on “Stand Up Paddleboarding in British Colombia”