After touching down in Manila’s international airport, I lugged my backpack around in circles searching for a minibus, or jeepny as they call them in the Philippines, to the nearest subway station. With sweat running down my face, I squinted at every packed bus that drove by. Bus, after bus, after bus I couldn’t seem to find the right one.

After about thirty minutes I learned from a security guard that the jeepneys to the subway don’t stop by terminal three, they’re at terminal one. He cautioned me that with Manila’s traffic, a shuttle to terminal one and a jeepny to the subway might take me close to two hours. TWO HOURS?! 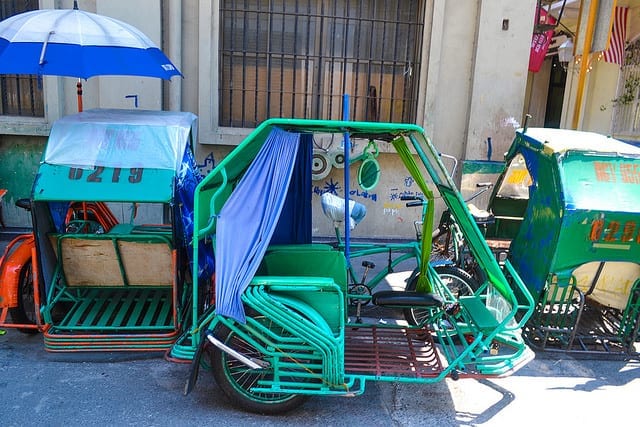 Well then… taxi it is! I spent another twenty minutes looking for a white taxi. You see, the yellow airport taxis are much more expensive, and as a budget traveler, I wasn’t about to pay way more pesos for the same exact ride. After asking around, I finally found them on the opposite side of the airport and up a flight of stairs. You’d think they would have signs or something, but apparently not.

When I finally hopped in the nice, air-conditioned cab my driver turned back to me. “Twenty pesos for the airport,” he demanded. I did my research. I knew the fee was a scam so I refused to pay and he didn’t push the issue further.

Relieved, I sank into my seat and shut my eyes. We zoomed through the airport and onto the highway until the car screeched to a sudden halt. Traffic. Over the course of an hour, we inched slowly through the never-ending wall of cars. While I felt bad for myself, I felt even worse for the driver. Manila’s taxis only charge based on distance, not time.

My driver was a bit annoyed when I told him to take me to the nearest subway stop instead of my hostel, but there was no way I was taking that taxi through the entire city!

When I finally exited the packed subway in my downtown Manila neighborhood, I stumbled along the side of the road, trying not to get hit by the cars whizzing by. Choking on the humidity, exhaust, and pollution, I wondered: Should I visit Manila at all?

Skip Manila. That’s what everyone on the backpacker route told me. Don’t bother. It’s polluted, the traffic is awful, the food is bad and the only thing to do there is shop.

Did I make a mistake? Should I have skipped Manila?

With three full days to visit Manila, I decided to make the most of it. I am a travel blogger after all.

Making the Most of Manila 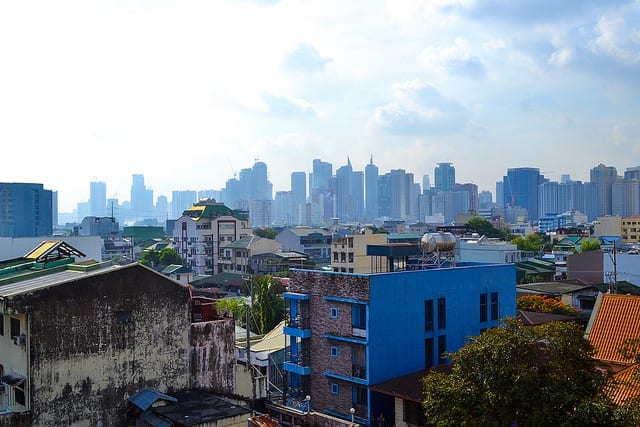 Sure, Manila has its faults and it’s not my favorite Southeast Asian city, but should you really not visit Manila?

After three full days exploring the city and surrounding area, I would say no.

There are so many things to do and see in Manila, the city is worth at least a few days. I had a great time exploring this bustling Filipino capital, and I’m actually very excited to return again in the fall.

Here is why it is worth your time to visit Manila 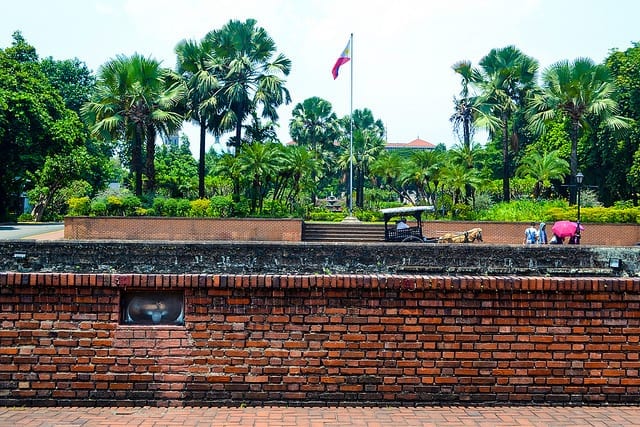 By far my favorite part of Manila is the city’s Spanish old town, Intramuros. Filled with churches, horse-drawn carriages, and picturesque gardens, Intramuros is an escape from Manila’s chaos.

While most of this walled city was destroyed in WII, the entire area has been restored to its former beauty. Overall, I would definitely recommend wandering around Fort Santiago, the San Agustin Church and Casa Manila, a reproduction of the old lavish colonial style homes.

By far my absolute favorite part of my trip to Manila was Carlos Celdran’s Walk This Way tour. At first, I wondered how so many people could possibly attend one walking tour, but then I realized that it’s less of a tour and more of a show. Carlos uses theater, comedy and a dash of sarcasm to teach you all about Manila’s history from start to finish. He has props, throws candy at you, and ends the tour with halo halo dessert! I’ve never been so entertained learning history, and I came away knowing so much more about the city than I ever learned in school. 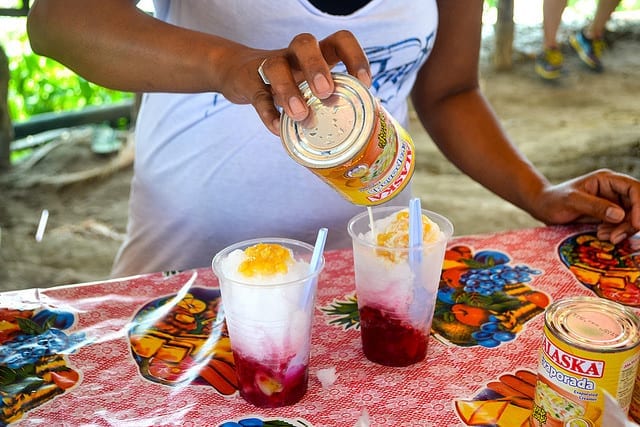 From chill pubs and stunning rooftop cocktail bars to crazy clubs and a vibrant live music scene, Manila has it all. An entire night out can cost just a few USD with cheap drinks and minimal entry fees. While I did accidentally wander into a bar with a very obvious level of prostitution, that situation is easily avoidable if you know where to go. Have a drink and relax with a view of the city, or party the night away with Manila’s wild college students. It’s up to you! 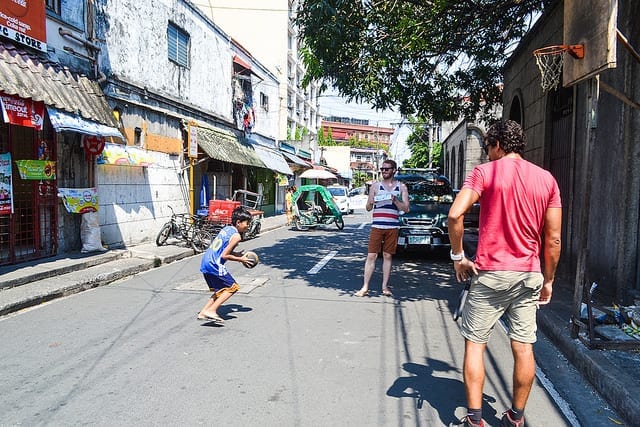 One night my friend and I got a bit lost coming home from dinner and stumbled on a group of women sitting outside on the street. The women turned out to be the neighborhood night watch ladies, which basically meant they sat outside all night drinking and chatting with each other, while also preventing crime in their neighborhood.

They invited us to sit with them, brought us balut to try, and gave us their phone number to meet up later. At the end of my trip when I stopped by Manila for a day, I met up with one of the women from the group. While she’s only a few years older than me, she already has two children and was about to move to Kuwait to take a job in a hotel. We talked over dinner about her struggles leaving her kids behind, and her hopes for the future and her family. This girl was so nice; she even accompanied me to the airport!

Manila has a HUGE shopping culture. Boasting the Mall of Asia, one of the biggest shopping malls in the world, as well as many other fancy stores in the posh Makati neighborhood, there’s nothing here you can’t find for a good price.

Even if you’re backpacking long-term, it’s worth wandering around the malls just to see the consumerism for yourself. I had a great time window shopping and people watching in the Mall of Asia for a few hours. When in Rome, right? 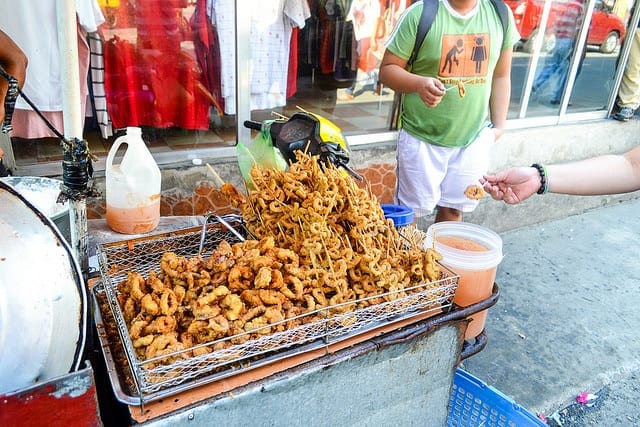 While a few bloggers have complained about Manila’s food in the past, the capital actually has a great foodie scene. Unfortunately, the food here isn’t quite as cheap as Thailand and Vietnam, but there’s plenty of amazing restaurants to be found if you ask around.

To be honest, at first, I had a really hard time finding good places to eat that weren’t fast food. Part of this had to do with the neighborhood I was staying in, which wasn’t the nicest place in the world. However, once I started asking the locals, I had amazing and affordable Filipino and international cuisine!

I tasted traditional dishes at a nice restaurant in Intramuros and cheap BBQ at a small street-side restaurant. I sampled incredible seafood at a beautiful waterside restaurant while watching the sunset, and ate Middle Eastern cuisine while smoking shisha with my hostel owner.

The trick to Manila’s food scene is to just ask the locals where to go. The only local advice I disagree with is the city’s love of buffets. While they’re famous in Manila, I didn’t think the food was that great, and I didn’t really get my money’s worth either. 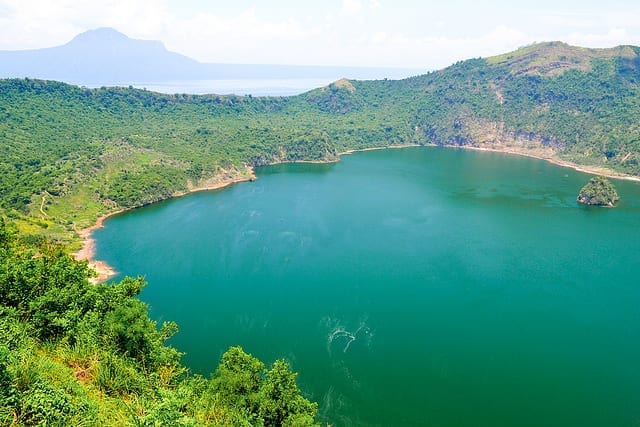 While in Manila I took a trip to the Taal Volcano, the world’s smallest active volcano. Only about an hour away from the city, the volcano boasts a sulfur lake in the center with a tiny island! The locals’ joke that it’s an island in a lake, in a volcano, in a lake, on an island.

While the top of the volcano was beautiful, the tour from my hostel was pretty disorganized, which is par for the course in the Philippines. Also, since most people take horses to the top, the hike was ridiculously hot and dusty. I had dirt on my teeth! At least it was an adventure.

Aside from the Taal, you can also take a trip to Batangas, which has great beaches and diving spots. Since Batangas is about 2-3 hours from Manila, I recommend making a longer trip out of it by also visiting Puerto Galera. Here you’ll find white sandy beaches, tropical forests, waterfalls and incredible scuba diving.

Honestly, Manila’s sunsets are the most beautiful sunsets I’ve ever seen in a city. I recommend heading to the waterfront for a perfect view. However, I also enjoyed watching them from my hostel’s rooftop pool!

Overall, Manila isn’t my favorite city in all of Asia, but it’s also not the boring, dangerous, dirty cesspool that many people (including travel bloggers) make it out to be. There’s plenty to do, see, and eat in this city to keep you busy for at least two or three days.

While it might seem like everyone is telling you to not visit Manila, but go with your gut. If you have a few days to spare, and you can keep an open mind, Manila might just surprise you.

Have we convinced you to take some time to visit Manila?  If so, why not check out these places to stay:

If you have ever wanted to be 26 floors up with stunning views in the heart of Manila than Eton Baypark Tower is the apartment to book when you visit Manila.  This apartment is perfect for a couple or a family traveling together or even a group of friends looking to share a place.  Not only is the apartment located about Rizal Park in the heart of Manila but it is also walking distance to Manila Ocean Park.

Pan Pacific Manila is the perfect spot if you are looking for luxury with the classic hotel amenities like an outdoor pool, butler services, jacuzzi, sauna and gym.  Located close to Pedro Gil LRT Station this is an ideal place to base yourself while you visit Manila.  The elegant rooms offer either Bay views or city views so you can relax in style.

Are you looking for a modern hotel with all the amenities in the heart of it all that won’t break your bank?  Well, then you have to check out Hotel H2O in Manila’s Ocean Park.  The hotel draws influence from the Ocean Park where they are based with aquatic elements in all of the rooms including aquariums in some of the rooms!  Did we mention that there is also an outdoor pool and sauna as well?

Traveler, expat and spicy food lover, Richelle has been living and working in China for the last three years. In her spare time, she loves salsa dancing, scuba diving and stuffing her face with street food. For more expat advice and crazy travel stories, find her at Adventures Around Asia or on Facebook, Twitter, Instagram, Pinterest or on SnapChat at Adventures_Asia 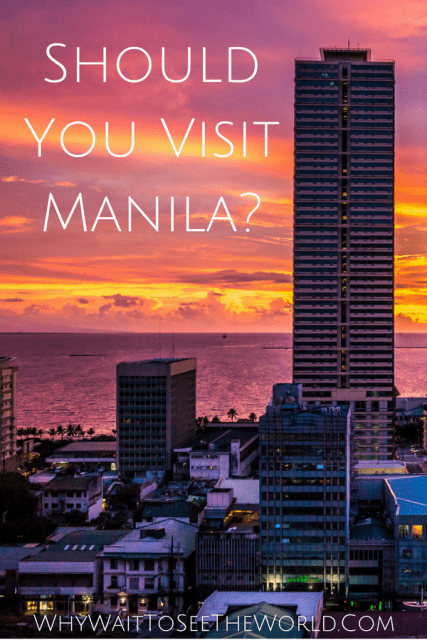 3 thoughts on “Should You Visit Manila?”