When we approached the Free Spool Too, Captain Dennis Forgione had a huge grin in a face weathered by sea and sun.

“Sorry for the delay,” he said. “We gotta save this fucking boat from sinking. When I got here this morning, the first mate was bullshitting around with my mate. Dumb ass.”

Forgione ran over to assist with the sinking ship, whose mast was only slightly listing. Only an experienced waterman would have even noticed.

After preventing the demise of his neighbor’s boat, we boarded Free Spool Too, where Forgione’s tenacious first mate, Mike, sprinted around the boat, setting up rods and stringing up the bait. “Hopefully, we’ll murder some fucking dolphin,” he shouted with a dolphin-killing grin. 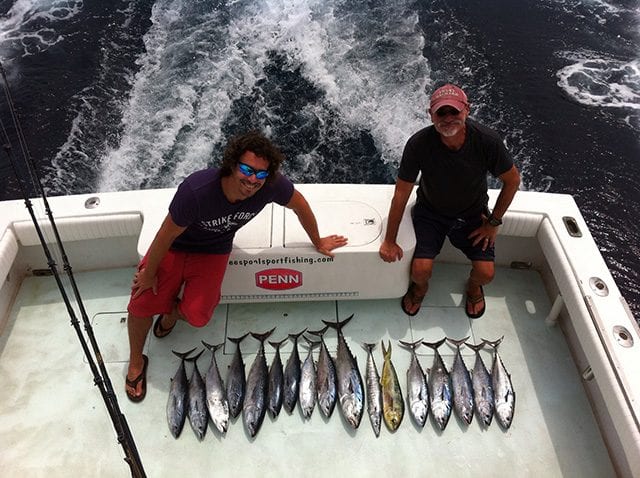 My father looked at me, his eyebrows lifting to where hair hadn’t grown in decades.

“Why do you call it dolphin?” I asked just to make sure that all of the progress I had made as a boy checking tuna cans would not have been undone by this deep sea fishing trip. 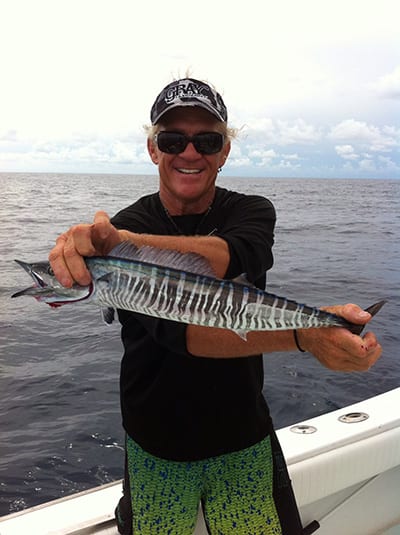 On the highest level of the tuna tower, Forgione scanned the waters for bait fish. Mike ran to the bow with a weighted net, positioned himself, and then tossed in the net, scoring a few dozen sardines. He peeled most off and tossed them into the filled tanks at the back of the boat; others were left to die on deck.

More than a dozen rods stood at attention as we drove through the Haulover Inlet out to sea. The view of Sunny Isles was picturesque: turquoise waters, beige sand, and towers that pointed to the bluest sky like avant garde missiles.

Then, two of the rods bent. Mike and the captain reeled them in. Two more indicated fish and my father and I were fitted with belts. We placed the butt of the rod into the rod holder on the belt and fought whatever it was on the other end of the line. Our team had nabbed four blue and silver tunnies. 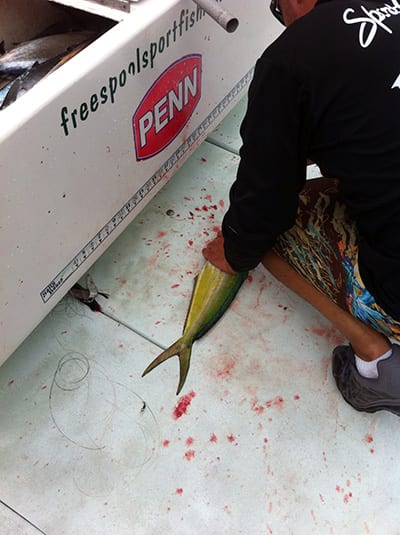 “It’ll be like an assembly line,” Mike said as he cut up one fish for bait and tossed the guts to the trailing gulls. “I keep handing you a rod and you keep reeling these fuckers in.” He spat brown into the sea; the dip packed into his lip made his smile look like a pugilist’s. The resemblance was apropos, as fishing was a sport best suited for a fighter.

Mike and the captain did most of the work: they selected the best bait, set up the rods, watched the waters for movement. My father and I only turned the reels. (I would have liked to do more.) But even that simple sounding task was exhausting as the ten-pounders knew how to battle, allowing me to finally respect (somewhat) what I had always considered a dreadful read: The Old Man and the Sea.

We kept pulling in tunnies and once managed to catch a black-and-blue-striped Wahoo. When we reeled in our first mahi mahi, which wound up being an inch too short, Mike jiggled out the hook and blood sprayed the deck. 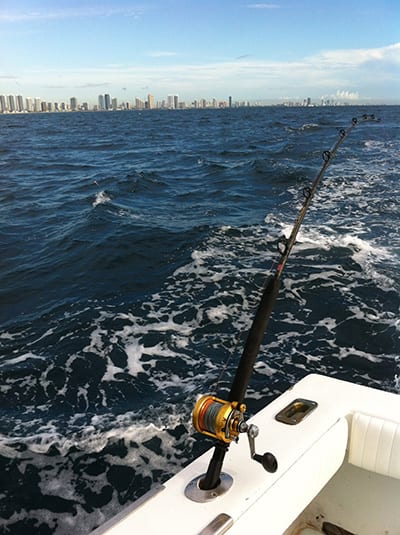 “You see how much blood poured out from that guy,” Mike said. “Sometimes we catch five or six fish at once. It looks like we killed someone back here.”

“You could kill someone out here,” my father whispered, keeping an eye on Mike, who was enjoying the butchering a bit too much.

He spat his dip into the sea once more and offered a hearty and celebratory “Fuck, yeah” to the ocean.